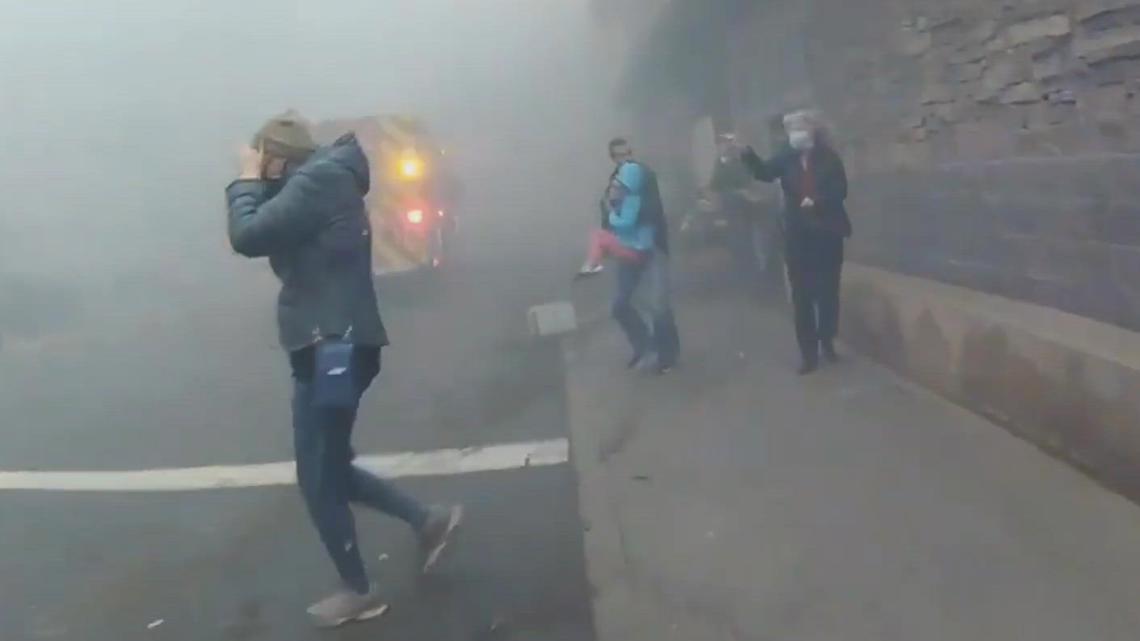 The Boulder County Sheriff’s Office shared video clips of deputies’ heroic efforts to evacuate neighborhoods in the path of the quick-moving flames.

In the bodycam clips, you can see and hear BCSO deputies moving quickly, knocking from door-to-door to hurriedly evacuate people, pets, livestock and businesses in the path of the massive and quick-moving flames.

“Sheriff’s office, sheriff’s office,” yelled deputies announcing to homeowners they should evacuate quickly as they moved from home to home, knocking and ringing doorbells.

Sheriff’s deputies evacuated the Costco store near old town Superior – as the smoke from the Marshall Fire took over the shopping center.

In the video clip, you can hear deputies running through the Costco store, yelling to customers to evacuate the store immediately because of the encroaching flames nearing the back of the store.

At the end of this clip, a customer speaking Spanish tells the deputy she doesn’t have a car to evacuate, and he lets her get into the back of his patrol car.

The time stamp on the video from the Costco reads 12:10 p.m. – about 50 minutes after the first dispatch call that alerted fire crews to a fire miles to the west at Highway 93 and Marshall Road.

>> Below: Boulder County deputies knock on doors to evacuate people during Marshall Fire

At 1:35 p.m., a deputy helps evacuate a woman, two cats and a dog. “Bring whatever’s absolutely essential, I don’t have much room, but we can fit what we can. I’ll grab this,” a deputy tells the homeowner.

The deputy continues to direct neighborhood traffic to evacuate the area and jumps into his car – driving through active flames surrounding the neighborhood and exiting multiple times to ring on doorbells to warn people to evacuate.

You can even hear the deputy coughing from the smoke as he continues to franticly knock on the front doors. “Ma’am, you have to evacuate,” he says to a homeowner.

In the video, at 12:34 p.m., a home is already on fire as a deputy runs to the front door across the street and rings the doorbell and runs off.

In one of the calmest videos released by BCSO at 3:17 p.m., deputies help to hurriedly move horses out of their stables and the video clips to deputies who stop to grab a couple of loose dogs – staying with it until a second dog shows up and finally allows itself to be rescued and placed in a patrol car.

>> Below: Animals being evacuated during Marshall Fire by Boulder County deputies

The last video shared by the sheriff’s office is at 6 p.m. and shows a sheriff’s patrol car driving through an unidentified neighborhood with fire glow on all sides.

Several fire survivors said the heroic work of those first responders is how they found out they needed to evacuate. They did not hear from the evacuation notification system the county used to send out alerts.

Boulder County relies on an opt-in system called Everbridge, which only reaches cell phones if you sign up.

Boulder County does have access to FEMA’s system, which sends Amber-alert style notifications they started using in 2019 but said the pandemic prevented them from setting it up.