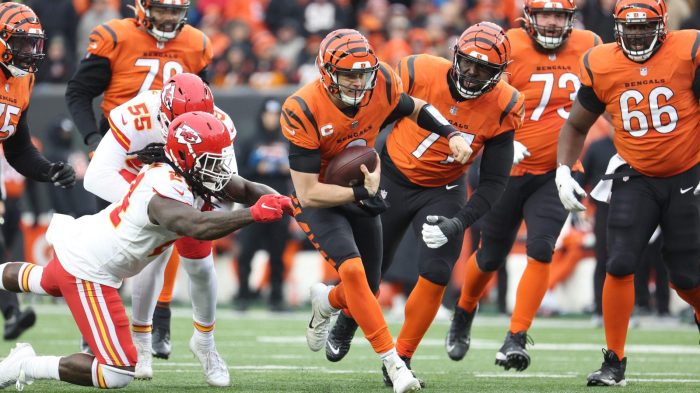 Twitter was rooting for Las Vegas to end its 2021 regular season on Sunday with a quarterback kneel and tie, but the Raiders had a business decision to make: Tie, and open the playoffs against the No. 2 seed Kansas City Chiefs, who’ve outscored them 89-23 this season? Or win and face the No. 4 seed Cincinnati Bengals?

Having kicker Daniel Carlson send the Raiders to Ohio instead of Missouri might have been a good call for the Raiders — but it was great for the Bengals.

The Bengals have been one of the hottest teams in the AFC over the last third of the season, buoyed by second-year quarterback Joe Burrow and rookie wideout Ja’Marr Chase — whose chemistry as LSU teammates has been no less explosive in the NFL. They clinched the AFC North, one of the most competitive divisions of the 32-team era, in Week 17 with a win over Kansas City. And because the Raiders won, Cincinnati has an easier path to the conference championship.

The two teams combined for 889 yards from scrimmage, the 15th-most of any game this year.

“>1 completed Cincinnati’s seasonlong sweep of AFC playoff teams. That 4-0 record includes the Bengals’ 32-13 win over the Raiders in Week 11 — a win that kicked off a 5-2 run between their bye and the final week of the regular season.

After clinching against the Chiefs, Cincinnati took its foot off the gas in Week 18. Many key starters sat for their meaningless loss to the Cleveland Browns, and Chase played just long enough to break the Bengals’ franchise record for single-season receiving yards. But over the previous seven-week stretch, the Bengals were better across the board than most of their playoff rivals:

But as dangerous as the Bengals were down the stretch, it’s still to their advantage to dodge as many of the AFC’s traditional powers as possible.

If the Raiders had tied or lost against the L.A. Chargers, the 10-7 New England Patriots would have been the No. 5 seed and bound for Cincinnati. The Bengals would have had only a 60 percent shot to beat the Patriots, according to FiveThirtyEight’s Elo predictions, instead of a 74 percent likelihood of advancing past the Raiders.

Meanwhile, the Pats must now travel to Buffalo with only a 30 percent chance of winning. Considering the Chiefs’ huge advantage over the Pittsburgh Steelers, there’s a 60.2 percent chance that if the Bengals win, all the AFC wild cards will lose. And as the No. 4 seed, the Bengals would then face the top-seeded Tennessee Titans — whose quarterback-adjusted Elo rating of 1590 (as opposed to the Chiefs’ 1689) is only 20 points higher than Cincinnati’s. This further clearing of the Bengals’ path to the AFC championship game is actually thanks to another Week 18 near-miss.

The Houston Texans went on a surprise 25-7 second-half run against the Titans, twice getting within a field goal of tying Tennessee. Had Ryan Tannehill and Julio Jones not preserved the Titans’ lead, the Chiefs — significantly stronger than Tennessee by Elo, Football Outsiders’ Defense-adjusted Value Over Average (DVOA), Jeff Sagarin’s ratings and Pro Football Focus’s point-spread power rankings — would have been the Bengals’ likely second-round opponent.

The Titans did lose to the Texans in Week 11. Throw in losses to the Steelers and Patriots, plus a close shave against the San Francisco 49ers, and it’s no wonder that over the same Week 11-to-Week 17 stretch, the Titans ranked fifth in scoring margin out of seven AFC playoff teams. That’s the team most likely to be standing between the Bengals and a conference-title berth. And if it is Kansas City? Well, Cincinnati just beat them two weeks ago.

Here’s the full breakdown on how our model sees the Bengals’ chances in each of the what-if scenarios:

Anything can happen when toe meets leather and pads start cracking this wild-card weekend. Maybe the Steelers upset the Chiefs. Maybe the Patriots re-enact Week 13’s physically dominant win over the Bills in Buffalo. Maybe the Raiders pay the Bengals back for that Week 11 loss. But before it spent Week 18 cooling its heels, Cincinnati’s red-hot play was inspiring national headlines about whether it was “the best team in the AFC,” or “the team nobody wants to face.”

According to our model, the Raiders did get a better matchup by playing to win on Sunday night; they would have had only a 14 percent chance of upsetting the Chiefs. But they still only have a 26 percent chance of making it out of Cincinnati. Because the Raiders volunteered to face them, the Bengals’ odds of winning their first playoff game since before the reunification of Germany went significantly up — and Burrow and Chase will get the chance to personally thank them.

Check out our latest NFL predictions.