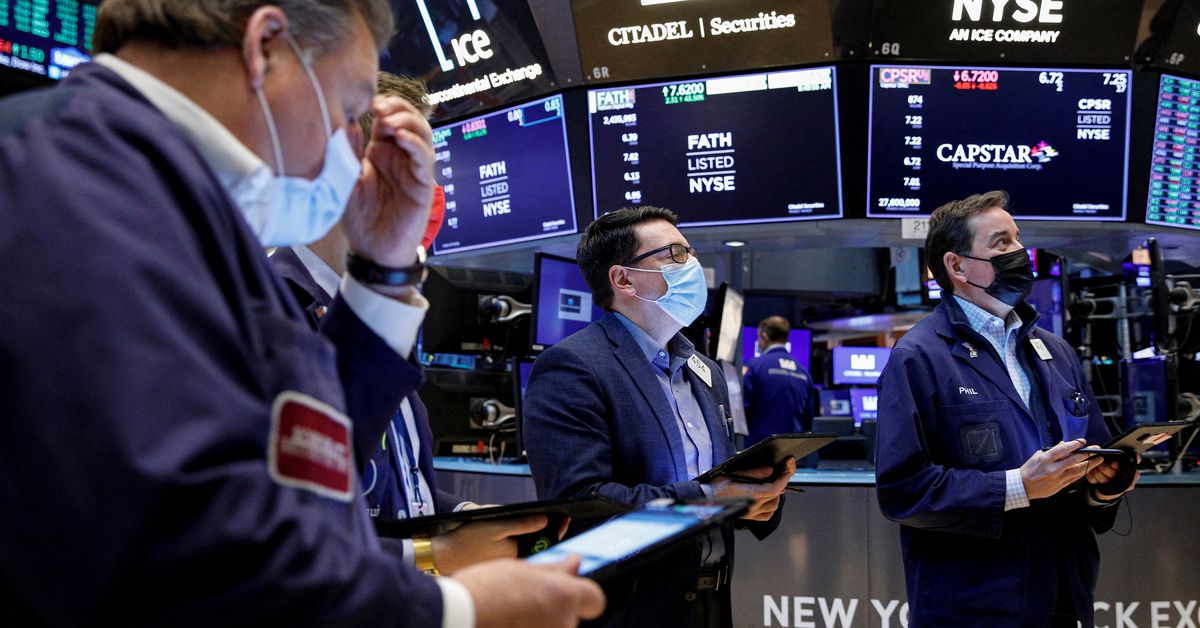 Jan 13 (Reuters) – The Nasdaq and S&P 500 were falling on Thursday as investors took profits from technology stocks ahead of the fourth quarter earnings season and after a three-session rally.

Among the S&P’s 11 major sectors, technology (.SPLRCT) was the biggest drag on the index followed by healthcare (.SPXHC) and then consumer discretionary (.SPLRCD).

The technology-laden Nasdaq had risen 1.7% in the last three sessions after falling 5.7% in the four prior trading days as investors watched the direction of interest rates. The prospect of Federal Reserve interest rate hikes this year is a concern to growth sectors such as technology and consumer discretionary.

Even though U.S. Treasury 10-year yields were falling on Thursday, investors went ahead and took their profits in Nasdaq stocks, according to Sameer Samana, senior global market strategist at Wells Fargo Investment Institute in St. Louis.

“We had a pretty nice rebound in the Nasdaq the last few days, so there might just be some lingering nervousness around rates the Fed and some profit taking, especially ahead of earnings,” said the strategist.

Companies will report results on the final quarter of 2021 in the coming weeks with banks JPMorgan Chase (JPM.N), Citigroup (C.N) and Wells Fargo due to get the ball rolling on Friday, while big technology companies report next week.

Year-over-year earnings growth from S&P 500 companies were expected to be lower in the fourth quarter compared with the first three quarters but still strong at 22.4%, according to IBES data from Refinitiv. read more

With the focus on Thursday turning to more value-oriented stocks, the S&P 500 banks index (.SPXBK) rose 0.6%, hitting a record high during the session.

Retail investors have also raised their exposure to bank stocks ahead of the earnings announcements, according to Vanda Research’s weekly report on retail flows.

Also, data showed the producer price index (PPI) rise 0.2% last month after advancing 0.8% in November while in the 12 months through December, the PPI rose 9.7% versus the 9.8% forecast of economists polled by Reuters. read more

Fed Governor Lael Brainard said the U.S. central bank would be in a position to start what could be several interest rate hikes this year “as soon as” it completes winding down its bond purchases, expected to happen in March.

Advancing issues outnumbered declining ones on the NYSE by a 1.25-to-1 ratio; on Nasdaq, a 1.51-to-1 ratio favored decliners.