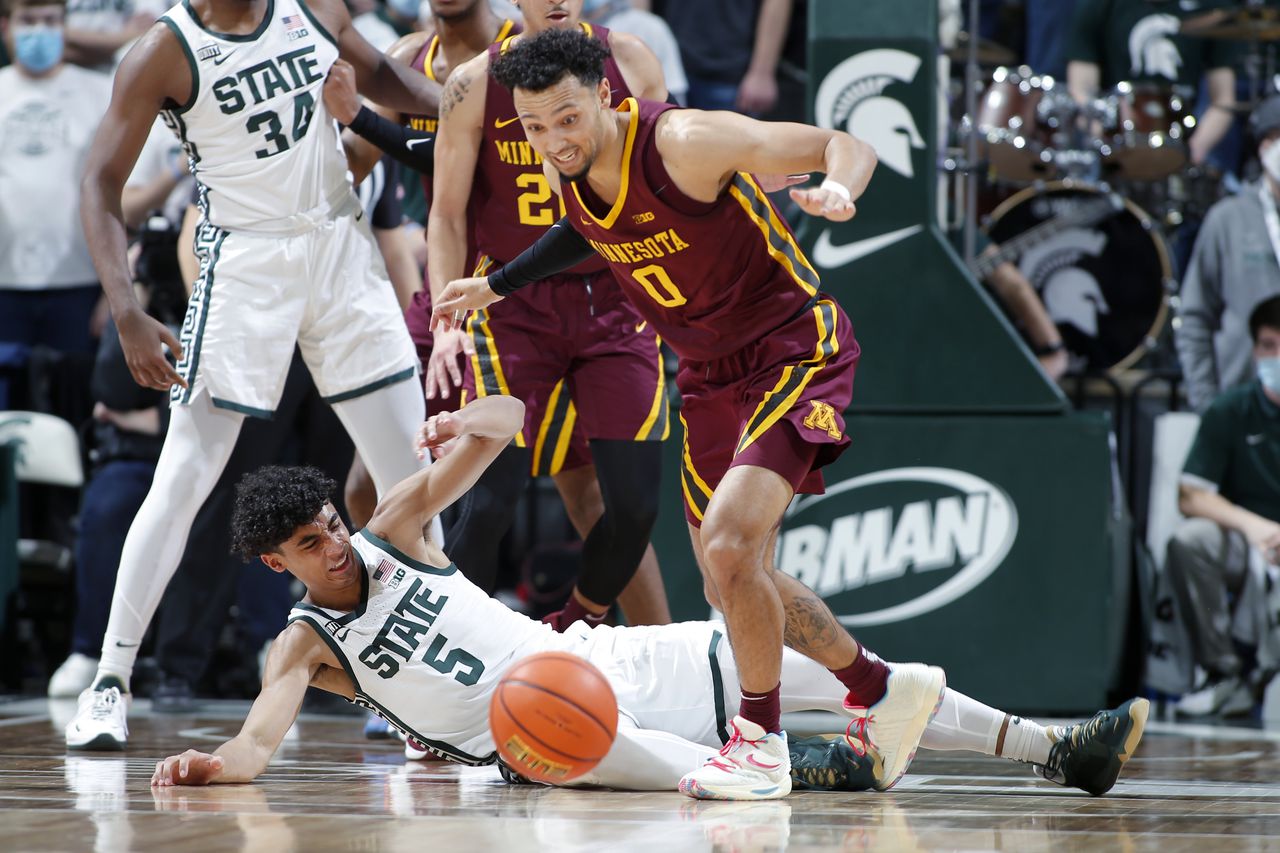 The Spartans’ junior forward recorded a lay-in with less than one second left on a pass from A.J. Hoggard to send Michigan State to a 71-69 win over Minnesota on Wednesday night at the Breslin Center.

The win extended the No. 10 Spartans’ win streak to nine games in thrilling fashion.

Minnesota (10-4, 1-4) came back from five points down in the final 90 seconds of regulation to tie the game on a free throw with 25 seconds left to set up Hauser’s heroics.

After calling timeout at halfcourt, Michigan State got the ball to Hoggard, who drove the lane and drew the defense to him, then found Hauser for a short basket.

Michigan State (14-2, 5-0) was able to get the final basket after fending off a Minnesota team that charged back time and again.

After Minnesota pulled to within one at 3:32, Hoggard hit a pullup jumper in the lane and Max Christie sprinted around a screen to catch and shoot a jump shot that put the Spartans up by five with 2:21 left.

But the Spartans missed their next three shots, as Minnesota climbed back despite a significant personnel loss. Gophers center Eric Curry scored 19 points but was carried off the floor with 59 seconds left in a significant late blow to Minnesota’s chances.

Hoggard and Christie were part of a five-player Spartans bunch that played nearly the entire final 10 minutes without substitution.

Hoggard played the entire final 10 minutes of the game at point guard as starter Tyson Walker sat on the bench, and the Spartans played Hauser at center down the entire stretch in place of Marcus Bingham Jr.

Malik Hall also played down the stretch, and after a scoreless first 31 minutes he hit three shots in a stretch of less than three minutes starting with 7:34 left to help stretch a one-point lead to more than six.

But Minnesota was able to come back as it did time after time in a tough road environment.

Michigan State led by as many as 10 in the first half before Minnesota closed the half on a 14-7 run to pull within one possession at the break.

Despite its best efforts, the Spartans couldn’t shake the underdog Gophers in the earlygoing of the second half.

The Spartans took a six-point lead thanks to a Minnesota flagrant foul with 15 minutes left, but the Gophers hit back-to-back shots to pull back within one.

Walker answered with a midrange jumper and then swished a catch-and-shoot 3-pointer to force a Minnesota timeout at 13:08.

Out of that timeout, Jameson Battle hit a turnaround jumper and the Gophers scored on a fast break off of a Walker turnover. Battle hit another baseline jumper at 11:10 to tie the game for the first time, and Minnesota took the lead a minute later.

A Hauser putback at 4:28 put the Spartans ahead by five again. But, as it did throughout the second half, Minnesota answered big shots and quieted the Breslin Center crowd just after it got loud. Back-to-back short baskets from Curry and E.J. Stephens made it a one-point game again with 3:32 left, setting up a thrilling finish.

Christie scored a team-high 16 points and now has four straight games in double figures. After recording a career-best 21 points last week against Nebraska, Christie hit a pair of first half 3-pointers ad added a transition dunk to get to double figures by halftime.

A Minnesota team that ranked second-to-last in the country with less than six offensive rebounds per game recorded 12 against the Spartans, twice Michigan State’s total.

Michigan State was playing after seven days off, following the cancelation of its scheduled Saturday game against Michigan due to COVID-19 cases in the Wolverines’ program.

The Spartans will remain at home when they host Northwestern on Saturday.