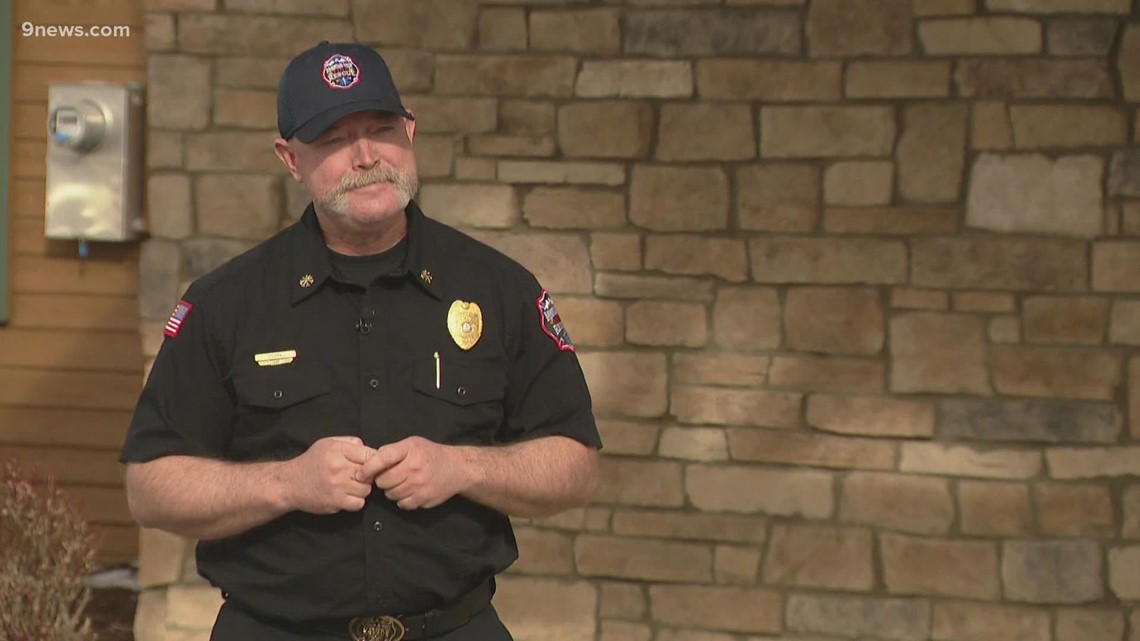 Sterling Folden is the Deputy Chief of Mountain View Fire and Rescue. On Dec. 30, he was acting chief and among the first on scene where the fire started.

SUPERIOR, Colo. — Imagine the worst case scenario at your job.

Think back to all the decisions that could have played out differently.

Unless those situations are life or death, you have it easier than Mountain View Fire and Rescue Deputy Chief Sterling Folden.

“It was difficult because the Middle Fork Fire had started, and so there were a lot of units traveling north to Boulder, away from where we needed them at that point, so we were trying to turn a lot of those units around because our fire had started to become a priority over that one,” said Folden.

On Dec. 30, Folden was acting chief as Chief Dan Beebe was out of town.

Folden was on a vacation day himself, but went to work as the Middle Fork Fire started on North Foothills Parkway, north of Boulder.

He quickly diverted to a new fire on South Foothills Parkway, south of Boulder.

“As I was leaving my neighborhood, when they called for additional units down south at Marshall and Highway 93, I turned around and went that way,” said Folden. “I think I got there around 11:15-11:20, somewhere in there.”

Based on viewer video provided to Next with Kyle Clark, smoke could be seen coming from the Twelve Tribes property around that time.

RELATED: A couch they didn’t want, fits everything they need

Visibility was much worse as Folden drove to the fire from the east, from Cherryvale Road and Marshall Road.

“The way that I approached from, you couldn’t much because of smoke and dirt that was blowing so much, so it was hard to see past the hood at the time,” said Folden.

Because he came from the east, he never saw the shed on fire near Highway 93.

He did see a home on fire on the hilltop of the Twelve Tribes property.

“When I pulled up, I didn’t see much because the wind was so strong. There was already one structure on fire,” said Folden.

As soon as he established his bearings, Folden was told the fire jumped from where he had just arrived.

RELATED: How climate change contributed to the Marshall Fire

“It happened that fast. Arrive on the fire, get a little situational awareness, have a quick conversation that there’s fire behind us and turn around and there’s fire going across the road I just came in on,” said Folden. “When I turned around, there was, indeed, lots of fire behind us, and it was crossing Cherryvale Road to the point where you couldn’t drive down Cherryvale anymore.”

Imagine the worst case scenario in your job.

“It’s interesting because it becomes stressful very quickly. You can’t do it alone. We rely on a team to do it,” said Folden. “It’s a good group of people. We don’t have to offer a lot of direction to our crews, they kind of jump in and start getting done what they know needs to get done, so that helps a lot.”

Based on information provided by the Boulder County Sheriff’s Office, the area he was in would receive a reverse notification evacuation order at 11:47 a.m.

“They had already been ordering evacuation notices east, everything east of this point please evacuate, right? Which included original town Superior, they were starting to get evacuation notices,” said Folden.

As we have pointed out, the Everbridge reverse notification system that Boulder County utilizes automatically calls landlines, but only reaches cell phones and email addresses if the resident has signed up and opted-in to the service.

“You’re so busy trying to get people out or make a plan to try to get your arms around it, that that thought in my head didn’t really hit me, that original town Superior is, like, going to be gone, right? That never triggered on me that soon in the event,” said Folden.

How do you game plan a fire that is playing by different rules?

“Notify people of what’s happening and don’t get anybody hurt, if possible,” said Folden. “Don’t put yourself in a situation where you can’t continue to help people was, kind of, our direction to everybody.”

Two people died in the fire, including Robert Sharpe, a Marshall resident.

It is normal to second guess decisions made.

“I’ve spent several nights awake at night, lying in bed, thinking about what could I have done different? What should we have done different? What could we do? And from a response standpoint, I play that back in my head a lot, like ‘aah!’ And there’s not a lot I would have done different right off the get-go,” said Folden. “As the event started getting bigger and bigger and it becoming more and more chaotic, to be honest with you, that’s where I start to question like, ‘what could I have done better in this situation?’ And it’s tough to figure out. I can’t see past the hood of my car. There’s so much radio traffic, I can’t talk to other units clearly and effectively. And now we have neighboring agencies that it’s difficult to talk to on the radio.”

He talked about just dealing with the gravity of the disaster.

“I have to think about the continuation of government for towns, right? Like how do we make sure their infrastructure is surviving this?” said Folden. “How do we keep Town Hall functioning because all their records and their servers and all those things are in there and so we need to dedicate resources to that. When you have extremely limited resources, and I’m counting the number of engines I was able to use on one hand, it’s tough. It’s tough to make those decisions.”

As was the Tesla building east of McCaslin Boulevard and Marshall Road.

“Where can I have the most impact? Picking out target hazards. If I let this building go, will it cause a hazmat situation that we have to cleanup for days or months? I want to save every home that I possibly can, but I might be better spent saving, for instance, the Tesla dealer. And I’m sure people question why we did that, but with all the batteries and everything, that’s a large hazmat situation if all those cars catch fire and it starts to burn.”

Folden said his day ended around 2 a.m. when he stopped his tactical mode and went into acting chief strategic mode. After a three-hour sleep, he was back at the command center.

RELATED: ‘I haven’t had a landline in … 17 years’; Neighbor, not emergency alert, told residents to evacuate in Marshall Fire