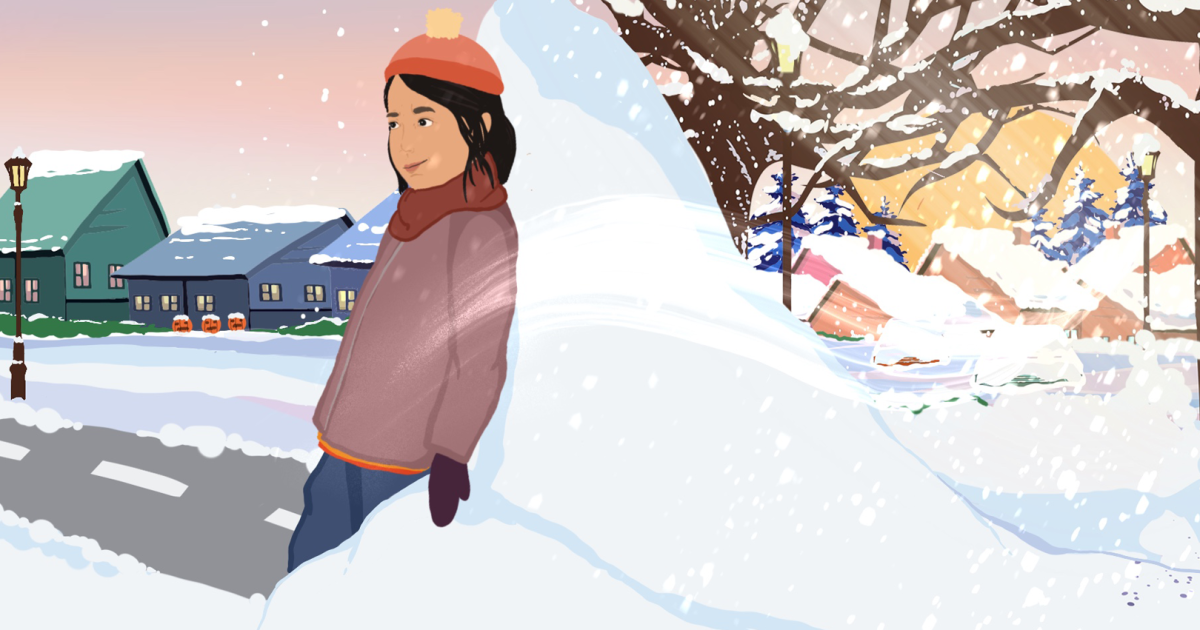 Each year, when the first blizzard comes to Minnesota, I bring you up. I speak of you to my three children as one of the most incredible natural experiences of my life.

This is what I tell them:

“It was Halloween night. My sister and I were out trick or treating. Our father stayed in the car, slowly following us through the evening into the dark of night. We were still new to America then, having only been in the country for four years. We were refugees and we were poor. We didn’t have money for the fancy superhero costumes or the traditional goblins and ghouls of our peers. We wore our regular clothes. On our faces, we had cheap plastic masks. My sister’s may have been a clown. I was a brown bear with a red bow to the side. As we ran from house to house, I fogged up my bear mask with my breath. In the slit of my bear eyes, I looked towards the street lamps to show the way. Beneath their orange glow, I saw the white snowflakes fly.

“The ticking of my heart became a clock I knew we were racing against as the flakes collected and made the walkways slippery beneath our sneakered feet. Still, guided by the spirit of Halloween, my sister and I ran from the house of one neighbour to the next. As the plastic bags in our hands grew heavier, the wind picked up and a bone-seeping chill swept through us and made us shiver. We fought the cold for as long as we could. When our hands grew numb, we ran towards our father and the warm car.

“That night, before climbing into bed and under the covers, I stood by the window looking outside. I saw that a thick blanket of snow had already covered the ground. The pumpkins on the porches of neighbours and friends were buried beneath the white. I prayed for more snow to fall.

“I fell asleep dreaming of a world covered in white softness, a world where sound was muted, where families could just play in the beauty of fresh fallen snow.

“The next morning, I got exactly what I wanted. I woke up. I looked outside. I screamed with excitement. The snow was halfway up our window. I woke my sister. We ran into the kitchen. Mom and Dad were at the front door and then the back door trying to get them open. They couldn’t. We were locked in by snow. The snow nearly as high as I was tall!

“My dad said, ‘If you can get ready quickly, if Mom and I can open one of these doors, you can go outside with me.’

“I put on layers of pants. I put on several shirts. I grabbed my jacket. I zipped it up. I grabbed my mittens, and I was ready. I was like a soccer player waiting to run into a game. My feet could not stay still.

“My parents could not open the front door, but Dad had an idea for the back door. He opened the kitchen window. He pushed out the screen. He climbed up and over the sill. From outside the house, he dug the door open with an old shovel.

“Dad told me to follow him. He made steps in the snow – big, giant steps – by raising his legs as high as they could go over the drifting white. We couldn’t see steps or ledges, bushes or cars. Everything was covered. The wind blew so there were mounds of snow taller than me. At points, I sank and sank right up to my chest in snow.

“The only sound I made was that of marvel: parted lips, laughter and awe spilling over, across the quiet expanse of everything. The whole of our block was empty. The trees were sagging beneath the weight of the snow. In the street, on the sidewalk, on the lawns of neighbours, it didn’t matter where we were stepping.

“All around us, the world had transformed. On Halloween night, I had gone to bed thinking that I would wake up to a world within the liquid confines of a snow globe. I had no way of envisioning what was before me: drifts of snow, climbing up the roofs of houses. There was more snow on the ground than I had ever seen in my life, and it was simply wondrous.”

Each time I tell the story, my children open their mouths in awe. Their eyes grow big. They put their little fisted hands right up beneath their chins and wish aloud, “I want it to be like that again, Mommy.”

Through my stories, they get to live with me in the wake of you, Blizzard of 1991.

Through my children’s eyes, they don’t know that within 24 hours, 28 inches of snow fell on these cities. They don’t know that no fewer than three men died of heart attacks shovelling their way out of the snow. They don’t know that across the cities, there were people who lost their fingers to the hungry jaws of the snow blades in the snowploughs, some had them reattached while others lost them forever. They don’t know that to clear the fallen snow off roads so that the 1,700 schools and businesses around town could operate, the Twin Cities spent some $700,000. They only know what I knew then.

Blizzard of 1991, you were beyond everything I knew could happen. You taught me that anything is possible in the hands of nature. When I’m an old woman, the memory of you will still make me feel young in the world.