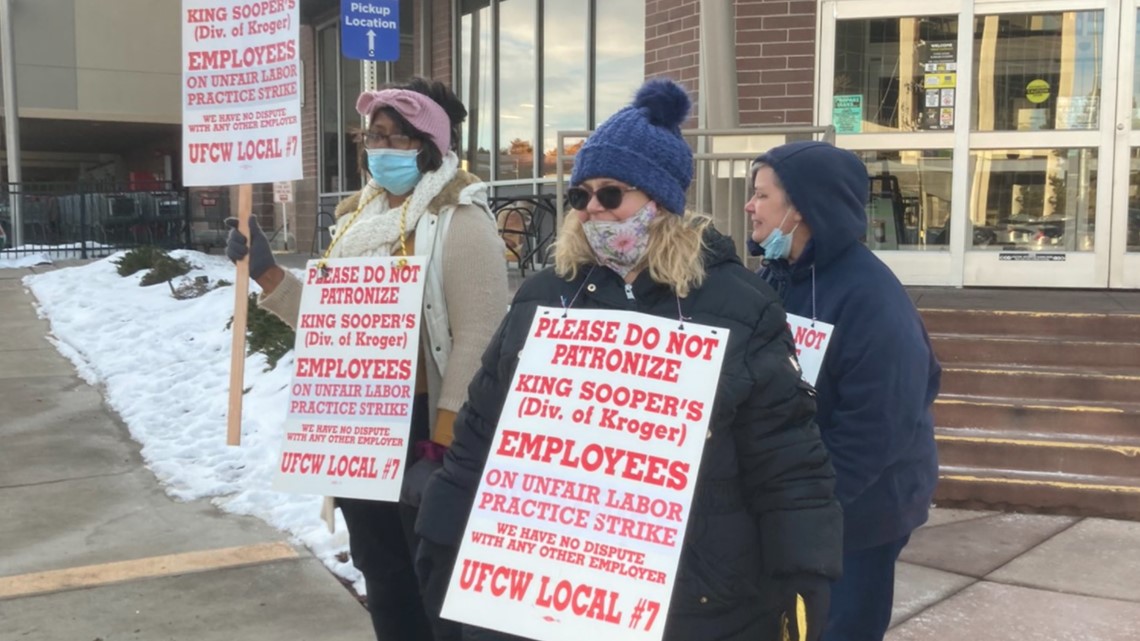 King Soopers’ newest offer, made on Tuesday, would increase the company’s investment in wages and bonuses to $170 million over the next three years, from the previous $148 million, according to a news release.

“At King Soopers, we want what is right for our associates, and that is more money in their paychecks while continuing to receive industry-leading health-care benefits,” Joe Kelley, president of King Soopers/City Market, said in a statement Tuesday.

United Food and Commercial Workers (UFCW) Local 7, which represents King Soopers employees in Colorado, said it declined the offer for its “unacceptable and insulting proposals” and that employees at 78 Colorado stores will strike at 5 a.m. Wednesday.

It’s not clear yet whether shoppers will see impacts like reduced store hours during the strike. Jack Buffington, a professor of supply chain management at the University of Denver, said shoppers should not panic buy, but should expect some disruptions.

“I think the consumer just needs to understand that there may be some inconveniences, there may be some items that they can’t get, but for the most part, the staples that they need, whether they get it at one grocery store or the other, they’ll get it,” he said. “But I would say be more predictive on your buying. Don’t want until the last minute if you can afford to do so.”

The planned strike includes about 8,700 workers in the Denver, Broomfield, Parker and Boulder areas. The contracts for employees at those stores expired Saturday, Cordova said.

More than 9 thousand King Soopers union members walked off the job this morning at more than 70 stores. The contract between the union and grocery store expired on the weekend. The union called the latest offer by King Soopers — “unacceptable and insulting proposals.” #9news pic.twitter.com/joLwR8cRli

“Clearly, King Soopers/City Market will not voluntarily meet the needs of our workers, despite our repeated pleas for the Company to listen to the voices of our members,” UFCW Local 7 president Kim Cordova said in a statement. “We strike because it has become clear this is the only way to get what is fair, just, and equitable for the grocery workers who have risked their lives every day just by showing up to work during the pandemic.”

Cordova said Monday that the store is proposing a starting wage of $16 an hour, which is 13 cents over Denver’s minimum wage.

“That 13 cents is not going to improve the lives of our grocery workers, who have done so much for these companies,” she said.

She said in addition to higher wages, workers want armed security and other safety improvements in stores, a faster path to full-time jobs, better health benefts and a secure pension plan.

King Soopers released the details of its latest offer Tuesday, which it said includes wage investments and signing bonuses of $170 million over the next three years:

The offer also includes an additional company investment into health care benefits that would result in “zero impact” to current premiums based on current projections, King Soopers said.

The union said it took issue with several proposals in the company’s offer, such as “restricting the worker’s ability to work overtime” and “allowing the company to lower wages during the term of agreement at its whim.”

The union is accusing the company of unfair labor practices, saying they have failed to provide necessary information and tried to negotiate directly with employees.

On Monday, the company said they had filed unfair labor practice charges against the union “for refusing to bargain in good faith,” saying the union had rejected mediation services. Cordova said the union is not interested in working with a federal mediator, saying “adding another presence is not going to be productive.”