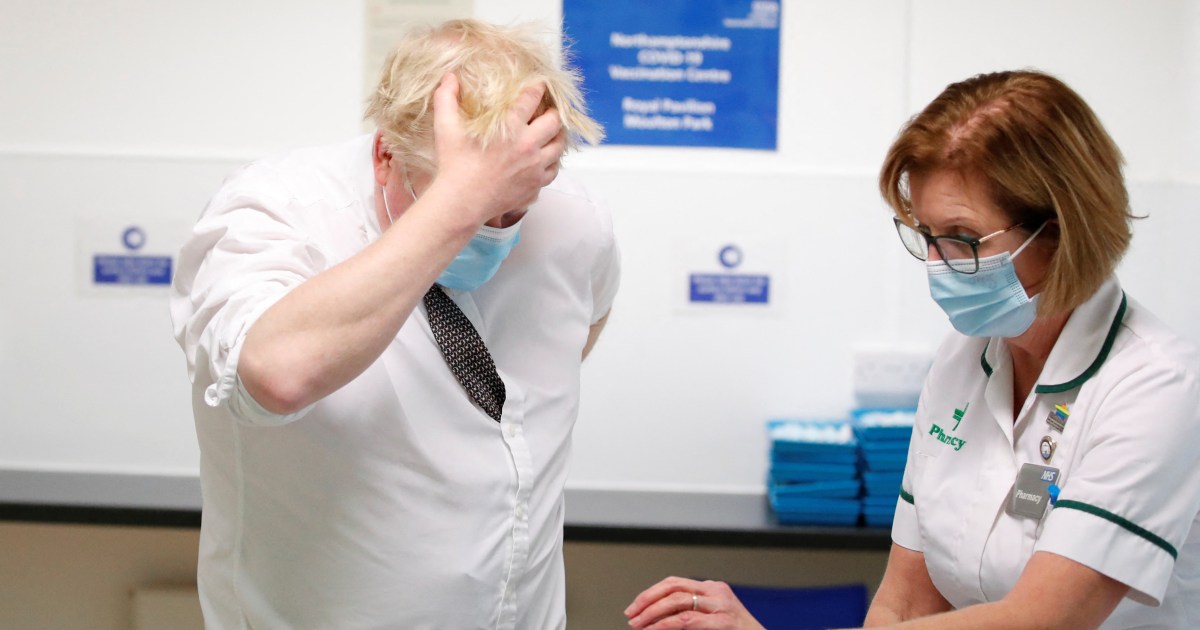 British Prime Minister Boris Johnson is under renewed pressure after an email was leaked inviting about 100 staff to bring drinks to a party during the country’s first lockdown.

The email was sent in May 2020, when UK residents were told they could only meet one other person from outside their household, outside, and at a two-metre distance.

Revelations about previous gatherings by government officials in contravention of their own rules have sparked widespread public anger. Johnson’s government has denied breaking COVID-19 protocols.

A summary of other developments:

Here are the latest updates on Tuesday:

Chicago teachers to end COVID-19 walkout that shut out 340,000 students

Chicago Public Schools, the third-largest US education district, will resume in-person classes on Wednesday after a union backed ending a walkout over COVID-19 fears in an agreement it said would boost safeguards.

The teachers agreed to reinstate virtual instruction and a push for more rigorous safety protocols, including wider testing, as the Omicron variant spread.

The walkout had affected 340,000 students in Chicago, the third most populous city in the US.

Bloomberg News is reporting that Hong Kong’s international airport is set to ban transit by passengers from designated high-risk countries from January 15 to February 14.

The report said that the ban will not apply to diplomats, government officials, athletes and staff participating in the Winter Olympics, which open on February 4 in Beijing.

Meanwhile, Hong Kong leader Carrie Lam announced on Tuesday that the city will start vaccinating children over 5 years old. She also announced the suspension of face-toface classes among kindergartens and primary schools until after the Lunar New Year, which will be on February 1 this year.

US weighs recommending N95 or KN95 masks against Omicron

According to a new Washington Post report, the US Centers for Disease Control and Prevention (CDC) is considering updating its mask guidance amid the new surge in cases due to the Omicron variant.

The report published late on Monday said that the CDC will likely advise people to opt for the highly protective N95 or KN95 masks worn by healthcare personnel.

Earlier on Monday, the US reported a record number of hospitalisations reaching 142,388 on Sunday – the highest since the pandemic began.

BREAKING—@CDCgov is now considering updating its mask guidance to recommend that people opt for #N95 or #KN95 masks worn by health-care personnel, if they can do so “consistently” (e.g. feel comfortable wearing all day)—c’mon, @CDCDirector—go all the way!https://t.co/9ZnusA4J5M

Duterte: We can’t wait for new law to restrain unvaccinated amid new surge

Amid the record-breaking number of cases in the last few days, Philippine President Rodrigo Duterte said that he cannot wait for a new law to be passed that would allow the unvaccinated Filipinos to be restrained.

“As I said, we have every right to restrain. We can’t wait for a law. Passing a law is very tedious in a democracy,” CNN Philippines quoted Duterte as saying during a recorded address to the nation that aired before midnight on Monday.

The Philippines hit a new daily record of more than 33,000 news cases on Monday, while also logging a new record positivity rate of 44 percent. On Tuesday, Duterte’s daughter, Sara Carpio, who is running for vice president, said she is against her father’s order to arrest or limit the movement of the unvaccinated.

Mexican president says he has COVID for second time

Mexican President Andres Manuel Lopez Obrador has announced that he has contracted COVID-19 for a second time.

“I inform you that I am infected with COVID-19 and although the symptoms are mild, I will remain in isolation and will only do office work and communicate virtually until I get through it,” he posted on Twitter.

Interior Minister Adan Augusto Lopez will replace Lopez Obrador at his usual morning press conference and other public events while he recovers.

UK Prime Minister Boris Johnson is under renewed pressure following revelations of a Downing Street party during the United Kingdom’s first lockdown in May 2020.

In an email leaked to ITV News, an aide to Prime Minister Boris Johnson invited just more than 100 people working in 10 Downing Street to “socially distanced drinks” in the garden.

“Please join us at 6pm and bring our own booze!” it concluded.

About 30 to 40 people accepted the invitation.

At the time, people in the UK were allowed to meet only one person from outside their household in an outdoor public space provided they remained two metres apart.

Merck: Molnupiravir should be effective against Omicron

Merck’s COVID-19 oral pill molnupiravir can work against Omicron and any other variant, the company says.

“We’re very confident that it will affect Omicron … This mechanism in molecule (will) work for Omicron, and I would imagine against any variant that comes up,” Dean Li, president of Merck Research Laboratories, said at JP Morgan’s annual healthcare conference.

Data on molnupiravir’s effect against Omicron is not yet available, but the pill was shown to be 30 percent effective at reducing hospital admissions and deaths, based on data from 1,433 patients, in data released in November.

The pill has secured regulatory authorisation from the US, UK, Japan and India.

Read all the updates from Monday here.