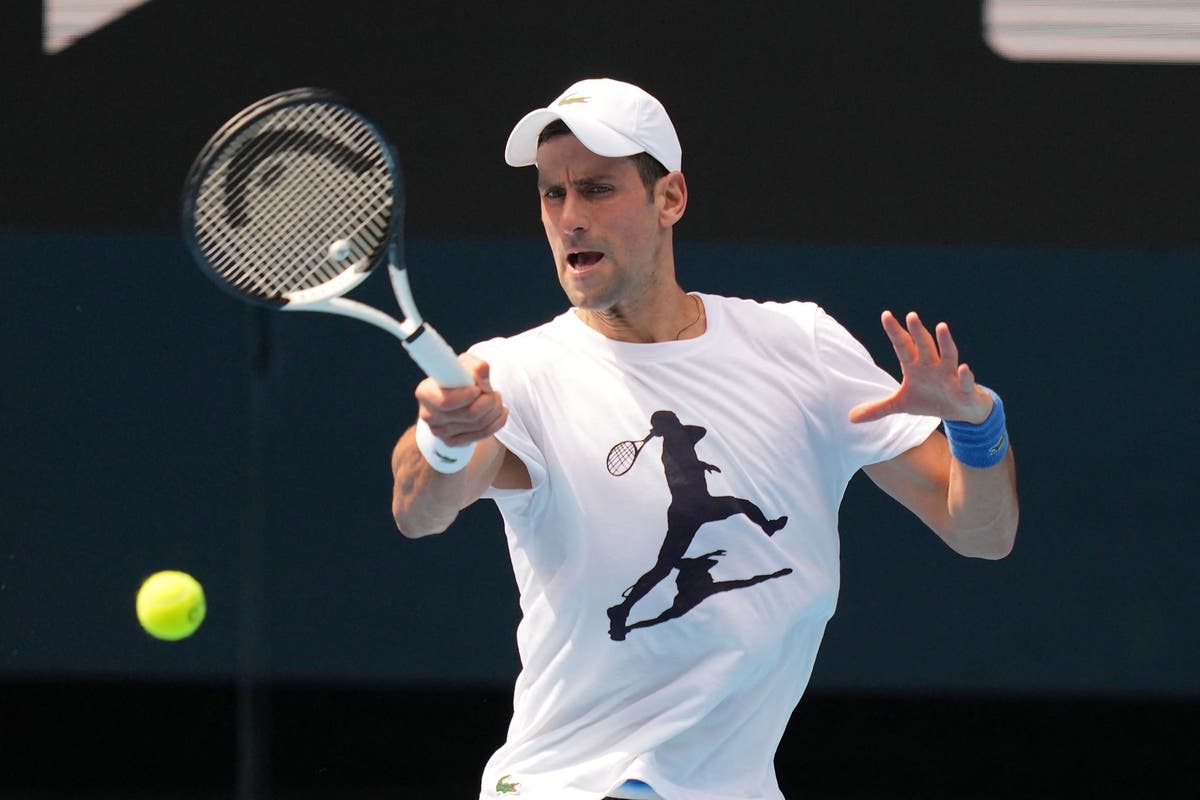 Novak Djokovic is free to enter Australia after winning his fight with the nation’s government over his visa – for now, at least. Minister for Immigration Alex Hawke is still considering the possibility of “a personal power of cancellation”, a move which could yet drag on for several days as the Serbian star looks to prepare to compete for the Australian Open.

Both of his parents have been outspoken during the course of the appeal, with his father claiming victory for human rights and free speech in “a young man from a small, poor country” defeating “big, powerful people” in the courts. Djokovic’s mother, meanwhile, compared his treatment to being “subjected to torture, to harassment”.

However, none of his family opted to answer questions surrounding the tennis star’s positive Covid result from December, ending a press conference when the matter arose on Monday. Court documents show Djokovic testing positive on 16 December, but the following day he was apparently photographed in public settings without a mask and with children in attendance.Follow all the latest news and reaction from Djokovic’s hearing below.

Wimbledon quarter-finalist Marton Fucsovics has responded to Novak Djokovic’s vaccination exemption by saying he does not think the Serbian had the right to play in the Australian Open.

Speaking to the Hungarian outlet M4Sport, Marton Fucsovics said: “People’s health is paramount, and there are rules that were outlined months ago, namely that everyone should vaccinate themselves – and Djokovic didn’t.

“From this point of view, I don’t think he would have the right to be here.”

The Hungarian world number 38, who lost to Djokovic in last year’s Wimbledon quarter-finals and in the Paris Masters in November, also said he was not alone in thinking it unfair that Djokovic could play in the Gram Slam despite not being vaccinated.

Bernard Tomic believes he will get Covid in the next few days and has blamed the testing at the Australian Open.

Tomic, who lost his qualifier, spoke to an umpire in the middle of a match betting him he would test positive. “I’m sure in the next two days I’ll test positive, I’m telling you,” Tomic said. “I’ll buy you dinner if I don’t test positive in three days. Otherwise, you buy me dinner.

“I cannot believe nobody’s getting tested. They’re allowing players to come on the court with rapid tests in their room. Come on. No official PCR testing.”

Renata Voracova also had her visa cancelled after entering Australia as she came to the country on a similar exemption to Djokovic.

She had Covid recently and so was initially allowed into the country. However, her visa was revoked and she was deported.

She has said she hopes Djokovic doesn’t have the same fate, saying: “Hopefully he can play. Because that is what we went there for: to play tennis and not be part of any inside games.”

Former Australian Prime Minister Kevin Rudd has taken aim at current leader Scott Morrison for the way the Djokovic situation has been handled.

The world no. 1 was initially given a medical exemption to enter the country as he had tested positive on 16 December. However, upon arrival his visa was cancelled and he was held at a hotel until his appeal. Djokovic won the appeal to stay in Australia but could be deported in coming days.

Rudd tweeted: “Does Morrison have any idea what his incompetence on #Djokovic has done to Brand Australia in the eyes of the world? Intended as a clever political distraction from his outright negligence on hospitals, boosters, kids’ vaccines and rapid tests. Instead, it’s blown up in his face.”

Djokovic has number one seed for Australian Open

After winning his appeal on Monday, Djokovic is set to compete at the Australian Open and he has been handed the number one seed for the men’s competition.

The world no. 1 is still waiting on immigration minister Alex Hawke to decide if he will re-cancel his visa but for now the star is set to take part.

While Djokovic holds the top seed for the men, Ashleigh Barty has it for the women after winning the Adelaide International earlier this month.

Comedian David Baddiel has tweeted about Djokovic and the situation that has unfolded over the past few days. He has suggested the world no. 1’s treatment at the Melbourne airport wasn’t a “terrible insult” to Serbs but just the Border Force treating him as they would other unvaccinated travellers.

Djokovic’s father, Srdan, had suggested at their press conference on Monday that his son was treated harshly because he comes from a “small and impoverished country”.

Srdan said: “Obviously the fact he comes from small and impoverished country was not something big, powerful people liked. They thought they had God-given powers that this world is their world, and it is impossible that a young man from a small, poor country can be the best in their sport.”

But Baddiel believes he wasn’t harshly treated, tweeting: “Is it possible that the Australian Border Force’s decision not to let Djokovic in immediately was not, in fact, a terrible insult to Serbia and Serbs everywhere, but just them applying the same regulations that they would to any other unvaccinated traveller?”

Djokovic may have won his appeal to stay in Australia on Monday but immigration minister Alex Hawke still has the power to deport the star if he wishes.

It’s believed the government minister will make his decision on Wednesday ahead of the Australian Open, which starts on 17 January.

But why can he still be deported? Here’s a piece that explains everything:

The Serbian claimed that he had not travelled for 14 days before entering Australia.

But this claim appears to contradict several social media posts.

Djokovic was seen in Belgrade on Christmas Day and flew from Spain to Australia, via Dubai, on 4 January.

Djokovic’s fate, despite winning a court appeal on Monday, now lies with Australia’s immigration minister Alex Hawke, meaning he could yet be deported.

It has now been confirmed that Djokovic, in a traveller declaration, filed 1 January, declared “no” when asked: “Have you travelled or will you travel in the 14 days prior to your flight to Australia?”

The declaration comes with a warning that a “serious offence” is caused by providing false or misleading information and may be punishable by civil penalties.

Bernard Tomic was caught on camera in an extraordinary exchange with an umpire at the Australian Open qualifying event.

Tomic lost his qualifier but after the first set he bet the official he would test positive for Covid.

He said: “I’m sure in the next two days I’ll test positive, I’m telling you. I’ll buy you dinner if I don’t test positive in three days. Otherwise, you buy me dinner.

“I cannot believe nobody’s getting tested. They’re allowing players to come on the court with rapid tests in their room. Come on. No official PCR testing.”

He has given an update on his health and you can read the full story:

Nigel Farage has been in Belgrade with Djokovic’s family during the tennis star’s struggles in Australia.

The politician shared a video of the family home and said he had been “welcomed” in and British player Andy Murray replied.

He said: “Please record the awkward moment when you tell them you’ve spent most of your career campaigning to have people from Eastern Europe deported.”

Read how Farage replied and the full story: