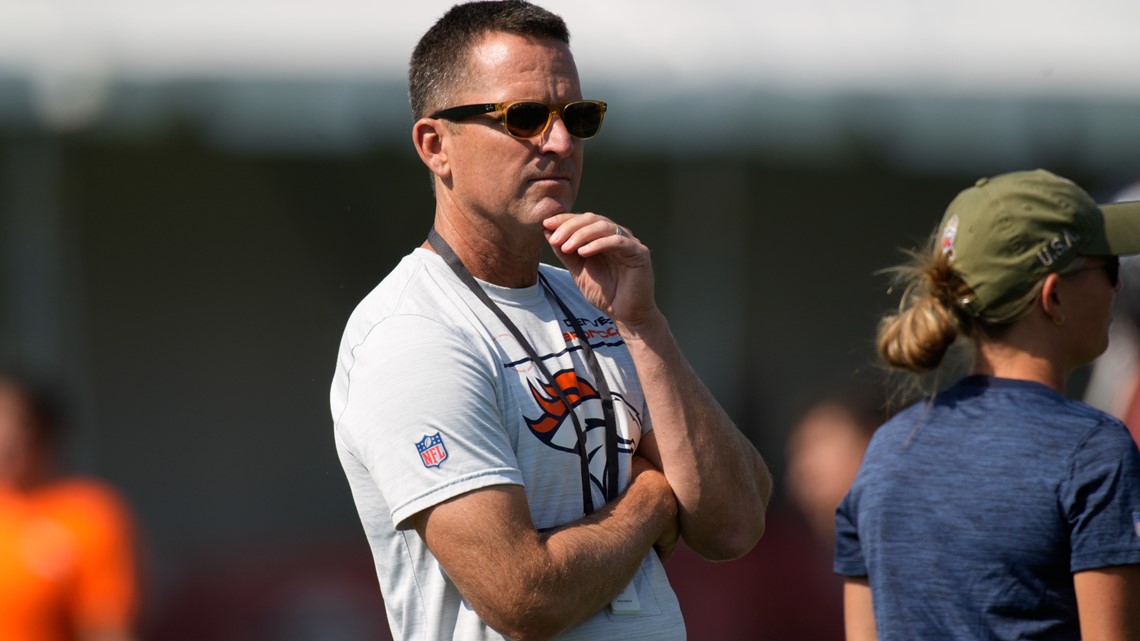 Paton entered the process expecting to interview seven to 9 candidates before making his decision on the Broncos’ next head coach, which will be the fifth in 9 seasons for the team. Understand, requesting permission does not mean the interview will occur.

While the priority is fixing the offense that has been underwhelming the past seven seasons, Paton said in his press conference Sunday that would not preclude a defensive-rooted coach from consideration for the head job. His eight known candidates break down to four offensive coordinators and eight defensive coaches. Quinn is the only candidate with previous NFL head coaching experience while his coordinator teammate Moore is the youngest at 33. Mayo and Bieniemy check the NFL’s Rooney rule mandate that teams with head coaching vacancies interview at least two minority candidates.

“The offense—we need to upgrade the offense,” Paton said. “We know that. Whoever we talk to, they’re going to have to have a plan for our offense. If they’re a defensive-minded coach, they’re going to have talk about their plan—they’re offensive coordinator and his coaching staff and what his vision is with our personnel. All that goes into it. Offense is obviously a priority, but we don’t want to take a step back on defense. We also need to elevate special teams. We need someone to take over the whole operation and not just be focused on one side of the ball, even though we really need to upgrade on that side of the ball.”

The Broncos can interview Hackett and Glenn this week because his Packers have a first-round playoff bye as the NFC’s No. 1 seed and the Lions, well, Lions coaches are always available this time of year, not that the Broncos can talk.

The other six candidates are all competing in the postseason’s wild-card round this weekend and can’t be interviewed until next week (starting Tuesday, Jan. 18 and ending Saturday, Jan. 22).

A first-round linebacker selection for the Patriots in 2008, Mayo played eight years for the Patriots, where he became a Super Bowl champion and two-time Pro Bowler. He was hired by Bill Belichick as his inside linebackers’ coach just three years ago. He may be a little inexperienced to get a head job this cycle, but former Patriot Mike Vrabel had just four years of NFL coaching experience and he immediately proved to be a top 10 head coach with the No. 1-seed Titans.

Mayo is considered to have that “It” leadership quality who is worth interviewing.

Considered by many to be the leading candidate for two primary reasons: One, he has previous NFL head coaching experience as he led the Atlanta Falcons’ staff from 2015 until five games into the 2020 season. His 2016 Falcons reached the Super Bowl and had a 28-3, third-quarter lead against the Patriots before collapsing and losing in overtime. Two, Quinn and Paton worked together for the Miami Dolphins in 2005-06.

A third reason: Quinn is a high-energy, enthusiastic coach, a personality contrast to Fangio.

He was also defensive coordinator for that great Legion of Boom Seahawks defense that destroyed the record-setting Broncos offense in Super Bowl 48. Had a rough day against Pat Shurmur’s offense as the Broncos jumped to a 30-point lead in a November 7 game in Dallas.

He might be the Sean McVay candidate in this hiring cycles – the young but creative offensive mind who calls the plays for the Cowboys’ No. 1-ranked offense in yards (407.0 per game) and points (31.2). Can you imagine a Broncos’ offense averaging 407 yards and 31 points a game? Moore was a cerebral, extremely accurate, soft-tossing lefty quarterback at Boise State where his four-year record of 50-3 makes him the winningest quarterback in NCAA history. (Broncos quarterback Brett Rypien came close to many Moore’s records at Boise State).

After six years as an NFL backup quarterback, Moore became the Cowboys’ quarterbacks coach under Jason Garrett in 2018, then spent the past three seasons as their offensive coordinator. Had a rough day against Fangio’s defense in November when the Broncos jumped to a 30-0 lead before winning 30-16.

An oft-interviewed head coaching candidate, Bieniemy has never got the head coaching gig in part because head coach Andy Reid calls the plays for the juggernaut Chiefs’ offense. But Reid has occasionally given Bieniemy the play-calling duties, as he apparently did in the Chiefs’ 28-24 win Saturday against the Broncos.

Bieniemy was the star running back for the great University of Colorado teams during the Bill McCartney era from 1988-90, before becoming a backup tailback for nine years in the NFL. His coaching resume includes two stints at CU (running backs coach, 2001-02) and offensive coordinator (2011-12), plus five seasons as the Vikings’ running backs coach (2006-2010) that overlapped with Paton as the team’s assistant GM.

Bieniemy will have to address some off-field incidents at CU from his younger days and his coaching stint at the school 10 years ago was stormy. But Bieniemy has come a long way in his nine seasons under Reid. If Andy Reid vouches for a guy, that’s a solid reference.

A play-calling offensive coordinator for the Bills (2013-14) and Jaguars (2016-18), he now helps head coach Matt LaFleur game plan the offense for Aaron Rodgers. Even though LaFleur calls the plays, Hackett is drawing notice as a head coach candidate in part because of the possibility the Packers won’t have the cap room to keep Rodgers past this season. The speculation is Hackett could help lure Rodgers to the team that hires him.

If Hackett can promise in his interview he can deliver Rodgers, call off the search!

On his own merits, Hackett helped guide a passing-challenged Blake Bortles to the 2017-season AFC Championship with Jacksonville. The Broncos figure to interview Hackett later this week. He will also interview for the Jaguars’ head coaching opening.

There is interviewing a McVay-type. And there is checking out McVay’s top assistant. The success of Bengals’ coaching boss Zac Taylor, who was considered too young for the top job three years ago when he catapulted from McVay’s QB coach, has team’s re-thinking the young and inexperienced as head coach material.

O’Connell was a third-round backup rookie quarterback of the Patriots in 2008. He bounced around for five years before breaking into coaching as the Browns’ QB coach in 2015.

He also worked on Jay Gruden’s coaching staff in Washington before joining McVay in 2020.

Gannon was an assistant defenesive backs coach with Minnesota from 2014-17, when Paton was the team’s assistant general manager. A first-year coordinator but a well-spoken, intelligence man who has a presence. Inherited a defense that finished 19th in total defense last year and improved the Eagles’ D to No. 10 this year.  A bit of a shooting star among young defensive coaches.

The biggest surprise. Glenn was a fine NFL cornerback for 15 years, earning three Pro Bowls. He had seven years coaching experiences in the league as defensive backs coach. He got his first chance as defensive coordinator this year at the Lions finished 29th in yards allowed and 31st in scoring defense.