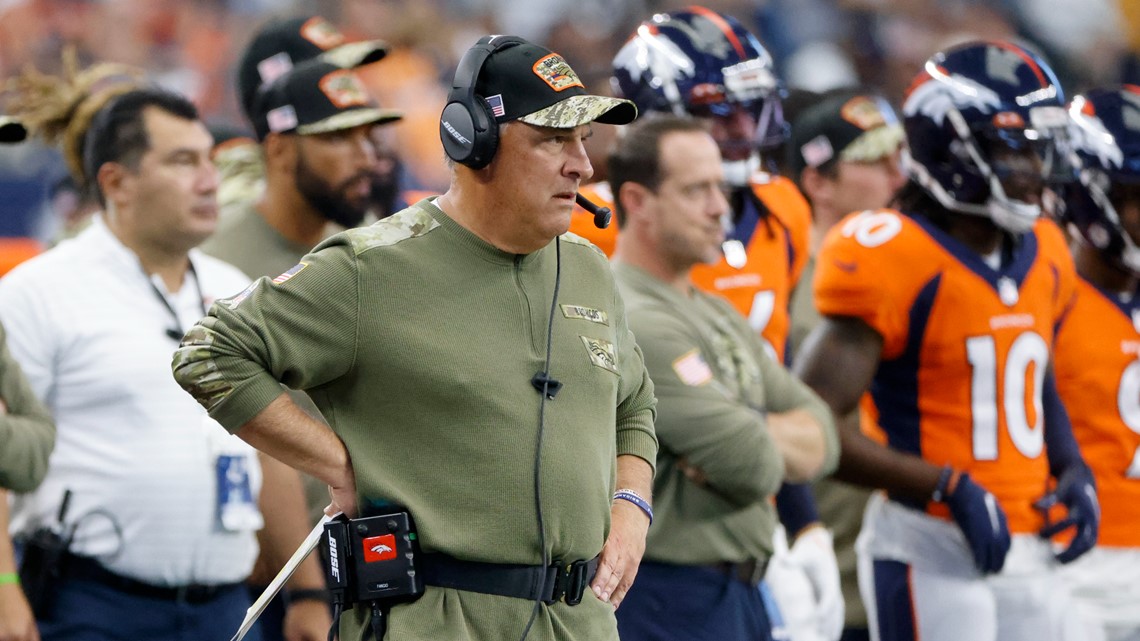 Denver will be looking for its fifth head coach in nine seasons. GM George Paton will head the search committee.

ENGLEWOOD, Colo. — When in doubt, fire the head coach.

Vic Fangio is the latest but not the only Broncos head coach who has not finished out his contract in the past seven years. John Fox resigned out of conflict with general manager John Elway following the 2014 season. Gary Kubiak resigned for medical reasons after the 2016 season. Vance Joseph was fired following an 11-21 record after the 2018 season. And now Fangio has been dismissed following three more losing records of 7-9, 5-11 and 7-10.

The Broncos are about to embark on a search for their fifth head coach in nine seasons. Second-year general manager George Paton will head that search, which figures to take two weeks from today’s gathering of five to seven candidates – at least two must be minority candidates per the newly expanded Rooney Rule – to reaching a contract agreement with the chosen one.

9NEWS has compiled a list of – what else? – 9 head coach candidates (in no particular order, but maybe) whom the Broncos may consider (plus two bonus candidates):

The only candidate with Super Bowl-winning head coaching experience. Pederson was also Andy Reid’s offensive coordinator with the Chiefs from 2013-15. That got him the Eagles head job. He developed first-round rookie Carson Wentz from a North Dakota State project to an MVP candidate before he tore up his knee late in his second season of 2017. Pederson then guided journeyman Nick Foles through the postseason to a high-scoring Super Bowl victory against Tom Brady and the Patriots. A fallout with Eagles’ management after the 2020 season will have to be vetted.

OK, so Rodgers can carry any coach to the conference championship and Matt LaFleur is not only the Packers’ head coach, he’s their offensive play caller. Still, Hackett is a bright, creative offensive mind who would be part of a possible Rodgers play. If the Broncos want to lure Rodgers – and they have the cap room to satisfy his financial interests and enough Day 2 draft picks and young players to possibly satisfy the Packers – Hackett as head coach would be a nice recruiting tool.

He has a connection with Paton as they worked together with the Miami Dolphins for two seasons in 2005-06. Quinn and Pederson are the two hot coaching candidates in this hiring cycle with previous Super Bowl head coaching experience. Quinn’s Falcons should have won it following the 2016 season, but blew a 28-3 lead and lost to Brady’s Patriots in overtime. The Falcons gradually sank from there. After Joseph and Fangio, would the Broncos go with a third consecutive defensive coordinator for head coach? Paton might. Remember, he only has one losing season of history with the Broncos.

Only has three years of coaching experience but Mike Vrabel and Brandon Staley only had four years each as NFL assistants before they got their head jobs. Mayo played and coached in the Belichick system which is finally starting to produce successful head coaches. See Vrabel and the Dolphins’ Brian Flores. Mayo is worth an interview.

A possible sleeper. He was groomed by the Broncos as an entry-level assistant under Josh McDaniels in 2010 and stayed on through the Peyton Manning years in 2015. He then became quarterbacks coach for the Lions and Raiders before becoming the Bengals’ offensive coordinator in 2019. Have you seen the rapid rise of quarterback Joe Burrow? His dad, Bill Callahan, is considered one of the best offensive line coaches in the NFL and is the former head coach of the University of Nebraska and the
Raiders. Brian Callahan is 37 and could be the closest thing to a Sean McVay/Zac Taylor-type candidate in this year’s class.

The Broncos, of all teams, have to interview Bieniemy, who has strong roots to the University of Colorado. Bieniemy has been the most interviewed, and most spurned, NFL head coaching candidate of the previous two hiring cycles. Bieniemy’s biggest downfall is that Reid calls the plays for the Chiefs. Then again, it was the same strike against Pederson and Matt Nagy and they got head coaching jobs.

Bieniemy as running backs coach and Paton as assistant GM overlapped with the Vikings from 2007-10. He again will interview with multiple teams this offseason for the head job.

Most notably, he developed Josh Allen, who was about as raw as it gets coming out of Wyoming, into a terrific NFL quarterback. Daboll also had two different stints, covering 11 seasons, as an assistant under Belichick. Doesn’t necessarily look the part, but Daboll is an excellent and creative offensive coach.

He’s the defending Super Bowl-winning offensive coordinator who helped Brady make an immediate successful transition to a new team after 20 years in New England. And the Bucs have a chance to repeat. They are no. 1 in total offense and No. 2 in scoring this season. Still, Leftwich will have to overcome the notion the success was largely Brady, not him. Which won’t be easy. Still, Leftwich figures to be a leading candidate for the vacant job in Jacksonville, where he was once their first-round draft pick and franchise quarterback.

Despite below-average arm strength, he is the winningest quarterback in NCAA history as he went 50-3 in four seasons at Boise State, where he set all kinds of passing records. That would suggest a beautiful offensive mind. He was the Cowboys’ offensive coordinator under Jason Garrett and Mike McCarthy. Dallas is No. 1 in scoring this year and No. 2 in total offense with a very good, but maybe not a top 5 quarterback in Dak Prescott. Moore is only 33, so he may be closer to the Sean McVay candidate than Callahan. Moore, though, might have to explain how Fangio’s Broncos got up 30-0 against his Cowboys in a Nov. 7 game in Dallas.

He had more success as NFL head coach than he did at Michigan. And maybe the Broncos can install a Colin Kaepernick package. It has been reported Harbaugh would listen to teams with head coaching vacancies.

How does a guy get fired after going 9-7 in back-to-back seasons with the Lions? Caldwell is 62-50 in seven seasons as head coach, including a 14-2 mark with Peyton Manning and the Colts in 2009, a season that ended with a Super Bowl loss to the Saints.