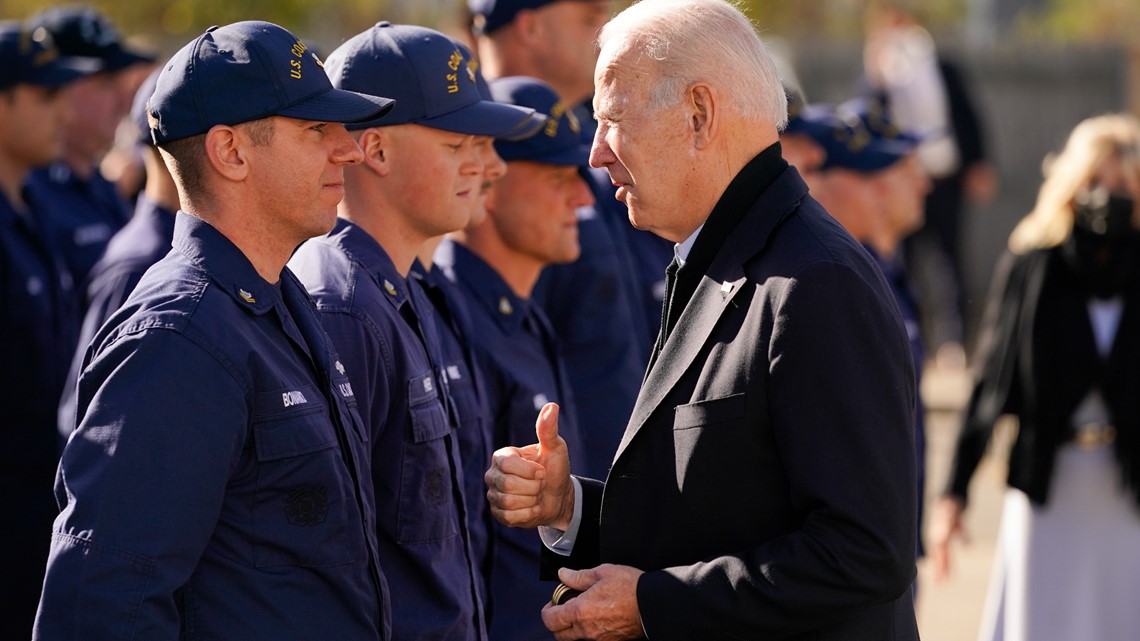 The president and first lady Jill Biden released their greeting Thursday in a video recorded before their trip to Nantucket, Massachusetts, for the holiday weekend.

NANTUCKET, Mass. — President Joe Biden on Thursday wished Americans a happy and closer-to-normal Thanksgiving, the second celebrated in the shadow of the coronavirus pandemic, in remarks welcoming the resumption of holiday traditions in many homes.

“As we give thanks for what we have, we also keep in our hearts those who have been lost and those who have lost so much,” the president said in a video greeting recorded with first lady Jill Biden at the White House before their trip to Nantucket, Massachusetts, for the holiday weekend.

On Nantucket, the Bidens visited the Coast Guard station at Brant Point to meet virtually with U.S. servicemembers from around the world and chat with personnel at the station. “I’m thankful for these guys,” the president said when asked what he was thankful for, referring to the Coast Guard members standing ramrod straight in front of him on the grounds.

“As commander in chief, I’m especially grateful to our servicemembers and their families for their sacrifices to our nation,” he said in the video.

The press was not allowed inside to witness his remarks to servicemembers abroad. Well-wishers waved and cheered as the Bidens traveled by motorcade to the Coast Guard station.

RELATED: Families struggle with how to hold 2nd pandemic Thanksgiving

RELATED: ‘Prepared for the holidays’: Travelers emerge in time for Thanksgiving

From Nantucket, the Bidens also called in to the Macy’s Thanksgiving Day Parade, briefly bantering with NBC broadcaster Al Roker. Shut out a year ago, spectators again lined the route as some 8,000 participants joined the parade and marching bands from around the country played. Parade employees and volunteers had to be vaccinated against COVID-19 and wear masks.

RELATED: Macy’s Thanksgiving parade returns, with all the trimmings