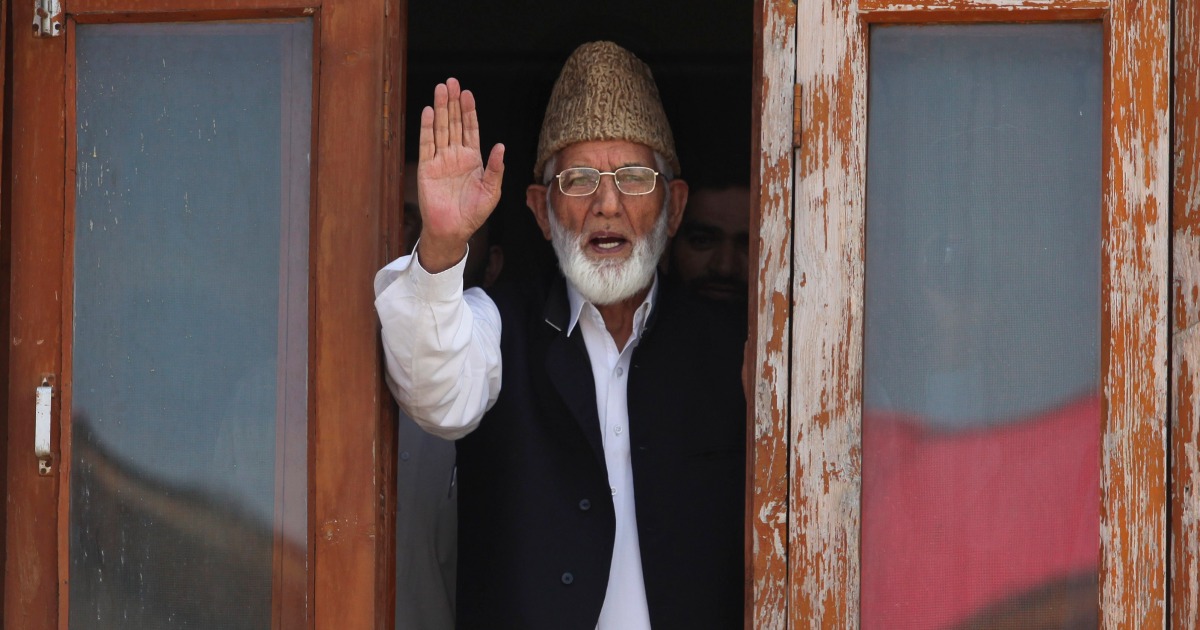 Anger mounts in disputed region over police footage of his funeral, which his family say they were barred from attending.

Indian security forces are maintaining an armed guard around the grave of an iconic Kashmir separatist leader, amid mounting public anger over police footage of his funeral, which his family say they were barred from attending.

Indian authorities have imposed a security clampdown in the contested Himalayan region since the death of Syed Ali Shah Geelani, a leading separatist voice over the past 50 years, last Wednesday at the age of 92.

The next day, his son Naseem Geelani told Al Jazeera the armed police “snatched his (Geelani’s) body and forcibly buried him” in the middle of the night and “did not allow any of us to take part in final prayers”.

Police have denied the accusations but faced fresh outrage after posting videos on Twitter on Monday, showing Geelani’s body being washed, wrapped in a shroud and buried.

Fearing protests, his grave in Indian-administered Kashmir’s main city of Srinagar is under armed guard and visitors are not allowed.

Mufti Nasir ul Islam, the most senior Islamic jurist in India’s only Muslim-majority region, which is also claimed by Pakistan, condemned the police action as “un-Islamic”.

He told the AFP news agency that the body of a deceased person must be respected even if it is a “criminal sentenced to death”.

“I think his family is hurt and the people of Kashmir are hurt. Police should apologise for doing this,” the jurist said.

Visuals from the funeral prayers (Janaza) of SAS Geelani. pic.twitter.com/AVDz7R7JXc

Police issued the clips after a video widely shared on social media showed Geelani’s body, wrapped in a Pakistan flag, being taken away by the armed police as his family scuffled with police officers.

Security forces then issued a statement, saying Geelani’s sons initially agreed to a quick funeral but changed their minds “probably under the pressure from Pakistan” and “started resorting to anti-national activities”.

It added that “after persuasion”, Geelani’s relatives brought the body to the graveyard “and performed last rites with due respect.” It did not name which relatives were present.

Visuals from the graveyard during burial of SAS Geelani. pic.twitter.com/ndvcHx5xtG

Indian authorities cut mobile-phone coverage and the internet across Kashmir following Geelani’s death, services that have only begun coming back online since Sunday.

Geelani was once head of the Hurriyat Conference, an influential coalition of Kashmir separatist groups that has led political resistance against Indian rule since the early 1990s.

The Conference announced on Tuesday that Masarat Alam Bhat, a resistance leader who has been in an Indian jail since 2010, had been named as the new head of the coalition.

Masarat Alam Appointed as Chairman of All Parties Hurriyat Conference

Shabir Ahmad Shah, another jailed leader, once hailed as the “Nelson Mandela of Kashmir”, has been made the new vice chairman of the alliance.

Shah has spent a total of 33 years in Indian prisons intermittently since the 1980s.

The Indian government has jailed most top Hurriyat leaders.

Media reports suggest the group might be banned, just as other political and religious organisations that have been outlawed since 2019, when New Delhi scrapped the region’s special status and turned it into a federal territory.

Like his predecessor Geelani, 51-year-old Bhat is considered an uncompromising proponent of the Kashmir resistance and has been under detention for some 25 years.