South Africa’s economy expanded 1.2 percent in the three months ending June, but it will likely contract in the third quarter after deadly riots swept parts of the country.

South Africa’s recovery from a coronavirus-induced contraction quickened in the second quarter as restrictions to contain the pandemic were eased.

Gross domestic product expanded 1.2% in the three months through June from a revised 1% in the previous quarter, Statistics South Africa said Tuesday in the capital, Pretoria. The median estimate of four economists in a Bloomberg survey was for growth of 0.9%. The agency no longer reports an annualized growth rate and now uses 2015 as the base year for the data. 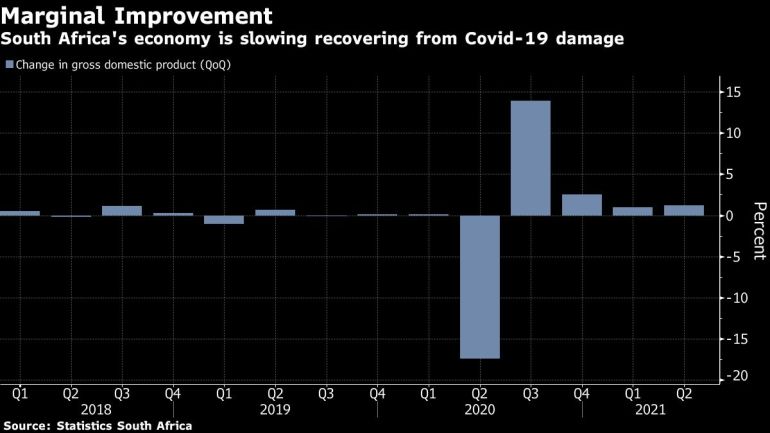 The economy grew 19.3% from a year earlier – the first year-on-year increase in five quarters. That’s up from a low base in the second quarter of 2020, when a strict Covid-19 lockdown shuttered most activity, and compares with the 17.8% median estimate of 14 economists in a separate Bloomberg survey. Output remains below pre-pandemic levels.

While the quarterly outcome supports forecasts that predict Africa’s most industrialized economy will recover from its biggest contraction in at least 27 years, it’s likely to be revised after the statistics agency was forced to use an estimated value for missing mining data. That’s because the Department of Mineral Resources and Energy failed to provide it with timely information needed to calculate mining production and sales figures for June.

The economy is likely to contract in the third quarter after deadly riots, looting and arson erupted in July and weighed on activity in the eastern KwaZulu-Natal province and the commercial hub of Gauteng – the two biggest provinces by contribution to GDP. A cyber attack at the state-owned ports and rail operator also hobbled trade at key container terminals and led the company to declare its second force majeure in a month.

“The economy has overall shown itself better at recovering in the past year than initially expected – either at the start of Covid-19 or into this data – but there is still significant uncertainty over the impact the unrest will have in the short term and longer term into lower investments,” said Peter Attard Montalto, head of capital markets research at Intellidex.

A fourth wave of Covid-19 infections that’s due in early December and could prompt stricter lockdown measures amid vaccine hesitancy, electricity-supply constraints and the slow pace of structural reforms could further weigh on output for the second half of the year. It could also hinder job creation in a nation where more than a third of the workforce is unemployed.

South Africa’s economy is stuck in its longest downward cycle since World War II and hasn’t grown by more than 3% annually since 2012. That’s as a policy paralysis and weak business sentiment weigh on fixed investment spending, with private-sector companies wary to commit large sums of money to domestic projects. Gross fixed capital formation rose 0.9% from the first quarter.

Growth in household spending, which now accounts for about 63% of GDP, increased 0.5% in the second quarter. Data released Monday showed consumer confidence remains depressed and that temporary welfare measures, retrenchment and life insurance payouts are among the factors propping up household finances.

Poor sentiment among consumers and data that shows the economy is not yet “firing more consistently across all sectors” means the central bank is unlikely to raise borrowings this year, Montalto said. The bank’s monetary policy committee is due to announce its next interest-rate decision Sept. 23.

(Updates with comment by analyst in fourth paragraph after chart)
-With assistance from Simbarashe Gumbo and Gordon Bell.