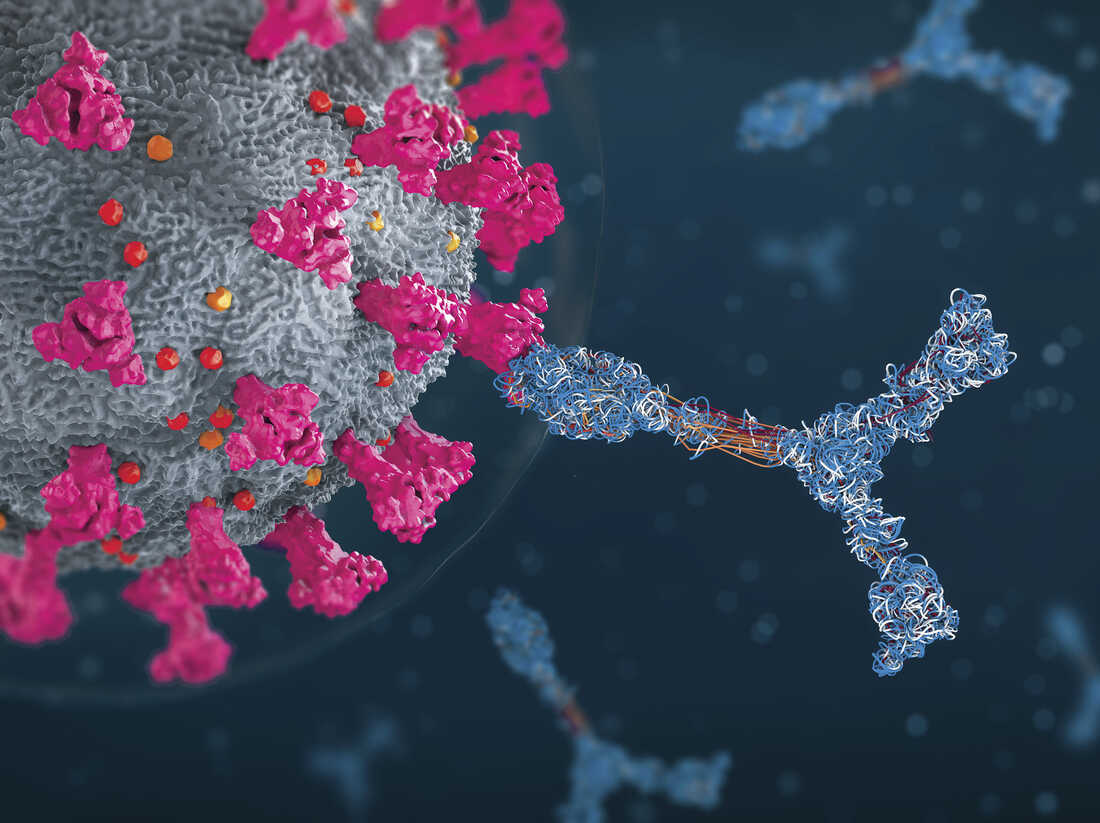 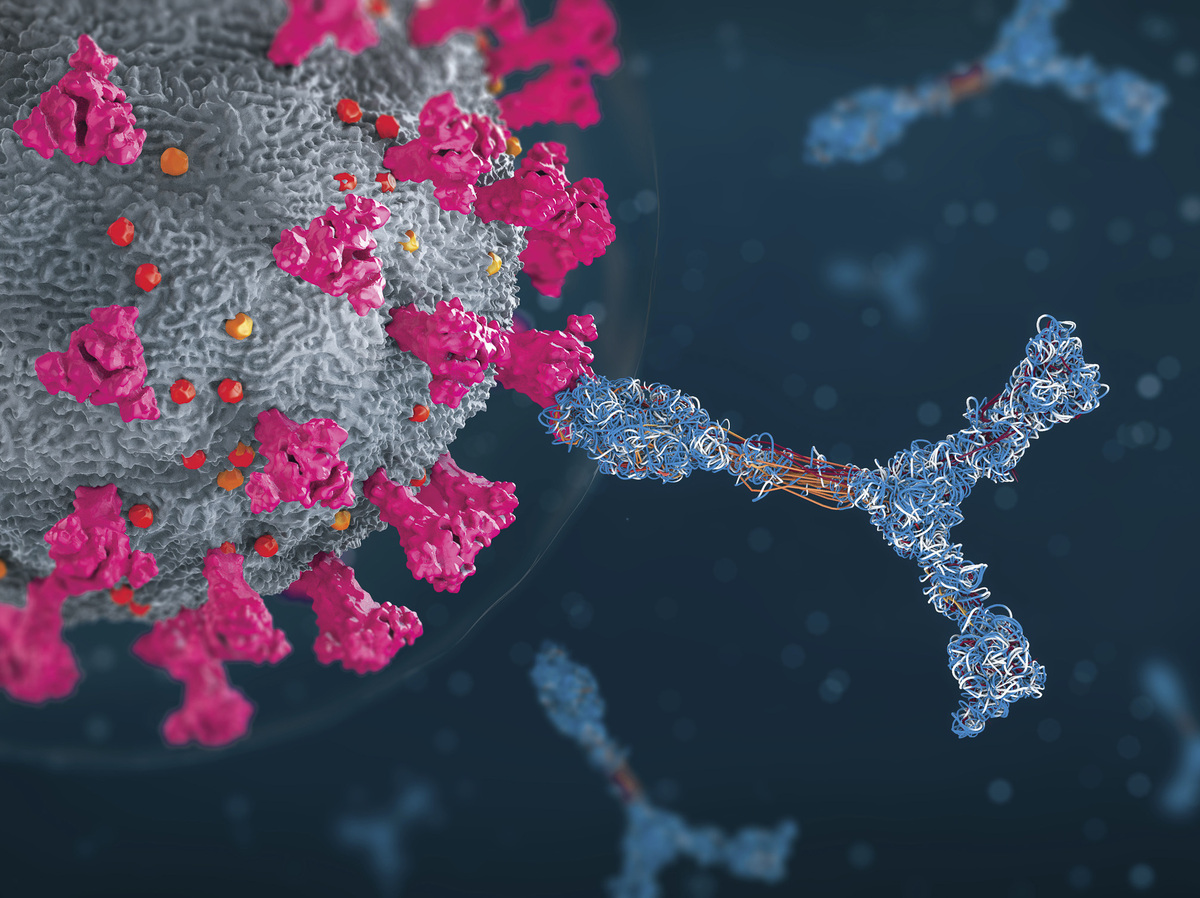 An illustration of antibodies attacking a coronavirus particle.

Some scientists have called it “superhuman immunity” or “bulletproof.” But immunologist Shane Crotty prefers “hybrid immunity.”

“Overall, hybrid immunity to SARS-CoV-2 appears to be impressively potent,” Crotty wrote in commentary in Science back in June.

No matter what you call it, this type of immunity offers much-needed good news in what seems like an endless array of bad news regarding COVID-19.

Over the past several months, a series of studies has found that some people mount an extraordinarily powerful immune response against SARS-CoV-2, the coronavirus that causes the disease COVID-19. Their bodies produce very high levels of antibodies, but they also make antibodies with great flexibility — likely capable of fighting off the coronavirus variants circulating in the world but also likely effective against variants that may emerge in the future.

“One could reasonably predict that these people will be quite well protected against most — and perhaps all of — the SARS-CoV-2 variants that we are likely to see in the foreseeable future,” says Paul Bieniasz, a virologist at Rockefeller University who helped lead several of the studies.

In a study published online last month, Bieniasz and his colleagues found antibodies in these individuals that can strongly neutralize the six variants of concern tested, including delta and beta, as well as several other viruses related to SARS-CoV-2, including one in bats, two in pangolins and the one that caused the first coronavirus pandemic, SARS-CoV-1.

“This is being a bit more speculative, but I would also suspect that they would have some degree of protection against the SARS-like viruses that have yet to infect humans,” Bieniasz says.

So who is capable of mounting this “superhuman” or “hybrid” immune response?

People who have had a “hybrid” exposure to the virus. Specifically, they were infected with the coronavirus in 2020 and then immunized with mRNA vaccines this year. “Those people have amazing responses to the vaccine,” says virologist Theodora Hatziioannou at Rockefeller University, who also helped lead several of the studies. “I think they are in the best position to fight the virus. The antibodies in these people’s blood can even neutralize SARS-CoV-1, the first coronavirus, which emerged 20 years ago. That virus is very, very different from SARS-CoV-2.”

In fact, these antibodies were even able to deactivate a virus engineered, on purpose, to be highly resistant to neutralization. This virus contained 20 mutations that are known to prevent SARS-CoV-2 antibodies from binding to it. Antibodies from people who were only vaccinated or who only had prior coronavirus infections were essentially useless against this mutant virus. But antibodies in people with the “hybrid immunity” could neutralize it.

These findings show how powerful the mRNA vaccines can be in people with prior exposure to SARS-CoV-2, she says. “There’s a lot of research now focused on finding a pan-coronavirus vaccine that would protect against all future variants. Our findings tell you that we already have it.

“But there’s a catch, right?” she adds: You first need to be sick with COVID-19. “After natural infections, the antibodies seem to evolve and become not only more potent but also broader. They become more resistant to mutations within the [virus].”

Hatziioannou and colleagues don’t know if everyone who has had COVID-19 and then an mRNA vaccine will have such a remarkable immune response. “We’ve only studied the phenomena with a few patients because it’s extremely laborious and difficult research to do,” she says.

But she suspects it’s quite common. “With every single one of the patients we studied, we saw the same thing.” The study reports data on 14 patients.

Several other studies support her hypothesis — and buttress the idea that exposure to both a coronavirus and an mRNA vaccine triggers an exceptionally powerful immune response. In one study, published last month in The New England Journal of Medicine, scientists analyzed antibodies generated by people who had been infected with the original SARS virus — SARS-CoV-1 — back in 2002 or 2003 and who then received an mRNA vaccine this year.

Remarkably, these people also produced high levels of antibodies and — it’s worth reiterating this point from a few paragraphs above — antibodies that could neutralize a whole range of variants and SARS-like viruses.

Now, of course, there are so many remaining questions. For example, what if you catch COVID-19 after you’re vaccinated? Or can a person who hasn’t been infected with the coronavirus mount a “superhuman” response if the person receives a third dose of a vaccine as a booster?

Hatziioannou says she can’t answer either of those questions yet. “I’m pretty certain that a third shot will help a person’s antibodies evolve even further, and perhaps they will acquire some breadth [or flexibility], but whether they will ever manage to get the breadth that you see following natural infection, that’s unclear.”

Immunologist John Wherry, at the University of Pennsylvania, is a bit more hopeful. “In our research, we already see some of this antibody evolution happening in people who are just vaccinated,” he says, “although it probably happens faster in people who have been infected.”

In a recent study, published online in late August, Wherry and his colleagues showed that, over time, people who have had only two doses of the vaccine (and no prior infection) start to make more flexible antibodies — antibodies that can better recognize many of the variants of concern.

So a third dose of the vaccine would presumably give those antibodies a boost and push the evolution of the antibodies further, Wherry says. So a person will be better equipped to fight off whatever variant the virus puts out there next.

“Based on all these findings, it looks like the immune system is eventually going to have the edge over this virus,” says Bieniasz, of Rockefeller University. “And if we’re lucky, SARS-CoV-2 will eventually fall into that category of viruses that gives us only a mild cold.”

Scientists call omicron ‘most mutated virus we’d ever seen.’ Why does that matter? – KTLA