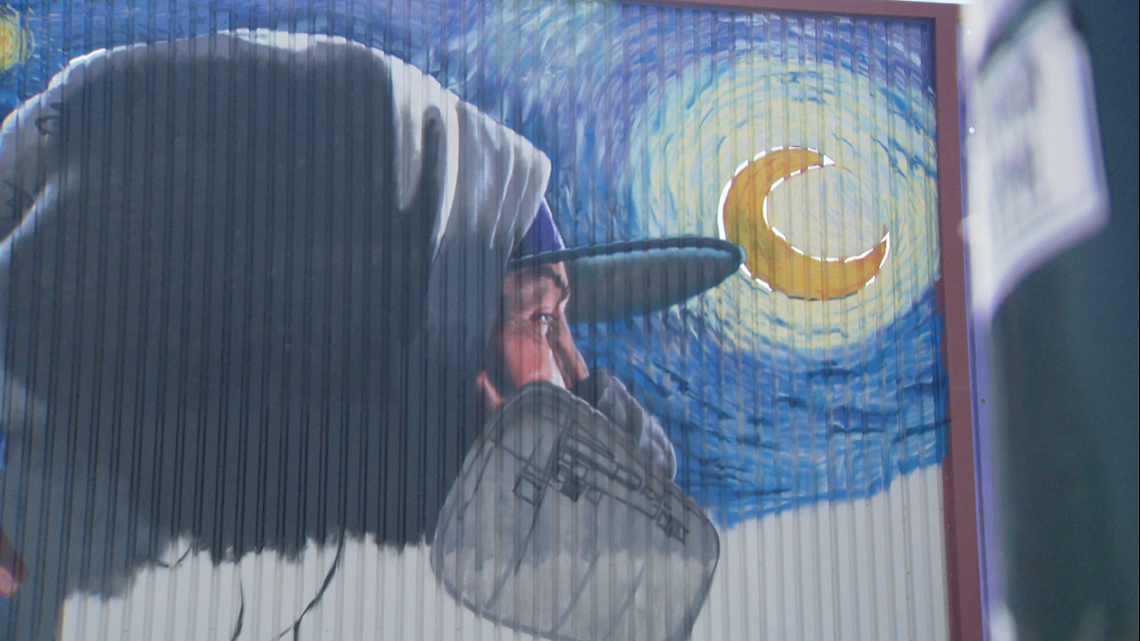 Gamma Gallery created the massive project as a way of giving back to artists who helped inspire the art district.

DENVER — Over the past three years, local artist Gamma Acosta, who goes by Gamma Gallery, has been working on Denver’s largest mural.

The project is 400 feet wide and 36 feet tall and is in the RiNo (River North Art District) neighborhood. Gamma said it pays tribute to local artists who passed away recently who helped establish the area’s art-influenced reputation.

“It was important to give back to the artists,” he said. “I wouldn’t have my opportunities without that graffiti scene or my friends that brought me along.”

Gamma credits the artists Bits, Ikon, Skape, Doer and Preach, who gave him the opportunity to create his graffiti art. He said he prides himself on being able to paint, so he doesn’t use grids or projectors to create his images.

The art project is made of corrugated metal, with elements he said people need to see in person.

“I’ve carved into certain sections of it so that the sky and the light can shine through,” he said. “It will create like a Braille pattern and the cars are driving through, it’ll sprinkle a little sunlight on your car.”

The large mural is part of his gallery located at 3000 Brighton Boulevard in Denver. He said the whole point of the project is the appreciation of the artists that he wants others to see.

“We just can’t get over it,” Cheryl Seghezzi, who’s visiting Colorado from Boston, said. “It’s not like he has a canvas in front of him and he’s painting. It’s just flowing with his hand through his body. It’s beautiful.”

“It’s the biggest mural in Colorado that’s about one concept,” he said. “You can paint something big and have all the talent in the world, but if you’re not saying anything with it, then it’s just wallpaper.”

Gamma said it was important for him to give back to the artists who helped create the neighborhood where he now works and helped him develop an art voice of his own.

“The message is anyone successful stands on the shoulders of giants, even if you’ve never heard of them,” he said.