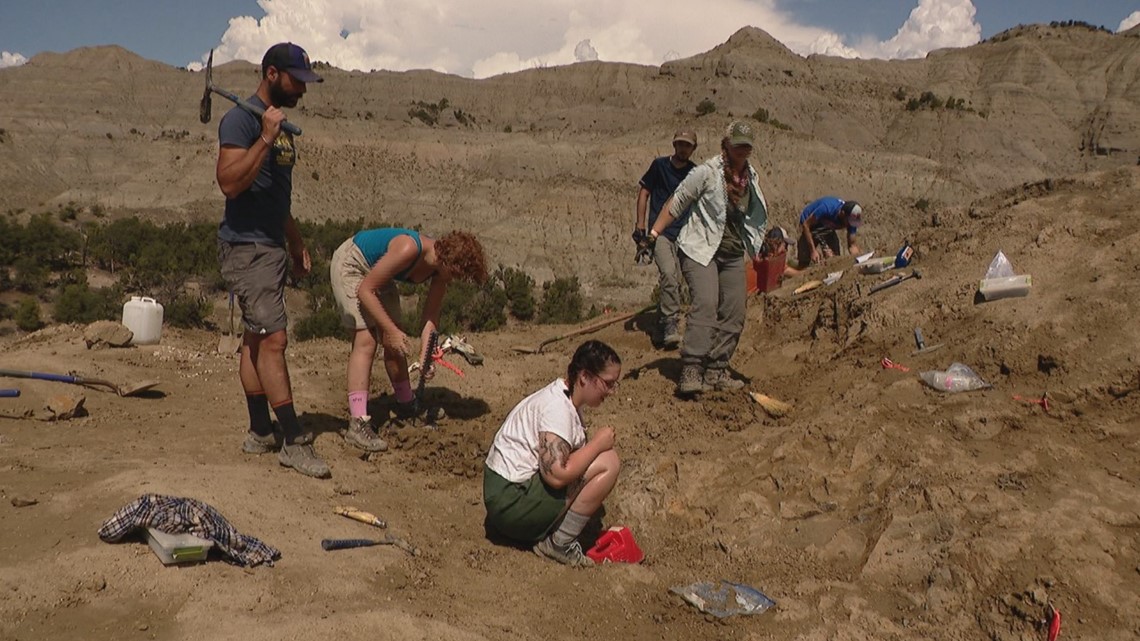 The bones uncovered by Colorado students could teach paleontologists more about Kosmoceratops, a relative of the Triceratops that lived about 76 million years ago.

ESCALANTE, Utah — In the wildest dreams of a boy or girl, dinosaurs roam in a place that looks like southern Utah on a July morning.

Lush, green trees sprout from towering, jagged cliffs of red rock. In the valley below, rainwater from the night before trickles through a sandy wash.

The scene might feel prehistoric, if not for the sounds of pancakes sizzling on a camp stove and sleepy humans emerging from tents.

Sertich knew he would need the energy for another long day. The paleontologist and curator of dinosaurs at the Denver Museum of Nature and Science (DMNS) was about to lead a group of Colorado State University (CSU) students and interns on a dinosaur dig.

It was the culmination of a class Sertich was teaching on dinosaurs.

“It is tiring, but yeah, I love it,” said Makayla Hutchinson. “I feel like I’m totally meant for the laborious work out here.”

Hutchinson is an intern at the fossil prep lab at DMNS. This was her first time in the field.

“The best thing is to expect the unexpected when you’re in the field,” said J. Colter Johnson, a recent CSU graduate and aspiring paleontologist who joined the trip.

Perhaps the only thing guaranteed on this day was the hike to the dig site, a remote spot inside Grand Staircase-Escalante National Monument.

“We’re going to try and walk there without stopping,” Sertich said, as the group adjusted their hiking packs for the three-mile haul.

Sertich and the group trekked through mostly muddy terrain until they reached a large mound of dirt and rock.

“A lot of our sites are on big, high ridges,” Sertich explained. “So, we’re always clinging with our toes to the sides of hills.”

This site was special. Sertich said paleontologists had been digging in the area since 2015, after the discovery of multiple bone beds.

“We’ve got beds of plants, we’ve got beds with turtles, and one of the coolest beds we have is right behind us where there is a giant pile of horned dinosaur bone,” Sertich said.

Students got to work, chiseling at the rock and uncovering pieces of bone that Sertich believes could belong to Kosmoceratops, a relative of Triceratops that lived about 76 million years ago.

“It’s this really bizarre horned dinosaur,” Sertich said. “It’s probably the most bizarre because it has eight curled horns, like melted horns over the top of the head, two little spikes that come off to the side, and then a whole array of spikes down the side of the frill.”

Sertich said this kind of horned dinosaur has been found before, in places like Montana and Alberta, Canada.

“But we have one here in southern Utah, so this could be one of the first true horned dinosaur bone beds ever found in southern North America,” Sertich said.

The prehistoric pieces the students helped uncover could teach the world more about a relatively rare dinosaur. Some in the group only dreamed of this kind of work.

“When I was younger, I couldn’t say my own name or ‘mom’ or ‘dad,’ but I could say ‘Triceratops’ and I could say ‘paleontologist,” Johnson said, smiling.

Johnson was the kid who watched dinosaur documentaries instead of cartoons. Hutchinson could relate.

“I was always the kid to be playing in dirt, too,” she said. “I checked out all of the dinosaur library books in the kids section.”

Even Sertich could pinpoint the moment he became fascinated by prehistoric life. He was about 6 years old with his dad in Iowa.

“There was a big flood,” Sertich said. “The flood had scoured out a big area around a dam, so my dad took me out, and we checked out the scour, and it was covered with ancient life from 300, 400 million years ago.”

The intangible suddenly felt real to the boy who grew up to be a paleontologist.

“Being able to go out at that young age, actually put my hand on fossils, actually see them in the ground, really lit that passion, and it’s just never gone away,” Sertich said.

It’s the kind of stuff dinosaurs and dreams are made of.

RELATED: This map shows everywhere fossils have been found in the Denver metro area (so far)