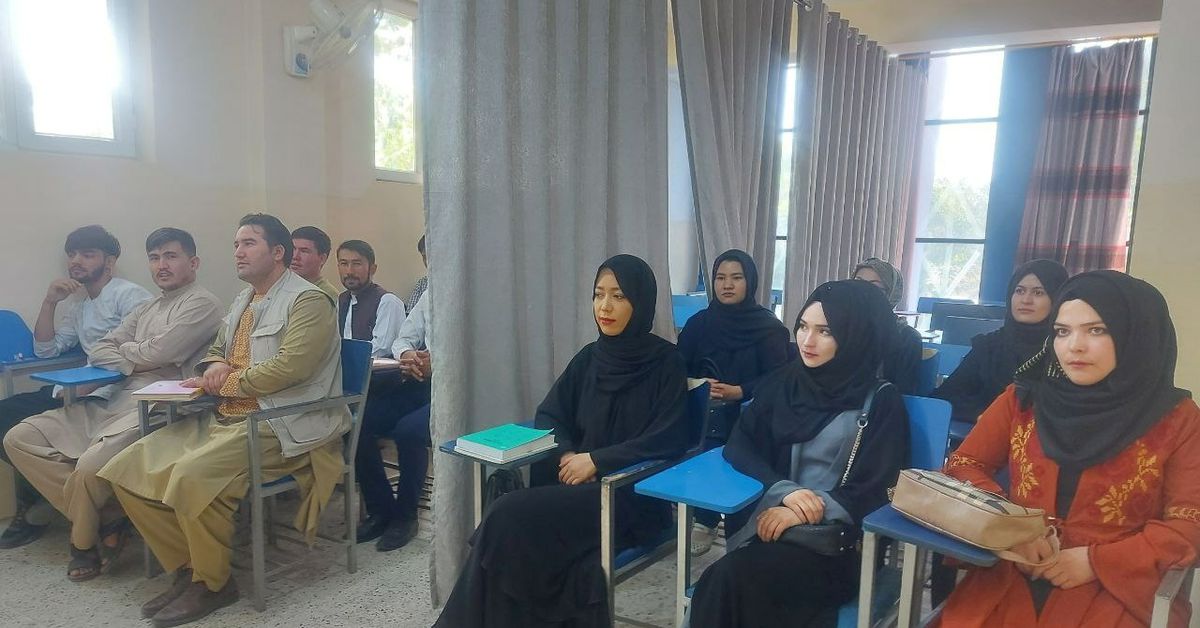 Sept 6 (Reuters) – Students across Afghanistan have started returning to university for the first time since the Taliban stormed to power, and in some cases females have been separated from their male peers by curtains or boards down the middle of the classroom.

What happens in universities and schools across the country is being closely watched by foreign powers, who want the Islamist militant movement to respect the rights of women in return for vital aid and diplomatic engagement.

When it last ruled from 1996-2001, the group banned girls from school and women from university and work.

Despite assurances in recent weeks that women’s rights would be honoured in accordance with Islamic law, it is unclear what that will mean in practice.

Teachers and students at universities in Afghanistan’s largest cities – Kabul, Kandahar and Herat – told Reuters that female students were being segregated in class, taught separately or restricted to certain parts of the campus.

“Putting up curtains is not acceptable,” Anjila, a 21-year-old student at Kabul University who returned to find her classroom partitioned, told Reuters by telephone.

“I really felt terrible when I entered the class … We are gradually going back to 20 years ago.”

Even before the Taliban took over Afghanistan, Anjila said female students sat separately from males. But classrooms were not physically divided.

A document outlining guidelines for resuming class circulated by an association of private universities in Afghanistan listed measures such as the mandatory wearing of hijabs and separate entrances for female students.

It also said female teachers should be hired to teach female students, and that females should be taught separately or, in smaller classes, segregated by a curtain.

It was unclear if the document, seen by Reuters, represented official Taliban policy. The group’s spokesperson did not immediately comment on the document, on photographs of divided classrooms or on how universities would be run.

The Taliban said last week that schooling should resume but that males and females should be separated.

A senior Taliban official told Reuters that classroom dividers such as curtains were “completely acceptable”, and that given Afghanistan’s “limited resources and manpower” it was best to “have the same teacher teaching both sides of a class.”

Photographs shared by Avicenna University in Kabul, and widely circulated on social media, show a grey curtain running down the centre of the classroom, with female students wearing long robes and head coverings but their faces visible.

Several teachers said there was uncertainty over what rules would be imposed under the Taliban, who have yet to form a government more than three weeks after they seized Kabul with barely a shot fired in anger.

Their return to power has alarmed some women, who fear they will lose the rights they fought for in the last two decades, in the face of resistance from many families and officials in the deeply conservative Muslim country.

A journalism professor at Herat University in the west of the country told Reuters he decided to split his one-hour class into two halves, first teaching females and then males.

Of 120 students enrolled for his course, less than a quarter showed up at school on Monday. A number of students and teachers have fled the country, and the fate of the country’s thriving private media sector has suddenly been thrown into doubt.

“Students were very nervous today,” he said. “I told them to just keep coming and keep studying and in the coming days the new government will set the rules.”

Sher Azam, a 37-year-old teacher at a private university in Kabul, said his institute had given teachers the option of holding separate classes for men and women, or partitioning classrooms with curtains and boards.

But he was worried about how many students would come back, given the economic crisis the Taliban’s victory has triggered.

“I don’t know how many students will return to school, because there are financial problems and some students are coming from families who have lost their jobs”.