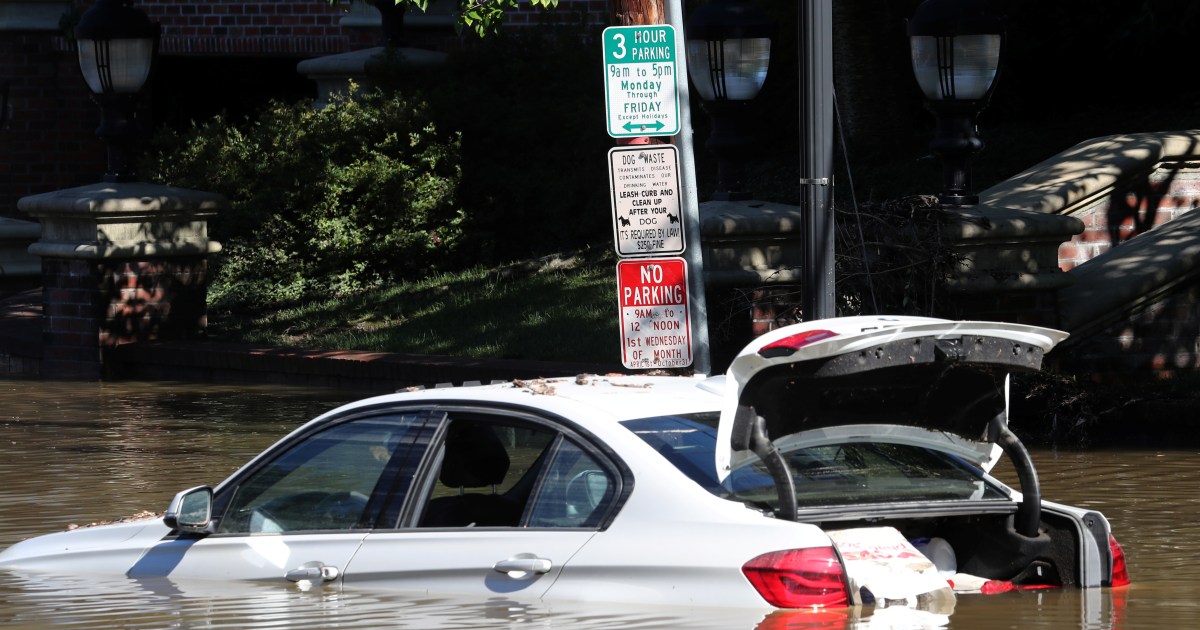 The death toll from Hurricane Ida has risen to at least 50 people in the northeastern United States, while authorities in the southern state of Louisiana where the powerful storm first made landfall worked to restore power to hundreds of thousands of people.

Seventeen deaths were confirmed in New York state, four in Westchester County and the remainder were in New York City, a spokesperson for Governor Kathy Hochul said on Sunday.

Nearly all the victims in New York City, which was hard-hit when the remains of Ida brought flash flooding and heavy rains to the area last week, were trapped in illegal basement apartments that are among the last remaining affordable options for low-income residents.

In New Jersey, there were 27 confirmed storm deaths and four people still missing, said a spokesperson for Governor Phil Murphy. More deaths in the northeast were reported in Connecticut, Pennsylvania and Maryland.

Ida made landfall in Louisiana as a Category 4 hurricane on August 29, bringing extreme winds that downed trees and power lines, and cut power to more than one million people across the state.

The storm-related death toll in Louisiana rose to 13 on Sunday, the state health department said on Twitter, after a 74-year-old man was reported dead “due to heat during an extensive power outage”.

More than 630,000 homes and businesses remained without power on Sunday across southeast Louisiana, according to the state Public Service Commission.

Many Louisiana residents continue to face food, water and gas shortages while battling heat and humidity a week after Ida struck.

Fully restoring electricity to some southeastern parishes could take until the end of the month, Entergy President and CEO Phillip May said on Saturday.

Ida damaged or destroyed at least 22,000 power poles, more than hurricanes Katrina, Zeta and Delta combined. More than 5,200 transformers failed and nearly 26,000 spans of wire – the stretch of transmission wires between poles – were down.

Sadly, LDH can confirm another storm-related death. The Orleans parish coroner has confirmed the death of a 74-year-old male due to heat during an extensive power outage. This brings our #HurricaneIda death toll to 13 at this time.

US President Joe Biden visited Louisiana on Friday to assess the damage from the storm, pledging more federal assistance to help the state rebuild.

“There is no substitute for seeing the devastation on the ground,” Governor John Bel Edwards said on Twitter on Sunday morning, thanking the president for his visit.

“Louisiana faces a long road to recovery ahead, and we appreciate the aid and support of our federal partners.”

As recovery efforts continued, state officials were monitoring a system of disturbed weather in Mexico’s Bay of Campeche, which appeared set to move into the central Gulf of Mexico closer to Louisiana.

Predictions so far do not show the system strengthening into a hurricane, but Edwards on Saturday said “even if it’s a tropical storm, we’re in no state to receive that much rainfall at this time”.

“How do you staff up shelters you need for the new storm and continue to test for COVID? My head’s getting painful just thinking about it,” Edwards said. “We will be as ready as we can be, but I’m praying we don’t have to deal with that.”

New Orleans Mayor LaToya Cantrell said the city would offer transportation to any resident looking to leave the city and get to a public shelter.

By the end of Saturday, city agencies conducting wellness checks had evacuated hundreds of people out of eight senior living complexes where officials deemed conditions unfit for living. The coroner’s office is investigating four post-storm deaths that occurred at three of those facilities.

The US Coast Guard said on Saturday that clean-up crews were responding to a sizable oil spill in the Gulf of Mexico in the aftermath of the storm. A private dive team was trying to locate the source of the spill in the Bay Marchand area on Sunday.

Arlo Hemphill, a senior oceans campaigner at Greenpeace USA, said this type of incident “is happening again and again and again because we’re putting critical fossil fuel infrastructure in the direct line of climate change impacts”.

Scientists and other experts for years have said that climate change is worsening the strength and severity of weather events, such as hurricanes and wildfires.

Hemphill told Al Jazeera on Sunday that marine life, including fish and dolphins, in the affected areas would be immediately affected by the spill, while coastal communities could also face a danger of toxicity.

“This is an extremely vulnerable region,” he said. “This is land that’s just above sea level. Some islands are disappearing. Some communities that live on coastal islands are already having to think about relocating inland.”