The Longhorns started the 2021 season the way every team wants to, in the win column.

Steve Sarkisian silenced the doubters in the 38-18 win. Many had expected the Longhorns, with a new staff and new players all over the field, would struggle mightily against the 23rd-ranked Louisiana Ragin’ Cajuns.

That was not the case. The Longhorns trailed for the blink of an eye after a Louisiana field goal at the beginning of the first quarter. Texas took control and made a huge statement by beating a ranked team that finished 10-1 last season.

There were many positives for Texas, which started the Sarkisian era 1-0, something former head coach Tom Herman could not do.

In each game, there are always people who play really well and stand out and some that do not play to the best of their ability.

Let’s take a look at three duds, those who did not perform as well as expected, and three studs, players who performed well and contributed significantly to the win.

Since we’re only doing three, a couple of studs aren’t included, but should be listed as honorable mentions: DeMarvion Overshowm, Luke Brockermeyer and, of course, Steve Sarkisian for his play-calling. 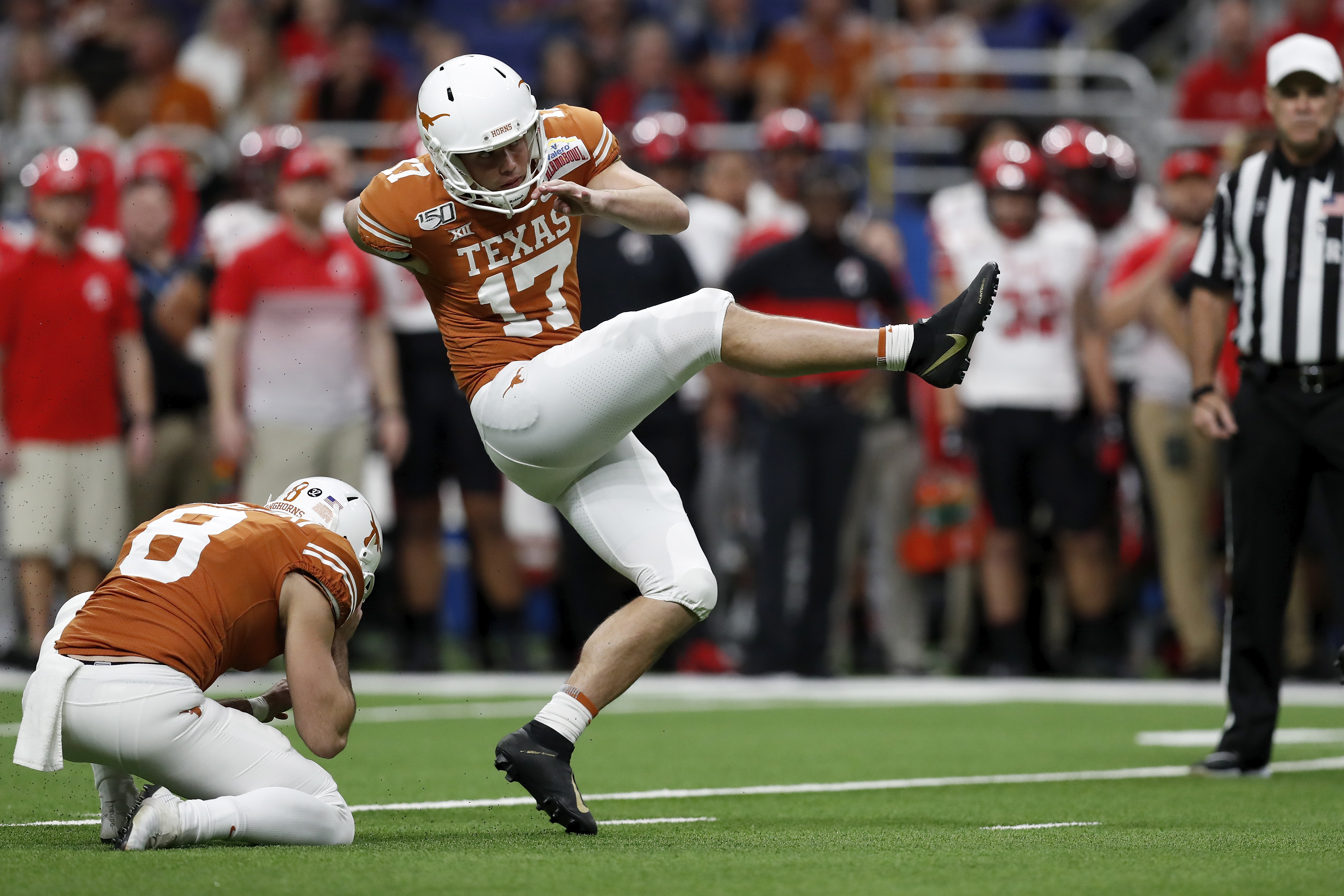 The senior kicker started his career making 72% of his field goals as a freshman, followed that with a fantastic sophomore year making almost 78% of his kicks, and then saw the numbers decline astronomically last season making just 71%.

Early against Louisiana, with the Longhorns leading by four, the offense got into the red zone, but couldn’t finish. Dicker was called upon for a 45-yard field goal.

Any time you have a chance to score, you must capitalize especially with a young quarterback. Dicker has long struggled with kicks beyond 39 yards; he is a career 65% from 40-49 yards. Obviously, not many college kickers make every kick, but his struggles from this range lengthen the field for the offense. Dicker needs to replicate the consistency he displayed his sophomore year in order to allow the Longhorns to capitalize on every scoring chance, and simply just so the staff can trust him in crucial situations. 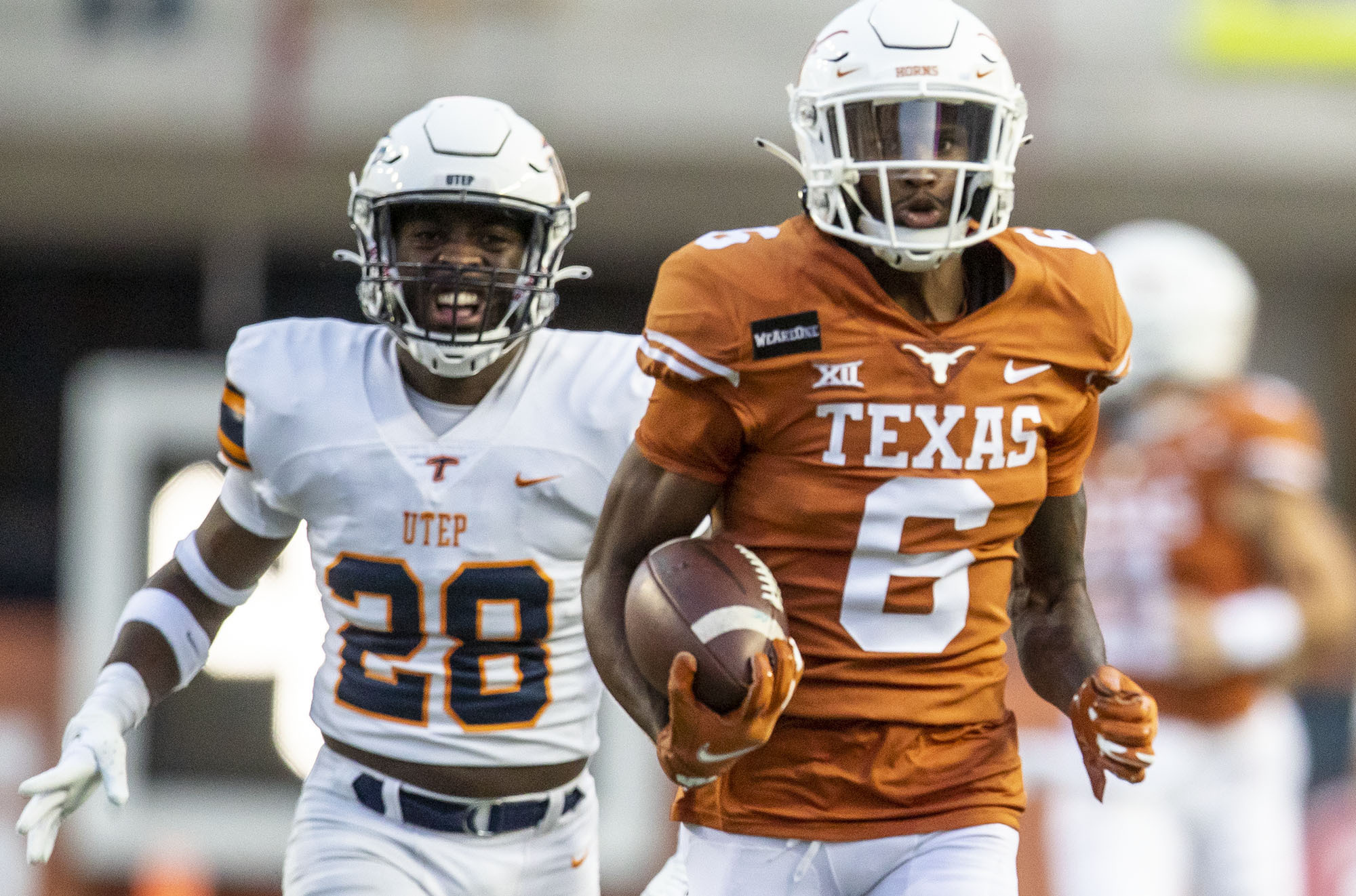 Ricardo B. Brazziell/Austin American-Statesman via AP

The Longhorns receiver corps has been one of the biggest question marks during the offseason. No one solidified himself as the guy. Jordan Whittington did so Saturday. He erupted for seven catches and 113 yards and one touchdown. All other receivers combined for four catches and 51 yards.

They aren’t the sole group responsible as the next dud likely led to some of the receivers’ struggles. But in a very receiver-friendly offense, it was very disappointing to see just one receiver take advantage. Whether the plays weren’t designed for them or Card missed them, I expected more out of  Joshua Moore and highly touted freshman Xavier Worthy. They can only control what they can control, but they did not look like the three-headed monster they have the potential to be. 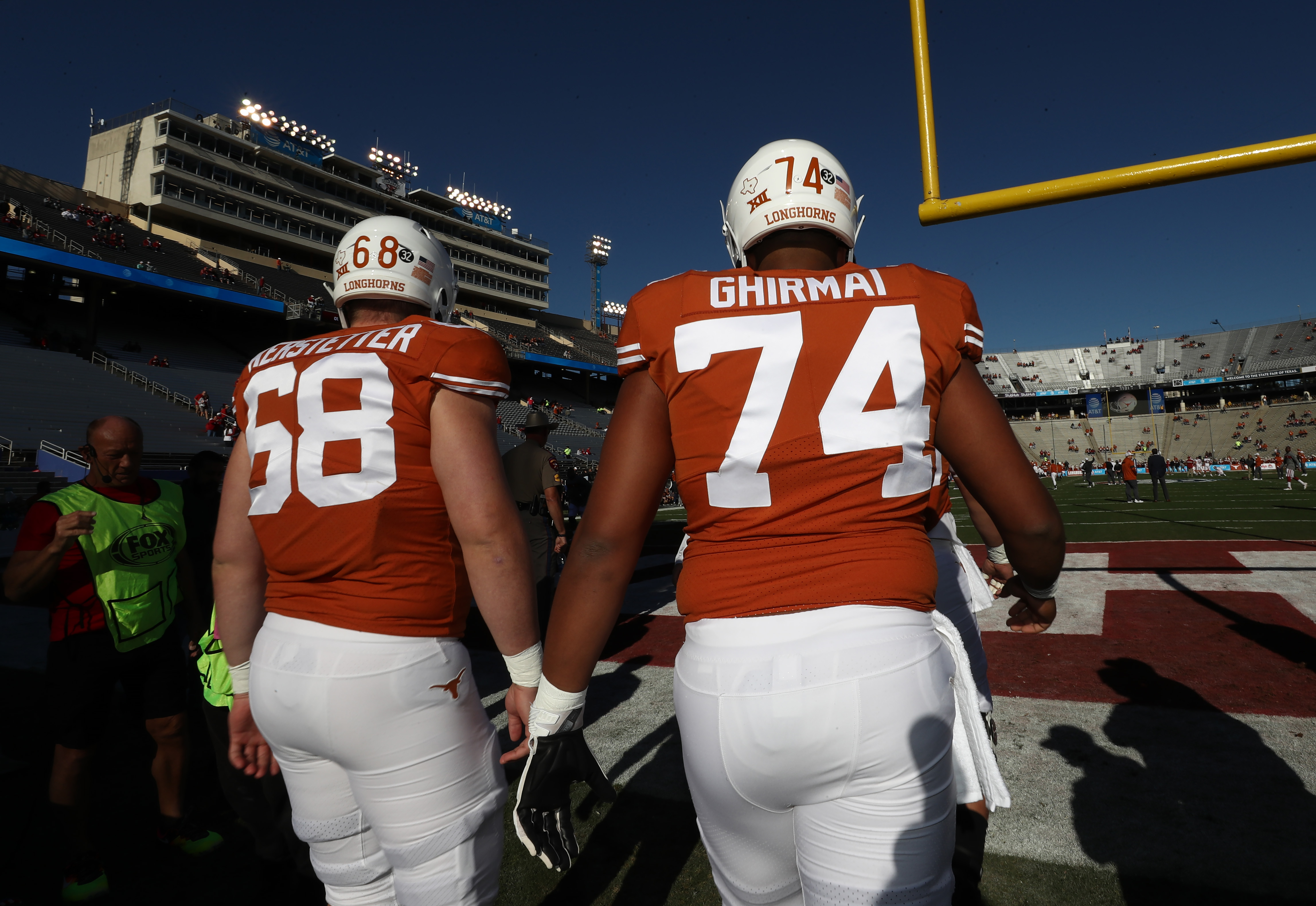 The offensive line easily had the worst performance of the game of any position group. It seemed Louisiana was in the backfield on every pass play, and if it were not for Bijan Robinson being one of the most elusive people in college football, the run game might have struggled as well.

Whether it was false starts, holding or simply not blocking, the offensive line has a lot to work on this week. Having a young quarterback always having to worry about pressure in his face is not ideal, especially when the pressure did not allow plays to develop. The receiver group did not put up great numbers in part because Card rarely had time to go through his reads. The offensive line gave up five sacks to a Group of Five program, which is worrisome a week before taking on Arkansas. The unit needs to step up, otherwise Texas will have a very disappointing season. 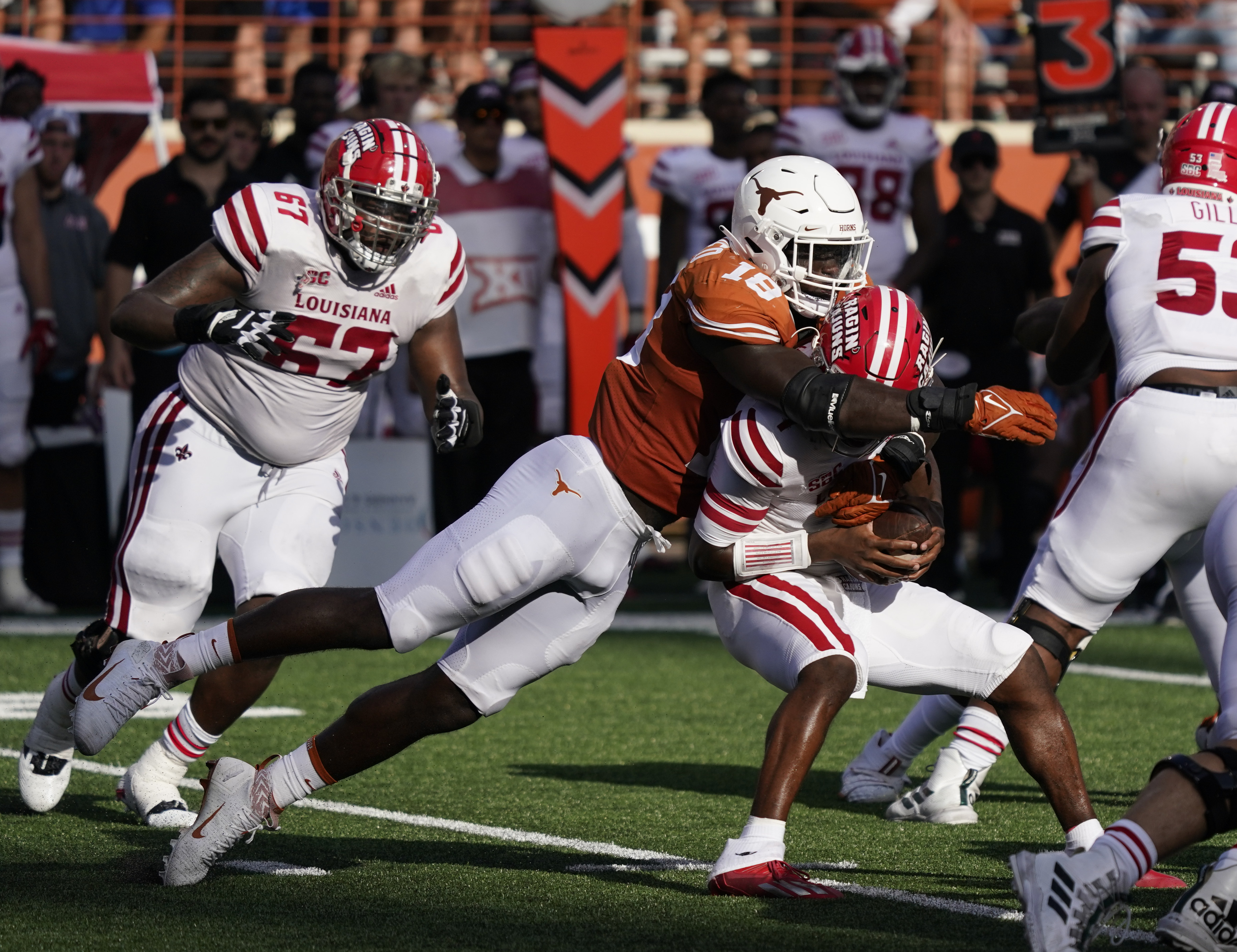 The Notre Dame transfer made his presence felt all game, and he generated a lot of pressure on Louisiana quarterback Levi Lewis. A few players on defense could have gotten this honor, but Oghoufo’s sack toward the end of the third quarter was a fantastic play.

The Longhorns badly needed to find someone to replace the production they lost when Joseph Ossai left for the NFL, and Oghoufo showed he very well could be the player to do so. The defense as a whole had seven sacks, but none came at a more clutch time than his. The coaching staff had been speaking highly of Oghoufo recently, and on Saturday he showed why. 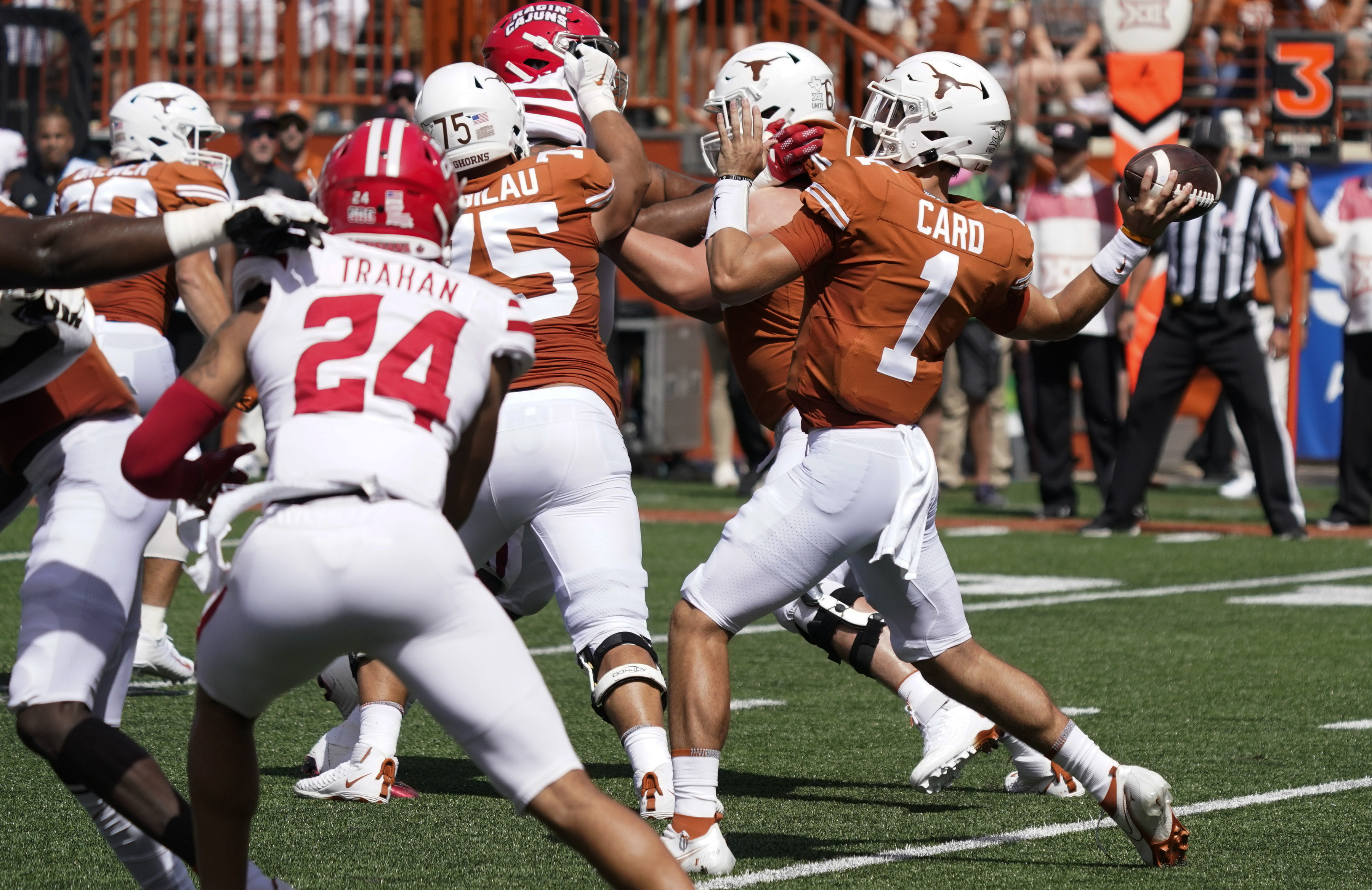 The redshirt freshman had a great debut as the starting quarterback. After beating junior Casey Thompson for the starting gig, Hudson Card really had to come out and prove head coach Steve Sarkisian made the right choice. He got off to a slow start, completing one pass in his first few attempts. Once he found his rhythm, he was great.

The young quarterback completed 14-of-21 passes for 224 yards, two touchdowns and ran in a touchdown. His numbers likely would have been even better if the offensive line could actually block someone so he would have more time to throw, or if he wasn’t taken out in order for Casey Thompson to get playing time. He showed poise and great decision making, and it is safe to say the Longhorns are in good hands. 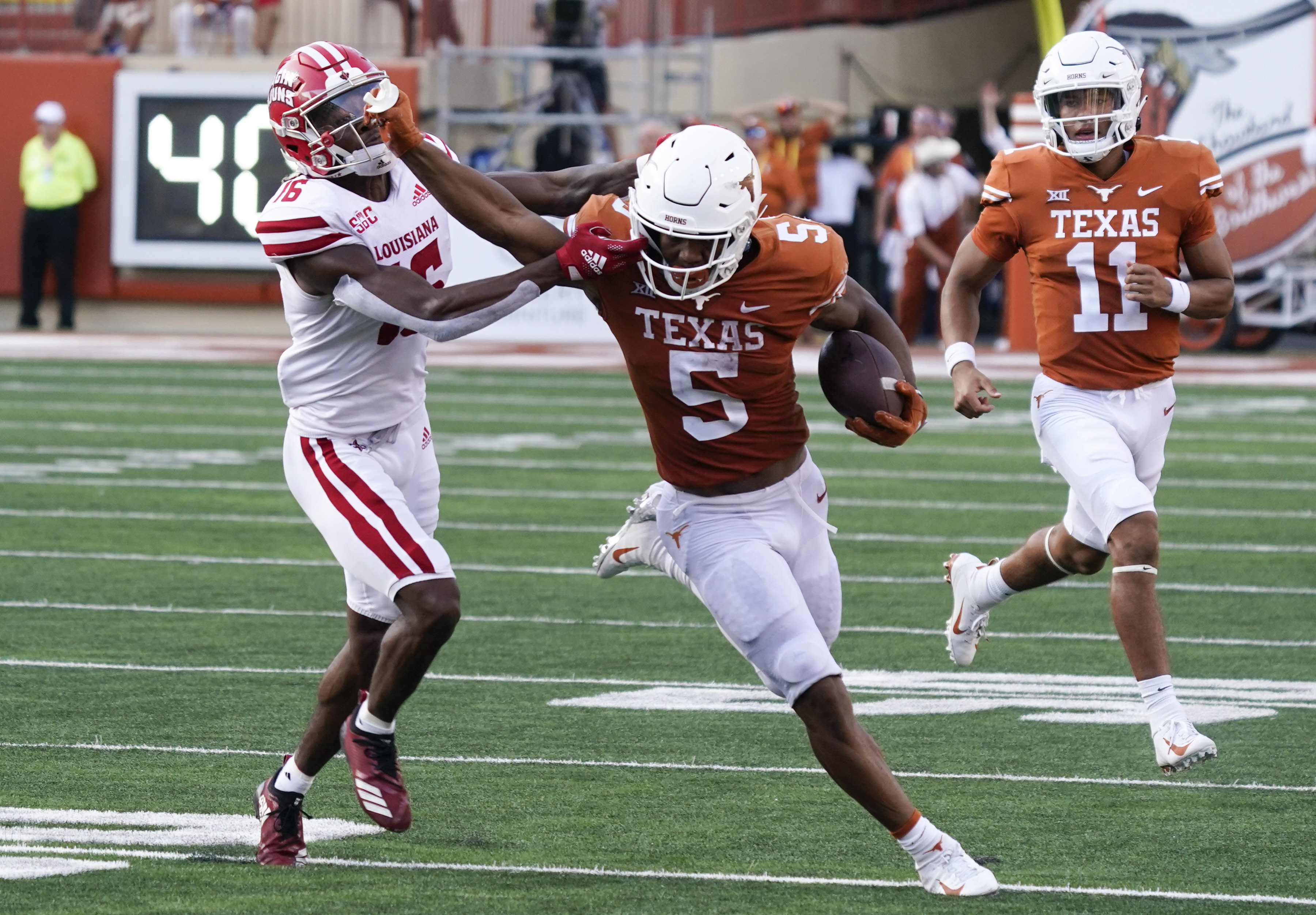 This one was a given. Bijan Robinson preformed like the star he is. When the offense was not able to generate anything through the air, he helped the Longhorns move down the field. He finally was used properly and even contributed greatly in the passing game.

Robinson finished with 103 yards rushing and one rushing touchdown, while catching four passes for 73 yards and a touchdown. It seemed as if anytime Texas needed to move the ball or simply needed a spark, Robinson was there to oblige. He was extremely hard to bring down, and having him will help the Longhorns hide their other weaknesses.