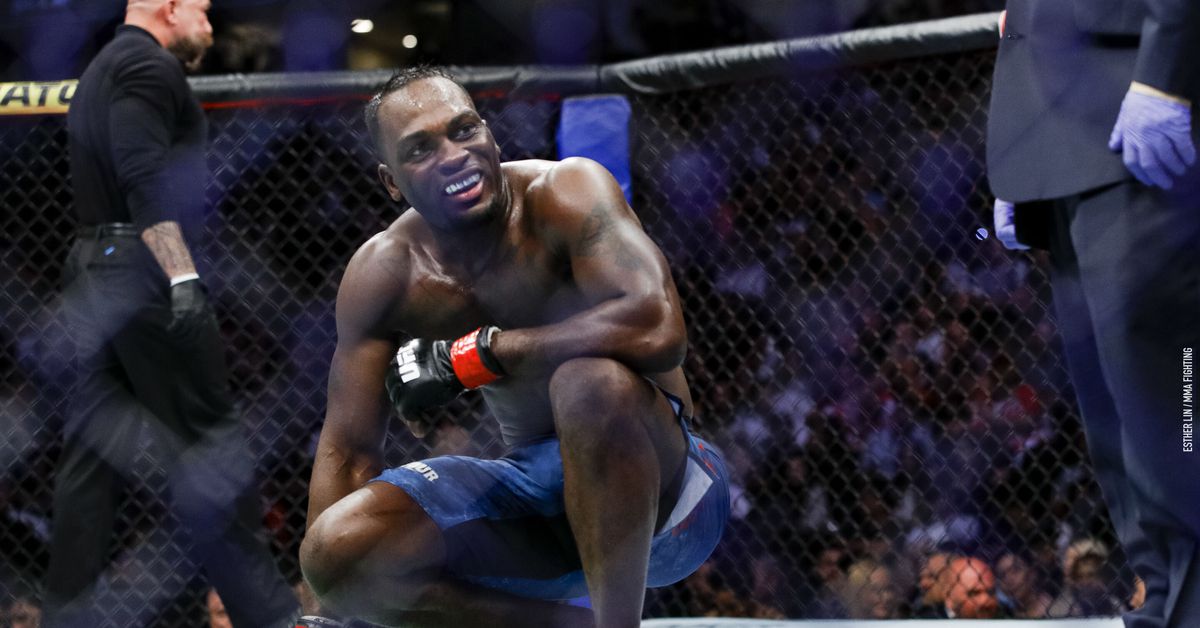 What an incredible UFC London card the promotion has put together for Saturday.

It’s a shame that it’s taking place in Las Vegas though.

With respect to Vegas and the UFC APEX, today’s card was originally planned to take place in London, which is why it features Liverpool’s Darren Till in the main event against fellow middleweight contender Derek Brunson, as well as other standouts from the U.K. such as Tom Aspinall, Molly McCann, Jack Shore, and the debuting Paddy Pimblett.

The ongoing COVID-19 pandemic threw a wrench into those grand plans and while Saturday’s show is still a strong one, it would have been that much more special with some familiar faces fighting in front of a raucous English crowd for the first time since March 2019.

Imagine the roar of the fans seeing Till score a big knockout against Brunson? Or McCann have her hand raised after a three-round scrap with Ji Yeon Kim? Or Pimblett make his mark in the octagon with a fast finish? There’s still the potential for plenty of great moments at UFC Vegas 36, but they won’t be quite as memorable as they could have been.

Credit to the UFC team for keeping this card together after a number of withdrawals and postponements. The show must go on and maybe the next time the promotion is actually able to return to the U.K, the aforementioned British fighters will be heading home as conquering heroes.

Where: UFC APEX in Las Vegas

When: Saturday, Sept. 4. The four-fight preliminary card begins on ESPN+ at 2 p.m. ET, followed by a five-fight main card on ESPN and ESPN+ at 4 p.m. ET.

The stage is set for Darren Till to sweep Derek Brunson’s title hopes right out from under him.

After 14 months away from competition and nearly two years removed from his most recent win, Till’s fortunes are somehow just as bright as ever. Maybe it’s his fighting style or his outspoken personality or just that “It factor” that so many fighters would kill to have, but the fact is that a win on Saturday puts Till on the short list for a title fight with Israel Adesanya and the same might not be true for Brunson. There’s a reason Adesanya has named Till has one of his preferred challengers as opposed Brunson, who Adesanya defeated on his rise to the top of the middleweight division.

Brunson can stop all of that talk with another strong performance. It’s easy to pick a Brunson fight because he only loses to elite competition and he dominates mid-tier competition. So if you think Till is elite, he’s the pick here; if he isn’t, then go with Brunson.

It will be a challenge for Brunson to impose his will on Till, an agile fighter with excellent footwork who has shown flashes of good takedown defense. Brunson has rededicated himself to his wrestling and that’s his best path to victory here, even though he certainly has pop in his hands. But trading with Till is risky as the Scouser has hurt some of the best fighters he’s faced, rocking Robert Whittaker in the first round of their fight and scoring a knockdown against Jorge Masvidal.

I’m still not convinced that Till is a contender at 185 pounds, even after seeing him go eight competitive rounds with Whittaker and Gastelum. So I’m sticking with Brunson to grind out a decision.

I’d like this matchup a lot more for Serghei Spivac if he wasn’t taking it on a week’s notice. On paper, he actually matches up well with Tom Aspinall at least as far as fundamental striking and grappling goes. However, Aspinall has an edge in athleticism, which is one factor that makes him such an intriguing heavyweight prospect.

Spivac can be frustrating to watch at times as he clearly has the tools to be a top-10 heavyweight, he just hasn’t put it all together and there are still too many moments where he shies away from offensive opportunities. That’s not an issue at all for Aspinall, who has been an outstanding closer since signing with the UFC. Some fighters just have that nose for a finish and Aspinall is one of them.

A slow start could doom Spivac here and I like Aspinall’s chances of racking up another first-round knockout.

This could be a showcase fight for the underappreciated David Zawada.

Inactivity and some tough stylistic matchups have kept Zawada off the grid, but a win over the always game Morono could be just what the German needs to start building some career momentum. Zawada is a fun striker to watch, with sharp kickboxing, accurate punches, and a solid chin.

Those same descriptors could be used for Morono, though I give Zawada the edge in technical skill. It’s close though and I expect there to be some dramatic swings in this fight as they take turns establishing control. This bout has all the makings of a standup show-stealer.

Morono has the edge in UFC experience, which can’t be overlooked. Win or lose, he’s sharper for having faced the likes of Donald Cerrone, Anthony Pettis, Max Griffin, and Niko Price. Zawada hasn’t had much luck with decisions and it’s Morono who could pull away in the third round if this goes the distance.

I favor Zawada to either find a finish early or build up enough of a lead on the cards that he can afford a competitive final round. Zawada by decision.

Speaking of fights that could steal the show, another round of applause for the matchmakers please for setting up this Modestas Bukauskas vs. Khalil Rountree battle. Both fighters want to stand, both want to land bombs. What more could you ask for?

It’s tough to overcome the quickness and raw power of Rountree, but I think Bukauskas has the tools to do it. He’s methodical and probably Rountree’s equal when it comes to strength, he just has to manage the gas tank to avoid a late drop-off. That’s easier said than done when you have a strong starter like Rountree coming at you.

Bukauskas has a more varied striking arsenal, I’m just not sure that matters in fight like this where both fighters have so much KO potential. My gut says Bukauskas, but who really knows in a volatile matchup like this?

I don’t know if this is the walkover that Paddy Pimblett and the UFC are expecting it to be.

Pimblett is known for his aggressive grappling, which could lead to some fun scrambles with Luigi Vendramini, a black belt in jiu-jitsu who hasn’t really had the chance to show off that aspect of his game inside the octagon. If “Paddy the Baddy” thinks he’s going to just overwhelm Vendramini on the ground as he has many of his past opponents, he could be surprised.

That means we could see plenty of striking here, which pits Pimblett’s ever-improving standup against the wild, yet effective Vendramini. Pimblett will want to keep this one at a distance to set up takedown attempts, while Vendramini will aim to pressure and fire straight punches at Pimblett’s head.

Pimblett has been predicting a first-round finish, but I have a weird feeling this one goes the full 15 with Pimblett settling for a narrow decision win.