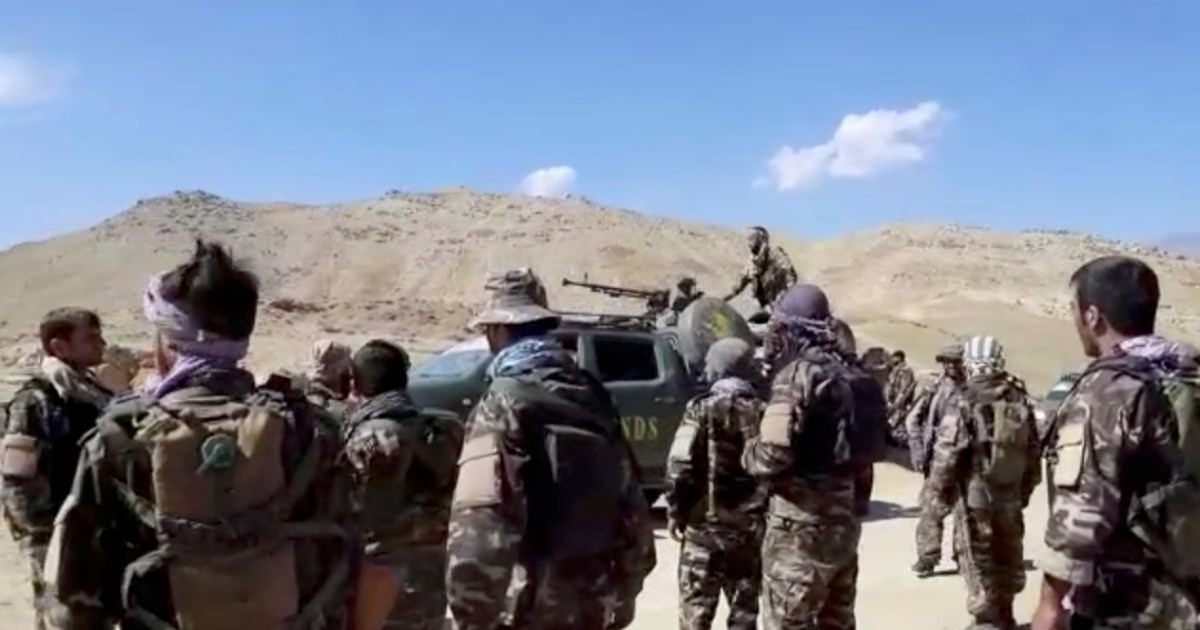 Fighting was reported on Saturday between the Taliban and resistance forces in Afghanistan’s Panjshir Valley, the last region in Afghanistan holding out against the armed group.

A spokesman for the National Resistance Front (NRF) of Afghanistan, which groups opposition forces loyal to local leader Ahmad Massoud, said Taliban forces reached the Darband heights on the border between Kapisa province and Panjshir but were pushed back.

“The defence of the stronghold of Afghanistan is unbreakable,” Fahim Dashty said in a tweet.

A Taliban source said fighting was continuing in Panjshir but the advance had been slowed by landmines placed on the road to the capital Bazarak and the provincial governor’s compound. “Demining and offensives are both going on at the same time,” the source said.

Facing the challenge of morphing from rebels to rulers, the Taliban appears determined to snuff out the Panjshir resistance before announcing who will lead the country in the aftermath of Monday’s US troop withdrawal, which was supposed to end two decades of war.

But Panjshir, which held out for nearly a decade against the Soviet Union’s occupation and also the Taliban’s first rule from 1996 to 2001, is stubbornly holding out.

Fighters from the NRF – made up of anti-Taliban militia and former Afghan security forces – are understood to have stockpiled a significant armoury in the valley, 80km (50 miles) north of Kabul and guarded by a narrow gorge.

Celebratory gunfire rang out in the capital Kabul overnight as rumours spread that the valley had fallen. The Emergency Hospital in Kabul said two people were killed and 20 wounded by the salvos, as the Taliban tweeted a stern admonishment warning its fighters to stop.

“The weapons and bullets given to you are public property. No one has the right to waste them. The bullets can also harm civilians, don’t shoot in vain.”

In Panjshir, former Vice-President Amrullah Saleh, holed out alongside Ahmad Massoud – the son of anti-Taliban commander Ahmad Shah Massoud – admitted the perilous position of the NRF.

“The situation is difficult, we have been under invasion,” Saleh said in a video message. “The resistance is continuing and will continue.”

Taliban and resistance tweets suggested the key district of Paryan had changed hands several times in the last few days, but that also could not be independently verified.

Away from the valley, the international community was coming to terms with having to deal with the new Taliban regime with a flurry of diplomacy.

US Secretary of State Antony Blinken is due on Sunday in Qatar, a key player in the Afghan situation and the location of the Taliban’s political office.

UN Secretary-General Antonio Guterres is also set to convene a high-level meeting on Afghanistan in Geneva on September 13 to focus on humanitarian assistance for the country.

Afghanistan’s new rulers have pledged to be more accommodating than during their first stint in power, which also came after years of conflict – first the Soviet invasion of 1979, and then a bloody civil war.

They have promised a more “inclusive” government that represents Afghanistan’s complex ethnic makeup – though women are unlikely to be included at the top levels.

Meanwhile, there were some signs of normality creeping back in the Afghan capital.

The first commercial flight took off on Saturday from Kabul to Mazar-i-Sharif after the airport’s runway was repaired. Qatar’s ambassador to Afghanistan also said a technical team was able to reopen Kabul airport to receive aid.

The airport has been closed since the US completed operations on August 30 to evacuate diplomats, foreigners and Afghans deemed at risk from the Taliban. However, tens of thousands of people could not be flown out.

Taliban’s Mujahid also said one of the main foreign exchange dealers in the capital had reopened.

Impoverished Afghanistan’s economy has been thrown into disarray by the takeover by the Taliban. Many banks are closed and cash is in short supply.