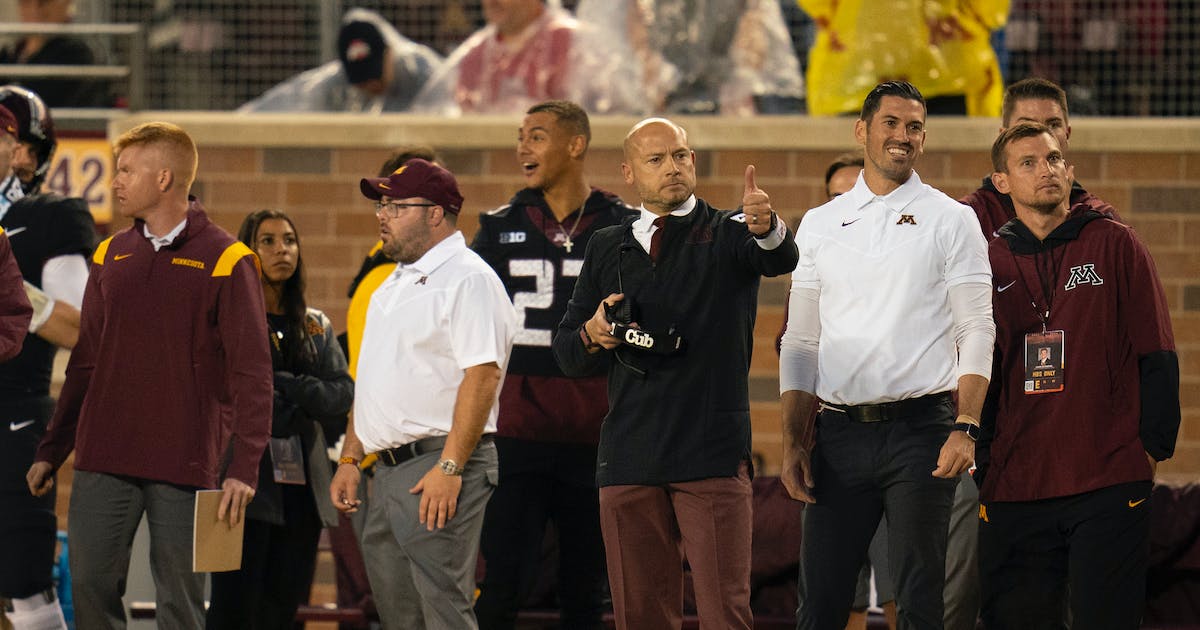 The inexperienced Ohio State defense had escorted the Gophers deep into Buckeyes territory early in the second half. The possession had included an egregious pass interference penalty, and then a borderline roughing call for brushing quarterback Tanner Morgan that nullified an interception.

The Gophers had reached the Buckeyes’ 19 with these assists and then Mohamed Ibrahim burst free on the right side for a touchdown that put the home team ahead, 21-17, with the extra point.

Gus Johnson, the excitable voice of college football for Fox, knew precisely where to give the credit for this turn of events:

This had been a theme Gus seized shortly after Ibrahim’s 56-yard run on fourth-and-1 from his 29 early in the second quarter, a jolt that turned play in the Gophers’ favor.

Again, the credit went primarily to Coach Fleck for taking the risk, not so much to Ibrahim and the magnificent cut that he made in turning 3 yards into 56.

The TV crews in these situations get access to coaches for interviews a day or two ahead of time, and often are handed unique insights.

This was an opening national telecast to the first full-scale college weekend and P.J. came through for Gus and his analyst Joe Klatt in their meeting:

Fleck’s secret recipe for springing an upset on Thursday would be to make the Ohio State coaches “coach” for the entire night.

Apparently, this meant putting the Buckeyes coaches in a constant state of adjusting to the Gophers’ offensive packages, and creating such a state of sideline frenzy that it could increase pressure on rookie quarterback C.J. Stroud to make plays.

That’s the way I interpreted it, anyway, after hearing Gus use it as an explanation for Gophers’ moments of success a few times and then, presto, in Gus-World, P.J.’s ploy had become the key for a pending upset:

At that point, I started feeling a bit of sympathy for coach Ryan Day, the 42-year-old who came up through the assistant ranks to assume the Buckeyes’ hot seat full time in 2019.

The last game he had coached was in January, a 52-24 loss to Alabama in the national title game. On that night, the Buckeyes were right in there, trailing 21-17 late in the second quarter, and then momentum swung and they were outscored 31-7 the rest of the way (Bama, 52-24).

Thus, Day’s most recent coaching test had been against Alabama’s Nick Saban, both the past and present of college football. And now, eight months later, here was the poor guy being outsmarted and having momentum stolen by Philip John Fleck, the future of college football.

Imagine the surprise when those overwhelmed Buckeyes coaches got themselves off the deck and came up with a couple of ideas.

First, they told Garrett Wilson to run open down the middle and take a 56-yard touchdown pass from Stroud. Then, they told Zach Harrison to pressure Morgan; hence, he was there when the Gophers quarterback held the ball for an extra second, Harrison slapped it away and Haskell Garrett stumbled 32 yards for a touchdown.

That made it 31-21 Buckeyes entering the fourth quarter, which included no mention of the Ohio State coaches still being in chaos by the demand for in-game adjustments to counter the wily P.J.

The fourth quarter included a flick of a pass from Stroud to TreVeyon Henderson, and that ballyhooed freshman turned it into 70 yards.

Of course, the first three of those came from Irving Fryar (two) and Mike Rozier, with Turner Gill as the quarterback, as Nebraska eased away from the Gophers, 84-13.

Which could be Day’s scoring target if he ever gets Fleck in Columbus in a year when the Buckeyes have a full-bore defense to go with the usual explosive athletes on offense.

Until then, the Buckeyes staff can keep Gus’ high-volume tribute to P.J.’s genius, ending with, “They’re confused,” in a safe digital place.

Civilian tip to Fleck: Next time the Gophs are playing a real opponent, start with coaching your D-backs to stay in the same ZIP code as receivers, and then go to making their coaches coach.

As for that local whining we’re hearing today about Buckeyes D-backs getting away with pass interference: Remember, the Gophers also could’ve gotten away with some of that if they had been close enough to interfere.