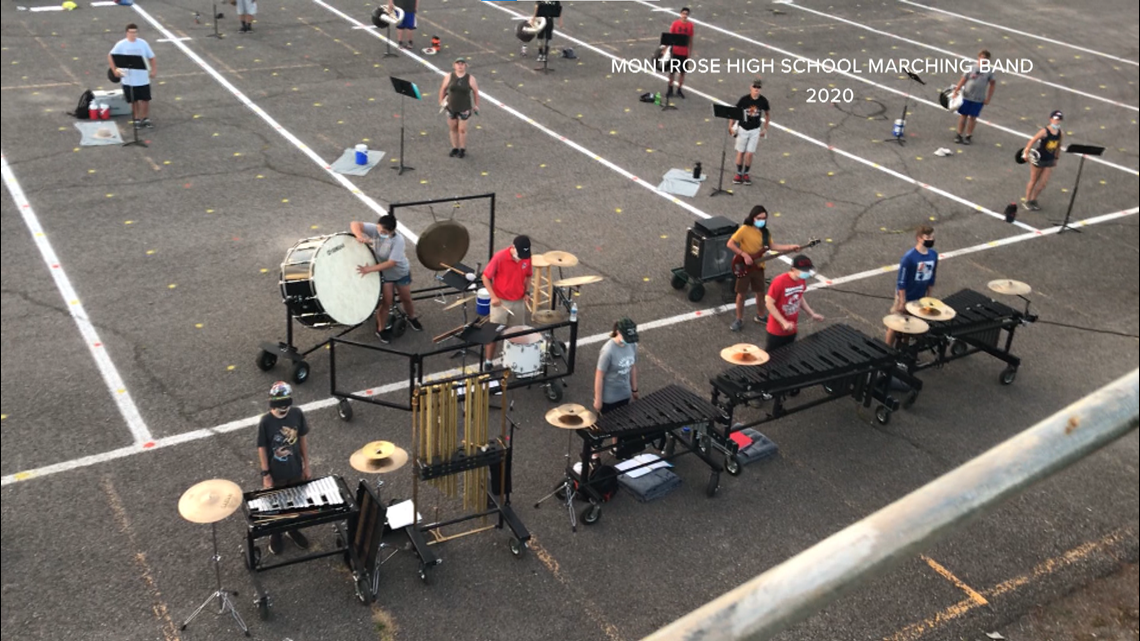 In part four of the “Hearts of Champions” series, students at the Western Slope high school said they are excited to get back to competition.

MONTROSE, Colo. — The third stop on our “Hearts of Champions” tour is with the Pride of Montrose high school marching band, which has adapted a theme of overcoming adversity.

“Oftentimes, it feels like we’re on a slightly different planet from the rest of Colorado,” said Sheridan Loyd, band director at Montrose High School, which is about 70 miles north of Telluride.

“For the towns out on the Western Slope, we have to do much more traveling in order to compete than other schools do,” Loyd said.

The band hasn’t traveled to compete since 2019, when state championships were canceled due to weather.

In 2020, because Montrose County was Code Yellow on the state’s COVID-19 dial, the marching band was one of the few in the state that was able to practice in-person while maintaining social distancing.

RELATED: ‘Lots of energy and hard work’: Conifer High School marching band gets back to basics

“During band camp last year, they were actually playing and performing in four different cohorts all toward a center point,” Loyd said. “We actually have two fields with a fence in between and a tower, and so all the kids would be facing in towards the tower performing at the same time.”

RELATED: Centaurus High School marching band is ready to reconnect on the field

This year, band members are learning to play together again at their pre-season band camp.

These camps are held in the heat of the summer, starting around the first weeks of August. They last usually for two weeks and for about 10 hours a day.

“We have all of our winds, percussion and color guard coming together and really starting to form the show,” Loyd said. “So they’re not just learning how to march, but march and play.”

RELATED: After two years away, Colorado marching bands are ready to take the field

Band members do calisthenics, run and get in shape, so they can learn to perform a 7 ½ minute show. It’s a show they’ll perform while marching, running, playing their instruments and tossing flags.

“It really helps them push through exhaustion and how to just keep on going,” said drum major Sarah Hartman. “It’s really just getting the building blocks and the basics down so that when we get into the school year, it’s less stressful.”

Hartman and Julia Beshoar are drum majors who are entering their senior year. They agreed that not being able to compete for a state title has been disappointing.

“Our senior class has never marched at state because weather keeps on canceling it,” Beshoar said. “We’re in the same mental space as our freshmen.”

“They’ve been through a lot this last year, and there were ups and downs this whole last season,” Loyd added. “There were a lot of things that we had to work together to push through.”

Loyd said that her 4A marching band expanded this past year to 93 members, unlike most marching bands across the state that have seen their numbers drop during the pandemic.

“We’re really fortunate this year because we actually grew,” Loyd said. “So, we’re excited to see that and to stay strong for this next year.”

“You can kind of feel it in the band,” Beshoar said. “I think we’ve kind of forgotten what competition show is like, and as we get closer to the September dates, it’s kind of, like, rising in us.”

It’s a feeling that’s getting this marching band back to normal and hopeful to bring a state championship to the Western Slope.

“The students out here are super hardworking and ready to go,” Loyd said. “So we’re excited to show Colorado what we’re able to do this year.”

Editor’s note: This story is part of 9NEWS’ “Hearts of Champions: The Re-set” series, where we’re highlighting marching bands across the state. Watch our full stories throughout the day on Fridays through the middle of September. Share your photos and memories with us using #Bandon9.

RELATED: ‘I was choking back tears’: Marching band competition season canceled in Colorado