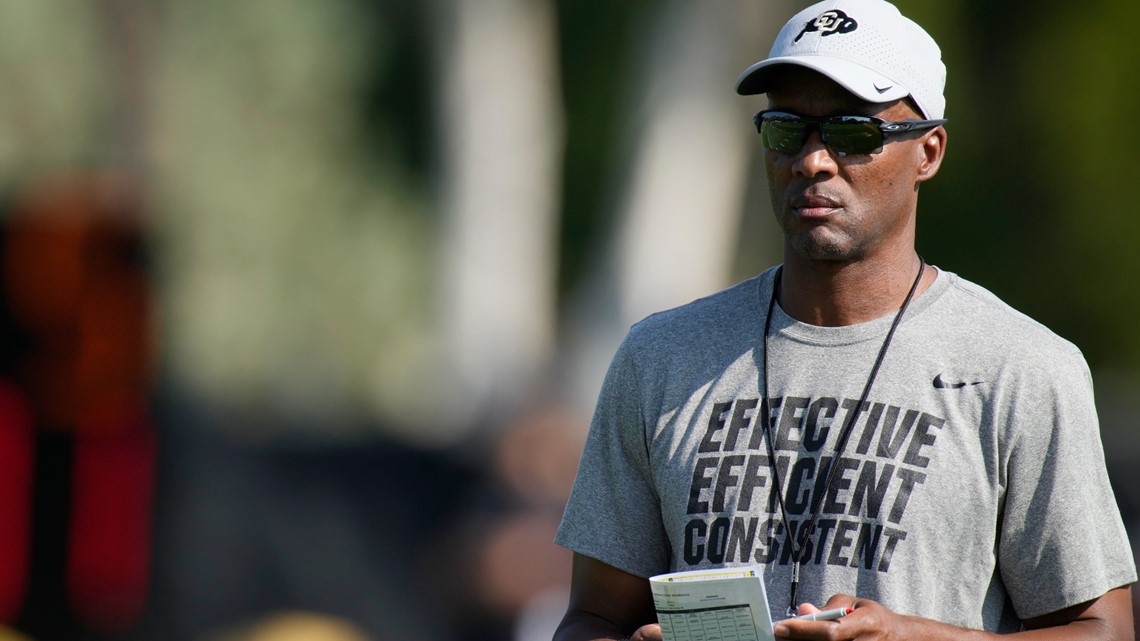 “That’s really what his body of work that we know in the past is really from that,” CU Head Coach Karl Dorrell said.

But Dorrell knows a lot more about McCaffrey, dating back to 2000 in Dove Valley. The current leader of the Buffs was once the leader of the Broncos wide receiver corps.

“The reason why he’s on that road to ascension is because of his playing style. He was very detailed, very specific, a hard study guy,” Dorrell said.

“It was a lot of fun on my part, but on the other side, I had to know what I was talking about. If I said something that wasn’t true, or wasn’t factual, or didn’t work, they kept me on my toes about that,” Dorrell said. “So I had to make sure I studied a little harder than they did so I could answer questions like that.”

With four boys at home, McCaffrey was also kept on his toes. His eldest son Max is now his offensive coordinator at UNC. Christian is a Pro Bowl running back in Carolina. Dylan, who graduated Valor Christian in 2017, just recently announced his transfer to join his dad and brother as the quarterback of the UNC Bears. Ed and Lisa’s youngest son Luke, who graduated from Valor in only 2019, transferred from Nebraska to Louisville and then to Rice this offseason.

With so much talent in the household, Dorrell said he saw a natural gift for teaching and coaching.

“The reason they were all successful was because there was a lot of teaching in the McCaffery household,” he said. “It’s part of his fabric. I believe this is a great profession for him and he’ll do a great job, I just don’t want it to happen on Friday.”

UNC and CU kick off at 7 p.m. on Friday night from Folsom Field. The game is broadcast on Pac-12 Network, and will feature the debut of Ralphie XI.

> Top stories curated daily just for you! Sign up for the 9NEWSLETTER to get can’t-miss stories, Next and Denver Broncos content, weather and more delivered right to your inbox.

For both Apple TV and Fire TV, search for KUSA “9news” to find the free app to add to your account. Another option for Fire TV is to have the app delivered directly to your Fire TV through Amazon.