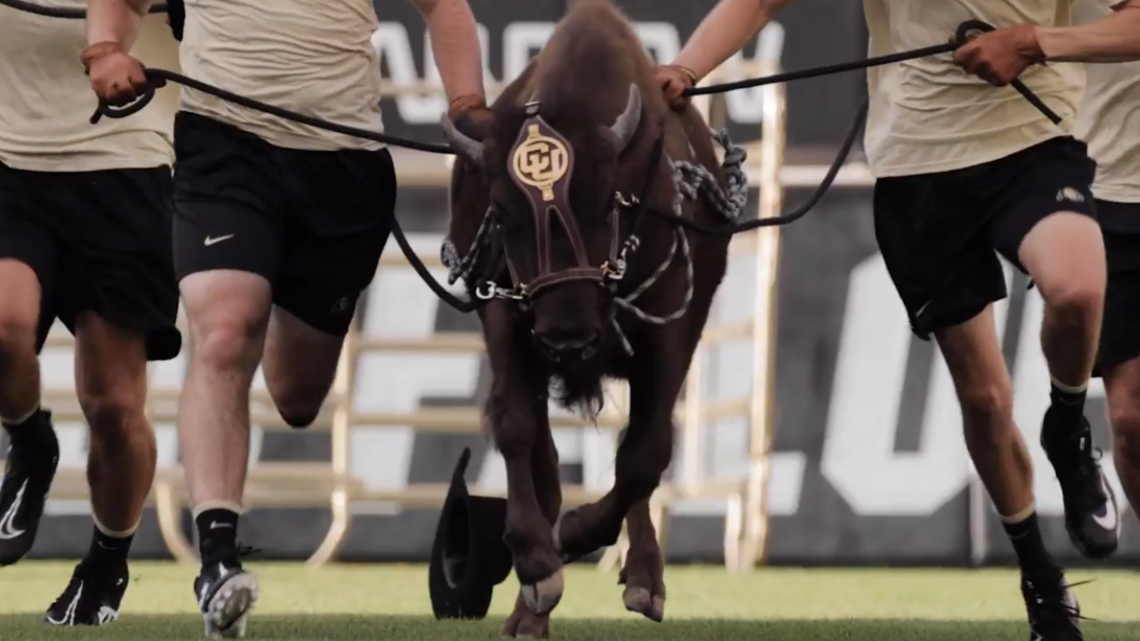 Ralphie VI will make her debut Friday night at Folsom Field at the football team’s season opener against the University of Northern Colorado (UNC).

BOULDER, Colo. — Fact: Ralphie is the greatest mascot in sports.

Full disclosure: this author is a University of Colorado alum

Fact-ish: Ralphie was named after a student at CU in the 1960s. Or was she?

This is the story…or stories about how Ralphie (nee: Ralph) got her name.

“I was involved in the first group of people that ran the Buffalo in 1967-’68,” said Lex Pinson. “I named Ralphie as part of a contest that the sophomore class put on, I believe in fall of 1967.”

Pinson, who now lives in Hawaii, attended CU in the late ’60s.

His friend and college roommate, Larry Ambrose, wants Pinson to get the credit he deserves.

“We were 20-something-year-old college students,” Ambrose said. “You know, going out and drinking every night, well not every night, but if we did, we knew what ‘ralph’ meant.”

“The name was, kind of, a tongue in cheek, thumb your nose at the establishment,” said Pinson. “It was, kind of, meant to conjure up the act of vomiting. In your face! Ralph!”

He passed away in early 2020, but his sister remembers the story and believes Ralphie is named after her brother.

“It’s certainly possible that, yeah, both stories could be true, I guess,” said Pinson.

Ralph became Ralphie once it was realized she was a she.

“Then they found out that their little buffalo was female, and so that’s how she became Ralphie,” said Hobscheid.

RELATED: Ralphie V to retire after 12 seasons with CU

Pinson’s story is corroborated by Ambrose and Glenn Porzak, who says he was in the room when Ralph was selected as the name.

They tell the story as it being a contest by the sophomore class, since the tradition was going to be that sophomore students would run Ralphie out onto the field.

“When I submitted the name, I did it as a joke,” said Pinson. “There wasn’t a lot of deep thought here.”

Pinson and his friends also sold “Buffalo Stock” to help fund a trip to get Ralphie — er, still Ralph at the time (actually, Rraalph), to the Blue Bonnet Bowl.

The stock they sold earned a stockholder petting and feeding privileges, a locket of her hair and even a two-by-three poster of the buffalo.

The CU media guide also presents a third naming story. That Ralphie is named for the sound she makes running and snorting.

“I would ex-nay that one,” said Pinson. “My naming of it seems to be lost in history. I have a few friends, like Larry and others around Boulder that say, ‘hey, you should get credit for this, and I just kind of shrug my shoulders and go, meh, you know, whatever.'”