Patrick Cantlay spoke up about the negative attention Bryson DeChambeau has been getting, particularly after the BMW Championship, and he seems to believe that it has something to do with the PGA Tour’s new popularity incentive.

Cantlay, 29, told reporters ahead of Thursday’s Tour Championship that he feels for DeChambeau following the latest incident in which he was the subject to taunts from fans over the weekend, resulting in a new rule that will remove anyone from events that yell out “Brooksie.”

RORY MCILROY SYMPATHIZES WITH BRYSON DECHAMBEAU AMID HARSH CRITICISM: ‘HE IS HIS OWN PERSON’

“Naturally, of course, there is some sympathy because you don’t want to see anybody have a bunch of people be against you or even be heckled,” Cantlay said, via Golf Week.

But Cantlay says the problem is bigger than just simple fan behavior. He believes it has something to do with the new PGA’s Player Impact Program.

“Unfortunately, it might be a symptom of a larger problem, which is social media driven and which is potentially Player Impact Program derived,” Cantlay added. “I think when you have people that go for attention-seeking maneuvers, you leave yourself potentially open to having the wrong type of attention, and I think maybe that’s where we’re at and it may be a symptom of going for too much attention.”

The PGA Tour announced in April that it created a new bonus program that will reward golf’s top 10 players based on popularity among fans and sponsor engagement. According to GolfWeek, the program runs through the regular calendar year, and the $40 million reward will be distributed amongst the winners, with the top player earning $8 million.

Social media presence and Google search frequencies are among the metrics that are used to come up with the top 10.

“I think it’s just a very live-by-the-sword, die-by-the-sword type of deal,” Cantlay said of it. “And when you leave it to a jury, you don’t know what’s going to happen.” 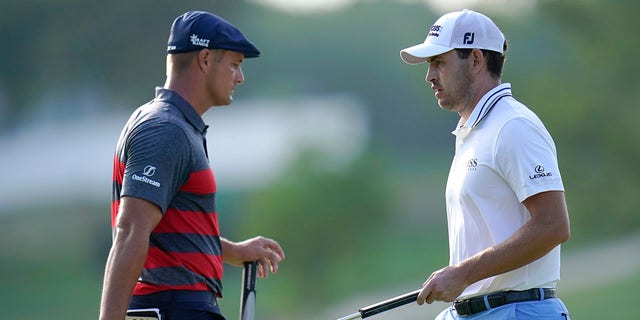 Patrick Cantlay, right, walks by Bryson DeChambeau after he sank his putt on the 17th green during the final round of the BMW Championship golf tournament, Sunday, Aug. 29, 2021, at Caves Valley Golf Club in Owings Mills, Md. (AP Photo/Julio Cortez)

For players like DeChambeau, Cantlay says the PIP incentive can create problems.

“If those people have had enough to drink or feel emboldened enough to say something because they want to impress the girl they’re standing next to, then, yeah, like, you’re in trouble.”

Cantlay made a reference to a popular 1996 Adam Sandler movie for comparison.

“Maybe people have watched too much ‘Happy Gilmore’ and they don’t feel enough sympathy for Shooter McGavin. I don’t know. I don’t know the answer.”

Cantlay described himself as not being “the cookie cutter golfer” and not someone who would probably land in the top-10 most popular players, but if he does, he’s giving that money right back to the fans.

“I am going to give it back to the people that made it possible in some way, shape or form. I won’t take any of the PIP money,” he said. “I think it’s kind of ridiculous and I think it’s, when I said there’s a symptom of a larger problem, I think that’s exactly what I’m talking about.”

PGA Tour commissioner Jay Monahan said Tuesday that when the final standings are determined, the Tour does not plan to reveal the winners.

“We don’t have any intention on publicizing it,” he said, via Golf.com.