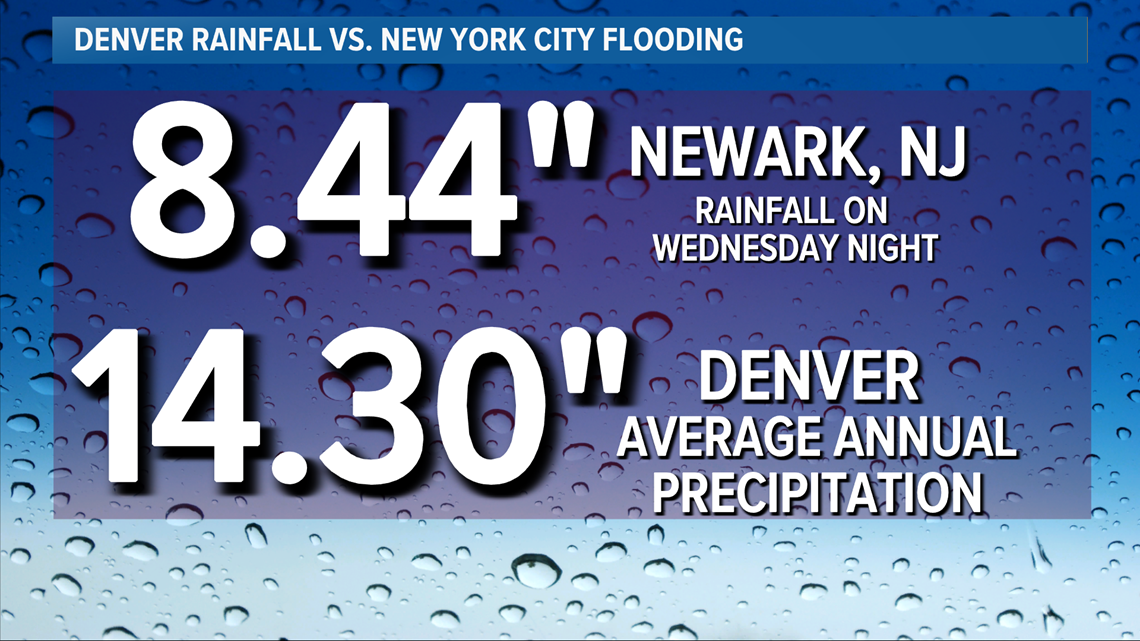 Some parts of the New York City area saw as much rain as parts of Colorado saw during the September 2013 floods.

DENVER — After seeing some of the horrific deadly flooding out of the Northeast that took place on Wednesday night, you might be wondering just how much rain the area saw and want some context behind those numbers.

It should also be noted that almost all of those astronomical Northeast rain totals happened in just two to four hours on Wednesday night – undoubtedly turning the floods far more severe than they otherwise would have been.

But to bring that into some extra local perspective, consider this: Denver averages 14.30 inches of rain…in a year. That means Newark saw about 60% of Denver’s average annual rainfall in about five hours on Wednesday night.

Newark’s 8.44-inch rainfall total is also equal to the amount of rain and snow that Denver has seen over the last 171 days combined.

You might also remember the Greeley floods from early July. Parts of Greeley saw about 3-4 inches of rain in about two hours during that deluge, about half of what New York City saw during a similar time window on Wednesday night.

Finally, if you’ve been here for a few years, the benchmark for Colorado flooding is almost always the September 2013 floods.

As we’ve detailed already, New York City saw around 6-8 inches of rain in four to six hours on Wednesday night. During the nearly week-long September 2013 flooding, Denver, Boulder and Fort Collins saw about 10-15 inches of rain. But again, the 2013 floods took place over a far longer time period than Wednesday night’s Northeast flooding.

Of course, New York City’s concrete-laden streets and buildings enhance not only the floods themselves, but the impacts from them.

That said, hopefully this gives you a bit of context about just how much rain New York City saw on Wednesday night.