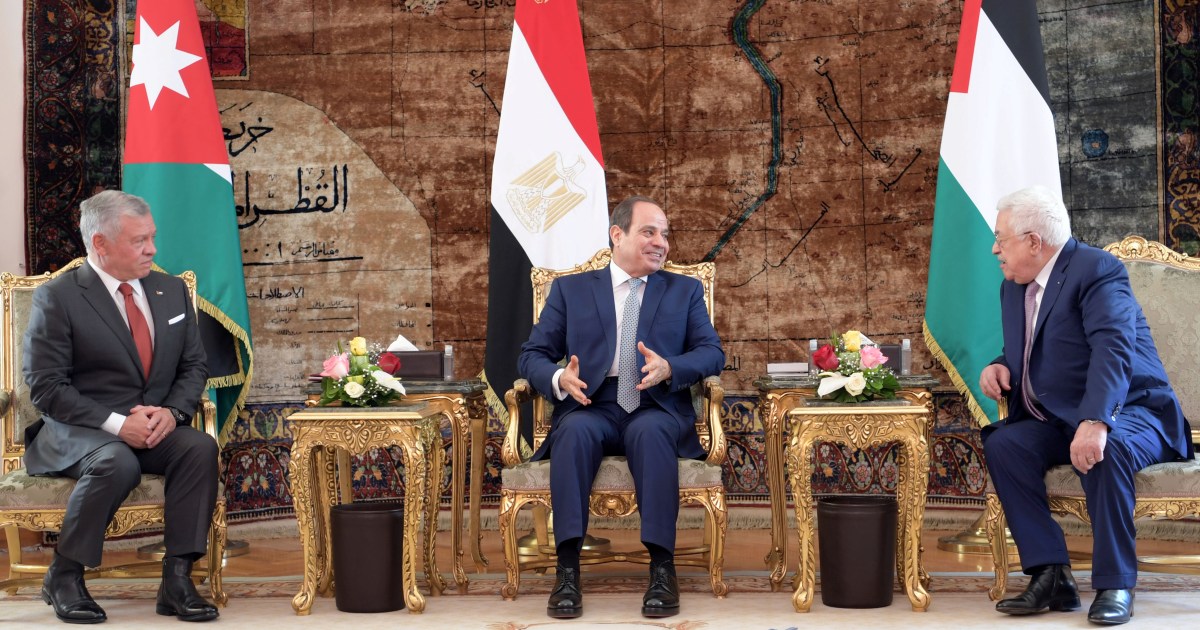 Egypt’s president has held talks in Cairo with the king of Jordan and the president of the Palestinian Authority (PA) aimed at reviving the Middle East peace process and strengthening a ceasefire that halted the latest escalation in violence between Israel and Hamas.

Egypt’s Abdel Fattah el-Sisi, King Abdullah II of Jordan and the PA’s Mahmoud Abbas discussed the elusive two-state solution to the Israeli-Palestinian conflict on Thursday, according to a statement from el-Sisi’s office.

The three leaders pledged “to work together to refine a vision to activate efforts aimed at resuming negotiations, and work with brothers and partners to revive the peace process”, the statement read.

In an address at the Cairo talks, Abbas said that although an escalation of Israeli “violations” had made a two-state solution in line with international law unattainable, the PA was committed to peaceful methods.

“We renew our readiness to work in this stage to prepare the atmosphere by the application of confidence-building steps that include achieving comprehensive calm in Palestinian lands,” he said, according to a text published by the official Palestinian news agency Wafa.

Relations remain tense, even though Israel’s new coalition government, which includes a party led by Palestinian citizens of Israel for the first time, has sought to keep things calm after the deadly violence in May.

Hamas, a Palestinian group that rules the besieged Gaza Strip, responded to weeks of tensions in occupied East Jerusalem by firing rockets towards the city, which triggered a withering Israeli assault on Gaza.

At least 260 Palestinians were killed during the conflict, including 67 children and 39 women, according to the Gaza health ministry. Hamas has acknowledged the deaths of 80 fighters. Twelve civilians, including two children, were killed in Israel, along with one soldier.

Egypt, which has played a key mediation role between Israel and Hamas over the years, mediated a truce. In recent weeks, stakeholders have stepped up their diplomatic efforts aimed at preventing another military outburst in the region. The office of Israeli Prime Minister Naftali Bennett has recently said that he will be visiting Egypt “soon” to hold talks with el-Sisi.

Those talks signalled a possible shift after the near-complete breakdown in communication between Abbas and Israeli leaders in recent years.

The meeting was followed by the Israeli announcement of a series of gestures aimed at strengthening the PA, which rules parts of the occupied West Bank. The measures included plans to loan $150m to the cash-strapped PA government in Ramallah.

Last month, Egypt’s intelligence chief Abbas Kamel paid a rare visit to Israel to discuss conditions for a long-lasting ceasefire deal between Israel and Hamas. Kamel had also travelled to the West Bank to meet with Abbas, whom the US and Israel would like to bolster in his rivalry with Hamas.

In Thursday’s talks, the Egyptian and Jordanian leaders also renewed their support of Abbas, warning against the “dangerous repercussions” of the expansion of illegal Israeli settlements in the West Bank and the demolition of Palestinian houses and the confiscation of land properties, read the Egyptian presidency statement.

For his part, el-Sisi stressed that the establishment of a Palestinian state requires the unification of all Palestinian factions, added the statement.

Hamas has governed Gaza since ousting Abbas’s forces in 2007, a year after it defeated his Fatah party in Palestinian parliamentary elections.