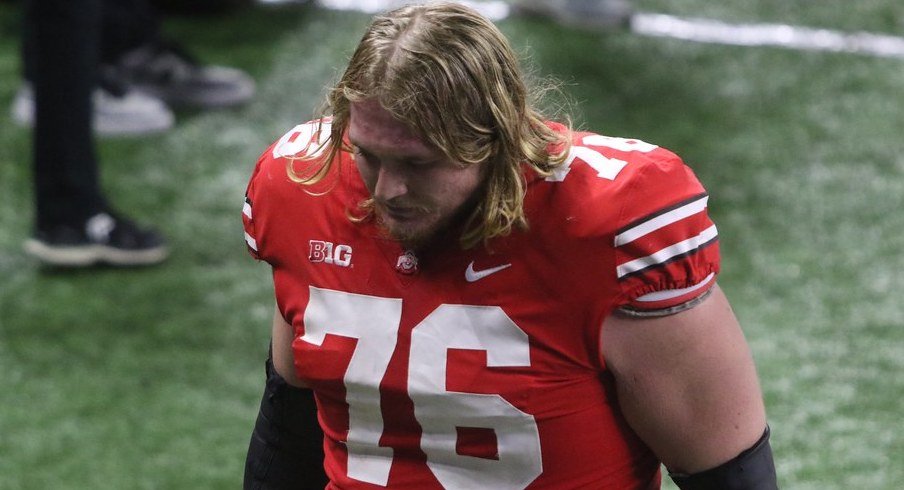 Projected starters on both sides of the ball will be absent for Ohio State in Thursday night’s season opener.

Miller had been tapped by Ohio State offensive line coach Greg Studrawa to be the Buckeyes’ new starting center early in preseason camp. Studrawa will now likely lean on either redshirt freshman Luke Wypler or redshirt junior Matt Jones at the position.

Wypler, a four-star recruit out of Montvale, New Jersey, in the class of 2020, saw just 15 snaps as a true freshman, but split time with Jones at center while Miller dealt with an injury this past spring.

Jones, another four-star recruit and the No. 68 overall prospect in the class of 2018, logged 205 snaps at guard for the Buckeyes in 2020, starting several games late in the season while the Ohio State front battled through COVID-19 absences and injuries. Jones had little experience playing center entering this spring, but split first-team reps at the position nonetheless as Miller was hurt.

Miller started most of the 2020 season at left guard, but slid to center – where he began his Buckeye career in 2019 – to start against Michigan State while Josh Myers was out with COVID-19. With Myers gone to the NFL, the former five-star recruit and Georgia native was long expected to take over the reins in the middle of Studrawa’s line.

Brown, a redshirt junior, had been in contention with redshirt freshman Ryan Watts for a starting spot at outside corner opposite senior Sevyn Banks, but will now miss the first game of the season for undisclosed reasons. Last season, Brown suffered a season-ending Achilles injury in the second game against Penn State in October. Brown missed full-contact work in the spring as he continued his recovery process, but returned for the Buckeyes at the start of fall camp.

Watts may earn the starting nod Thursday, but Ryan Day said Tuesday on 97.1 The Fan that sixth-year senior corner Demario McCall will see the field in the season opener. Redshirt freshman Lejond Cavazos and true freshman Denzel Burke could contend for snaps at the position as well.

Cage, a fifth-year senior, missed some time in camp with an undisclosed injury, but had been competing for the starting spot at nose tackle with sixth-year senior Antwuan Jackson. Now though, Jackson will likely get the nod alongside fifth-year senior Haskell Garrett, who is expected to start at 3-technique tackle.

Kickoff is scheduled for 8 p.m. as the fourth-ranked Buckeyes take on Minnesota in Minneapolis.