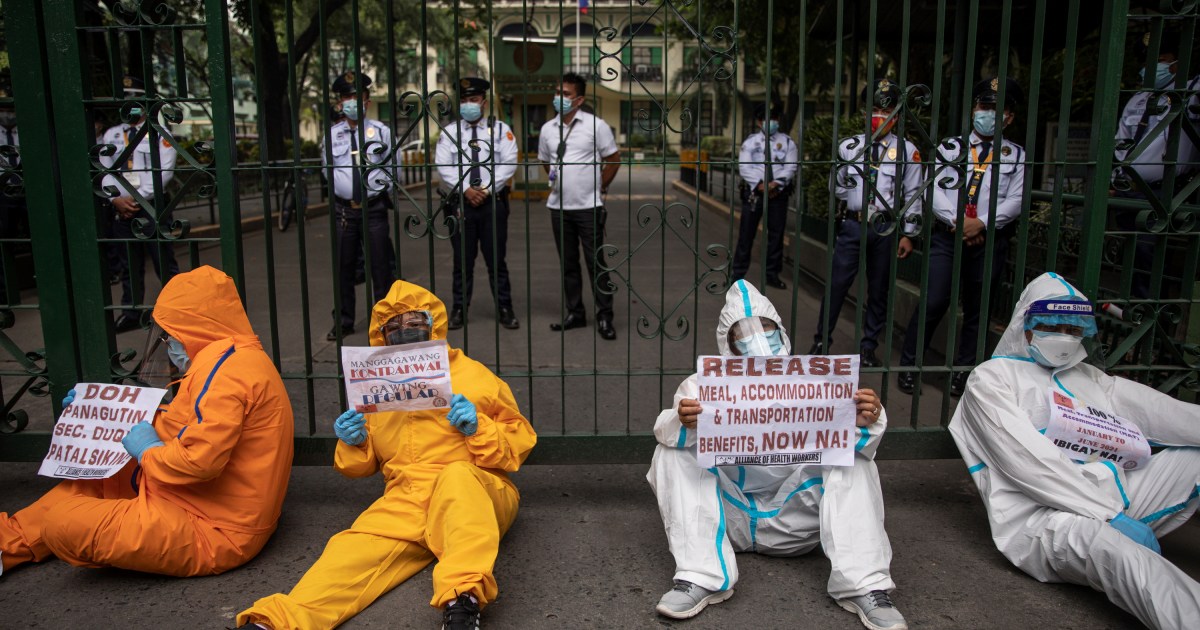 Scores of healthcare workers have protested in the Philippine capital to demand an end to what they called government neglect and unpaid benefits, as Delta variant cases continue to surge, putting more pressure on hospitals fighting one of Asia’s longest-running coronavirus epidemics.

The Philippines passed the two million mark in coronavirus cases on Wednesday, almost a quarter of those recorded in August alone.

Medical staff are overwhelmed and 103 new fatalities were reported on Wednesday, adding to the more than 33,000 COVID-19 deaths.

“It is sad that many of us have died, many of us became sick, and many have resigned or opted to retire early, yet we are still kneeling before the DOH to give us our benefits,” Robert Mendoza, president of the Alliance of Health Workers, said from the back of a pick-up truck.

On Tuesday, the World Health Organization’s representative in the country had announced that the Delta variant is now the dominant case in the Philippines.

“Certainly. With these kind of numbers, we are in community transmission of the Delta variant,” Dr Rabindra Abeyasinghe said in a media briefing.

He gave health and budget ministries 10 days from August 21 to pay health workers, following nurses’ threats to resign and unions’ warnings of strikes, but more than 100,000 of them have yet to receive their benefits.

“The government promised it will give the benefits today but up to now, it has not. I pity us because we are the ones begging,” said nurse Nico Oba.

Duterte has also stood by Health Minister Duque during repeated calls for his resignation, the latest after state auditors flagged “deficiencies” in more than $1bn in COVID-19 spending.

Duque on Wednesday told the Reuters news agency the government was working on the release of benefits but appealed for more time.

majority of the regions have ICU utilization rates beyond the 70% alarm level… #COVID19Ph #UPCOVID19PandemicResponseTeam #NRCPCCMon pic.twitter.com/jFbOI0uKaw

The Philippine Nurses Association held its own protest virtually to demand better working conditions and more staff at hospitals, nearly a third of which have reached “critical levels” of more than 85 percent occupancy, according to government data.

Like elsewhere in Southeast Asia, where vaccination rates are low, the highly transmissible Delta variant has seen deaths climb and cases soar, with a daily record 22,366 cases in the Philippines on Monday.

In an interview with a Manila-based TV channel, Dr Tony Leachon, a former adviser to Duterte on the COVID-19 response, warned the Philippines may soon be the epicentre of the pandemic in Southeast Asia.

He said the Philippines is now in “a perfect storm” given the rising number of cases, still-low vaccination rate and poor contact tracing system, weighed down further by a Congressional investigation on the alleged misuse of COVID-19 funds.

“The healthcare system will soon collapse if we will not be able to control,” he told ABS-CBN.