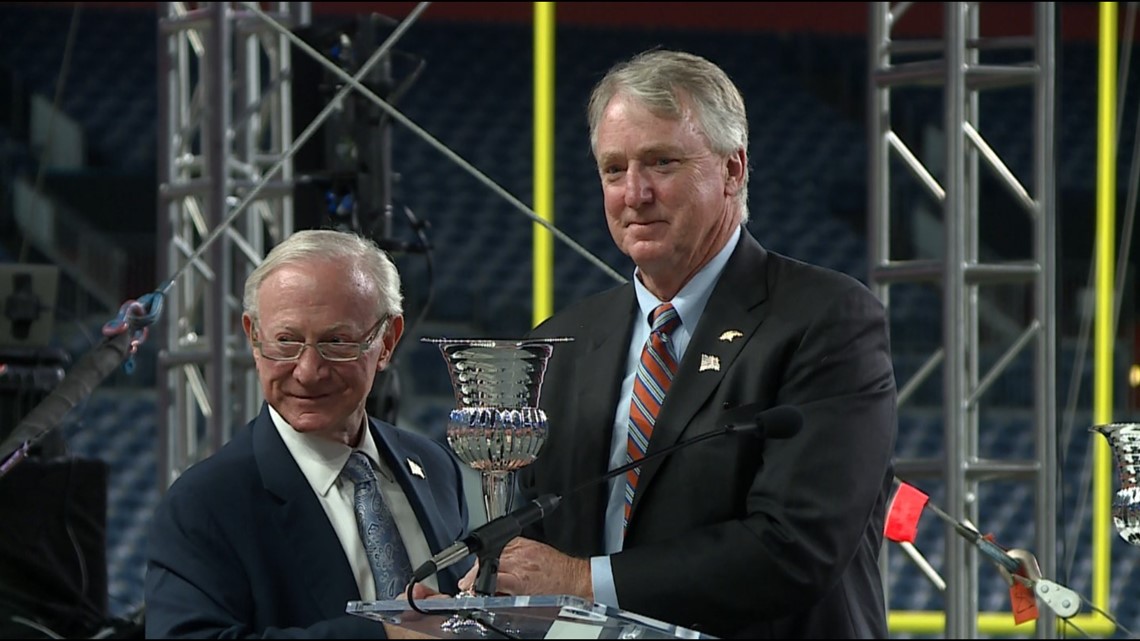 Ellis proud of organization’s work but said more wins need to happen on the field. Elway and Peyton among dignitaries who spoke at event that also remembered 9-11.

DENVER — Through good times and bad — and in recent years it’s been mostly bad — the Broncos have been a pillar in the Denver and Colorado communities through their charity work.

But while the Broncos have been acknowledged many times over in recent years for their community work, their football team has not performed to the team’s tradition the past four years, posting records of 5-11, 6-10, 7-9 and 5-11. Is Ellis torn between all the good work the Broncos have done for so many, yet are currently enduring one of their worst on-field periods of the past 50 years?

“The last four years, you’re definitely right about that,’’ Ellis said. “It’s disappointing. We as an organization are recognized for our good work but we’re in the business of football. FedEx does a great job of community work I’m sure, based out of Memphis, but if they’re not delivering packages on time it’s not great by us as consumers. And I’m not picking on them, but using as an example.

“If we’re not winning, it gets frustrating for fans. I respect that and we haven’t been winning lately. I’m looking forward to this year. I am. I’m hopeful things can get better but we have to judge it one game at a time and see where we are. But it’s frustrating to go through what we’ve gone through. Like I said back in July, I want a good season. And I know everyone who sits in this stadium come the third game of September (in the home opener against the Jets), they want a good season. They’re tired of bad seasons. So am I.”

It began as a somber program as there were many prayers and testimonies to the 20th anniversary of 9-11. Elway began his speech by thanking the first responders, military members and frontline workers, then for context mentioned how he has spent more than a quarter century with the Broncos as a player and executive.

“A lot has changed over that time … but one thing that has stayed the same is the Broncos’ dedication to the community,’’ Elway said. “And it starts at the top. Pat Bowlen really instilled the responsibility we have as the Broncos to give back. Joe has carried that tradition with the help of a lot of great people in the Broncos’ organization. When the torch was passed (from Bowlen to Ellis) it began a challenging time with a lot of uncertainty. But Joe navigated it with leadership and integrity while giving us every resource to be successful.”

Manning told a story about his first meeting with Ellis in 2012, just before he signed up for four terrific seasons in Denver and five more years here since he retired.

“I remember sitting with Joe in his office talking about what it’s like to play for the Broncos,’’ Manning said. “He had an incredible memory of past Broncos games. There was no big sales pitch. But the one thing I remember Joe telling me about was the special connection this community has with the team. He could not have been more right. In the last 9 years of calling Denver home, it’s easy to see the profound impact the Broncos have had on this community.’’

Ellis to the media before the ceremony said, “I’m flattered, first of all, and humbled to receive the award when you look at the list of recipients over the years. There’s a lot of terrific community leaders, senators, mayors and all sorts of people that Larry (Mizel) has honored. I think it’s more about the Broncos than it is about me. I’m just really proud of the organization and all the work that we’ve done.”

Ellis was asked if this was his final bow. He has said he plans on assisting in the ownership transition next year as the Broncos’ ownership moves from the Pat Bowlen Trust, in which he is one of three trustees, to either an outside investor, or to the Bowlen family with Brittany Bowlen as the controlling owner.

“There is no final bow here,’’ Ellis said with a smile. “That’s not what this is about. I said this to you in July, I’m looking forward to seeing the ownership transition through to its completion. And that’s what I’ll do. I’m not going to pick a date for you. And if you need a bow then, you can come find me.”

RELATED: Ellis: Broncos to begin transition to new owner after this season