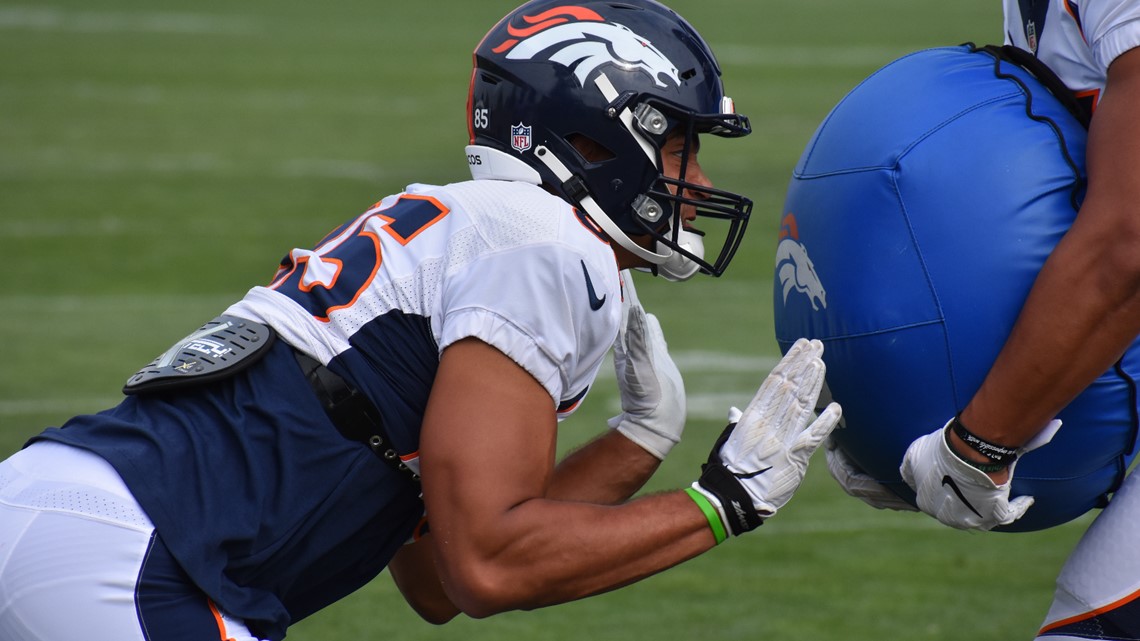 Bradley Chubb has missed practice this week because of an ankle injury. Should be ready by opener vs. Giants.

They were not only college teammates, they gave the Missouri Tigers a Stockton-Malone-like red zone connection with the quarterback Lock throwing 17 touchdowns in two years to the tight end who goes by Albert O.

>Video above: Teddy Bridgewater on preseason win over Rams.

Even last season with the Broncos, in the mere 3 ½ games the rookie Okwuegbunam played, Lock seemed to look first for his old college buddy whenever he was in the game. Okwuegbunam had 11 catches for 121 yards and a touchdown last year off just 86 offensive snaps before a torn ACL in a midseason game at Atlanta.

While that bond will always be there on a moment’s notice, Teddy Bridgewater now stands between them. Following a closely-contested quarterback competition that began during offseason practices and lasted through the four-week training camp and two preseason games, Broncos head coach Vic Fangio picked Bridgewater over Lock to be Denver’s starting quarterback.

As you’d expect between college buddies, Albert O. has been there for Lock.

“Of course I’ve talked to Drew since,’’ Okwuegbunam, who has recovered sufficiently from his ACL surgery, said Thursday. “Everything’s been super positive, though. He hasn’t been negative about it at all. Nobody on the team has. That wasn’t our decision, it was the coach’s decision. And whatever the decision was, which was Teddy, was obviously the right decision for the team so we’ve got to make it the right decision.

“I love Teddy and Drew both as people and quarterbacks. They’re both super talented and I’ve caught a lot of passes from them both. I’m super excited moving into the season with Teddy. Obviously, it’s different just because I’ve had Drew as a quarterback since college but I love Teddy as a quarterback. He’s thrown me a lot of good passes and I’m really excited to be catching hopefully a lot of touchdowns this season from him.”

Broncos starting outside linebacker Bradley Chubb missed practice Wednesday and Thursday because of an ankle injury. The new collective bargaining agreement is giving players off Friday, Saturday and Sunday so Chubb will have decent amount of time to heal up.

It’s the ankle opposite the one Chubb had surgically-repaired in mid-May. Fangio said Chubb played with ankle discomfort in the preseason finale Saturday against the Rams and will be ready to play in the season-opener Sept. 12 against the New York Giants. If Chubb needs to be spelled, the Broncos carried three backup outside linebackers on their season-opening, 53-man roster in Malik Reed and rookies Jonathon Cooper and Andre Mintze.

As has been discussed a time or thousand since the Broncos drafted cornerback Pat Surtain II, he is a top 10 draft talent with three veterans (Ronald Darby, Kyle Fuller, Bryce Callahan) ahead of him on the cornerback depth chart. To get Surtain on the field, Fangio is employing him as an outside corner, nickel corner and a dime linebacker.

“We’ve put a lot on his plate,’’ Fangio said. “He’s learning three positions. And it’s hurt his development at some of those positions, that’s just the way it’s going to be … but he’s been good at it. He’s very capable and he keeps growing in all three roles.”

Fangio is making a change to his practice schedule this year in part because of COVID-19.

In the past two years, Fangio liked to give the players Monday off after a Sunday game and bring them back for meetings and strength conditioning on Tuesday. This year he will bring them in Monday and give them Tuesday off.

“It wasn’t part of the thought process when I decided to do it but now they’ve changed the rules to where everybody’s getting tested (for the virus) once a week,’’ Fangio said. “So that test will occur on Monday. If you get a close contact-type thing where you have to be out (five) days, you still could be available for the game on Sunday. Where as if you wait for that test on Tuesday, you could run out of days.’’

RELATED: Broncos cut Royce Freeman after picking up another running back, Nate McCrary on waivers