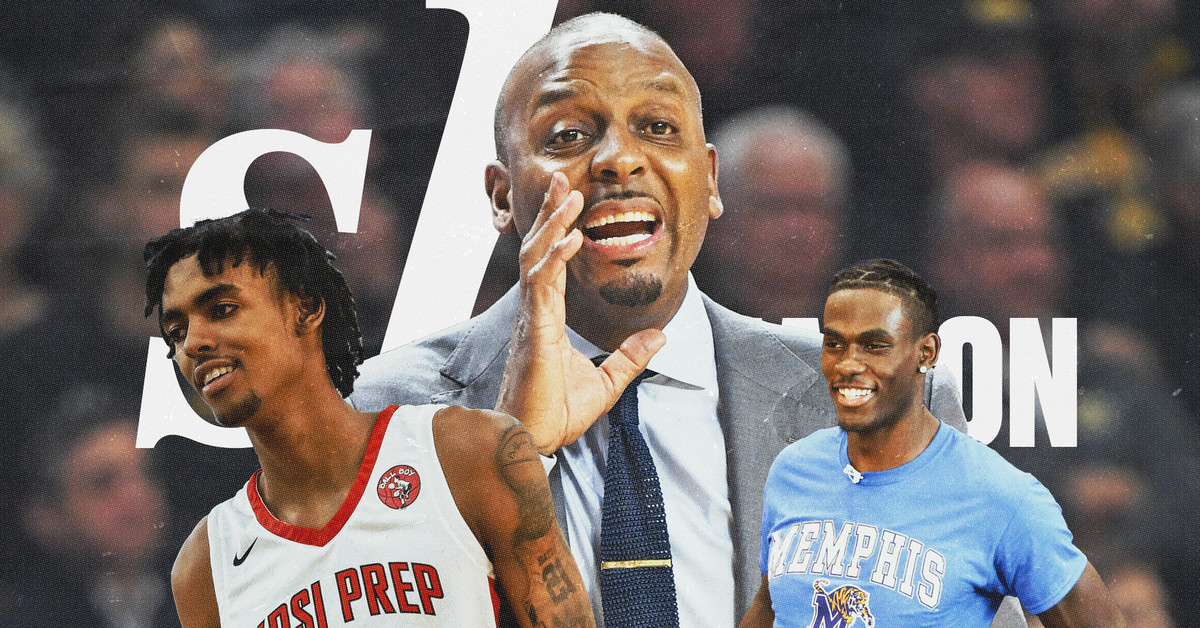 Penny Hardaway didn’t come to Memphis to win American Athletic Conference championships or build a sustainable NCAA tournament entrant. His ambitions were much bigger than that. When Hardaway returned to his alma mater as head coach, he wanted to make Memphis one of the premier programs in the country. Through his first three years, it’s been a work in progress.

Hardaway has won more than 20 games in each of his first three seasons. He landed the top recruiting class in America in 2019, headlined by No. 1 overall prospect James Wiseman. He’s built an identity for his team that starts on the defensive end: the Tigers finished with the best defense in DI last year, and they were No. 5 in the defensive efficiency rankings a year earlier. He’s taken Memphis basketball from something rarely made a blip on radar outside of the local market during the days of Josh Pastner and Tubby Smith and elevated it into a program that drives discussion on a national scale.

He also still hasn’t made the NCAA tournament. The Tigers did hang a banner as NIT champs last year, but that isn’t exactly worth bragging about. At some point, Hardaway has to win at a high level to justify the buzz. The pressure to do so starts now.

Emoni Bates — one of the hyped prospects of his generation — committed to Memphis recently. Somehow, he isn’t the highest ranked incoming recruit on the team. That honor goes to center Jalen Duren. The Tigers had what felt like a top No. 20 team in the preseason rankings before Bates joined, but they might be a top-10 team with the upside to win the whole thing. At least that’s the goal.

The Tigers are the most fascinating team in college hoops on the brink of a new season. Here’s why.

College basketball is entering a period of transition in terms of the coaches who have defined the sport. This is Mike Krzyzewski’s last dance at Duke. Roy Williams retired. Jim Boeheim is 76 years old. John Calipari, Bill Self, Jay Wright, and Tom Izzo are still doing their thing, but it feels like there’s room for a new face of college basketball to emerge.

Hardaway is the obvious candidate. He’s young and charismatic and has a built-in personal brand for his legendary NBA career. He’s the type of person that anyone who loves the sport will be attracted to regardless of their age. He was already a superstar as a player and is on the brink of earning the same status as a coach.

All he needs to do is win. It’s easier said than done.

Hardaway hired a big name assistant as soon as he took the Memphis job when he got Mike Miller to join the program shortly after he retired from the NBA. While Miller eventually moved on, Hardaway didn’t waste any time getting two more famed assistants this season: Larry Brown and Rasheed Wallace.

Brown is about to turn 81 years old, but he’s one of the best basketball coaches ever. He has experience in the college game by winning a national championship as head coach at Kansas in 1988 in addition to his NBA success. Today’s recruits may not know much about Brown, but he’ll be an invaluable resource to Penny on the bench as he tries to win at a high level.

Wallace is also an inspired hire. Only 46 years old, he should be able to connect to this generation of players in a way few other current college assistants can. The meme potential here is also off the charts. Wallace is responsible for so many classic phrases like “ball don’t lie,” “cut the check,” and “both teams played hard.”

Having Sheed and Larry Brown on the bench is only going to make Memphis even more buzz-worthy.

Bates was considered one of the best high school freshmen ever, but his hype dissipated a bit over the last year. None of the recent discourse matters anymore. Bates deserves a fresh start and a clean slate as he levels up to college, but he’s bound to be one of the most scrutinized players in the country regardless of how Memphis’ season goes.

Bates will be one of the youngest players in college basketball, not turning 18 years old until Jan. 28. He’s almost a year and a half younger than some of the other top incoming freshman, like Gonzaga center Chet Holmgren. Age matters in peer-aged competition. Expectations for Bates will be high because of his pedigree, but it feels unfair to expect him to dominate college basketball from the jump.

Bates’ best skill is his deep pull-up shooting, which should lead to plenty of great highlights. The microscope will really be on how he plays with his teammates, though. Bates has a reputation for forcing bad shots, and will need to prove he can play a winning brand of basketball. He’s reportedly going to handle the ball a lot of Memphis, and his biggest test will be using the threat of his scoring to set up his teammates for easy baskets with his passing. It’s a lot of responsibility to put on a 17-year-old.

Sources: Memphis plans to use Emoni Bates all over the floor, including EXTENDED time at point guard.

It’ll be a work in progress, but I was extremely impressed with his passing/court vision down at the Peach Jam last month.

Bates is too young to enter the 2022 NBA Draft, which means the Tigers could have him for two seasons. Keep in mind that Memphis has another top prospect for next year’s draft on the roster who will draw just as much attention.

Jalen Duren race to be the No. 1 overall draft pick

Duren passed Bates for the No. 1 player in the class of 2022 before both reclassified to join Memphis this season. The 6’10 center from Philadelphia has a 7’5 wingspan, a ridiculously developed frame, and emerging ball skills. We have him projected as a top-10 pick in the 2022 NBA Draft, but the top of the class is so wide open that it’s possible he can contend for the No. 1 overall pick with a strong year.

According to data provided by Cerebro Sports, Duren averaged 23.6 points, 15.1 rebounds, 3.3 assists, and four blocks per-40 with 57.4 percent true shooting during his run with EYBL champs Team Final this season. He should be a monster roll man from one day with the ability to punish switches in the paint on offense. Defensively, he’ll be expected to anchor a top unit for the Tigers just as Moussa Cisse and Precious Achiuwa have done as freshmen the last two years.

Check out some highlights of Duren’s play on the EYBL here:

You have to be a college hoops diehard to know who Deandre Williams is if you aren’t a Tigers fan. Williams started his college career at Evansville, where he helped his team upset Kentucky and emerged into one of the biggest mid-major stars in America. Williams transferred to Memphis ahead of last season, and immediately became the team’s best player. The Tigers were 4-3 without Williams, and 16-4 with him. Memphis probably would have made the tournament if Williams was immediately eligible.

Williams a 6’9, 190-pound forward who will turn 25 years old before the season. The Tigers ran the offense through him last year, and let his passing in the high post dictate their actions. Williams put up an impressive 26.4 percent assist rate, ranked top-10 nationally with a 4.7 percent steal rate, and also hit 45.5 percent of his threes on low volume (33 attempts in 20 games).

The big question for Memphis is how Williams fits around their two superstar freshmen. Penny would be wise to continue running the show through Williams and let Bates and Duren play off of him. There could be a spacing crunch on the floor though because Duren isn’t known for his shooting range, and Williams is too good to simply be used a spot-up shooter. This is ultimately a good problem to have, but it’s on the coaching staff to make all of this talent work.

Memphis has some other talented veterans

In addition to Williams, Memphis has some other really good returning players.

Landers Nolley is a 6’7 guard who transferred into the program last year after a standout freshman season at Virginia Tech. Nolley can get up threes with volume and play physical defense. As a sophomore at Memphis last season, he made 39 percent of 168 attempts from deep while posting a 2.2 percent steal rate.

Lester Quinones is mostly known for wearing incredibly short shorts, but he’s another high volume three-point shooter. The 6’5 guard hit 40 percent of his 110 attempts from three-point range last year. Quinones is also a good athlete who finishes well in transition (74th percentile, per Synergy Sports) even if he’s not much of a threat to run offense off the dribble.

Earl Timberlake would be the biggest addition of the offseason for most college basketball teams. Timberlake transferred in from Miami after an injury-filled freshman season, and continues to rehab his left shoulder. The 6’6 wing only played seven games for the Hurricanes, but his mix of size, strength, and athleticism jumped off the floor. He should be another monster defender for the Tigers who can get to the foul line on offense. Shooting will be his swing factor. We had Timberlake projected as the first round pick in the 2022 NBA Draft at No. 26 overall in our first mock for the class.

Memphis has another promising freshman in 6’9 wing Josh Minott, brings in brothers Chandler and Jonathan Lawson (you may remember Dedric and K.J. Lawson playing for Memphis a few years back), and has Alex Lomax as an experienced floor general who has been with Hardaway for years.

It’s on Hardaway to make the pieces fit

You could see Hardaway’s vision coming into focus at the end of last season when Memphis closed the year by winning 11 of their last 13 games en route to an NIT championship. While a few key pieces — Boogie Ellis, DJ Jeffries, and Moussa Cisse among them — have transferred out, the incoming talent is the most impressive lot in college basketball.

Hardaway is ready to ascend in the coaching world, but Memphis needs to justify the hype first. The only way it can happen is with a long run in the NCAA tournament. There’s no denying the talent he’s put in place, but the lack of a star point guard and the likely reliance on the freshmen create some potential pitfalls. Now it’s Penny’s turn to show how good he really is.