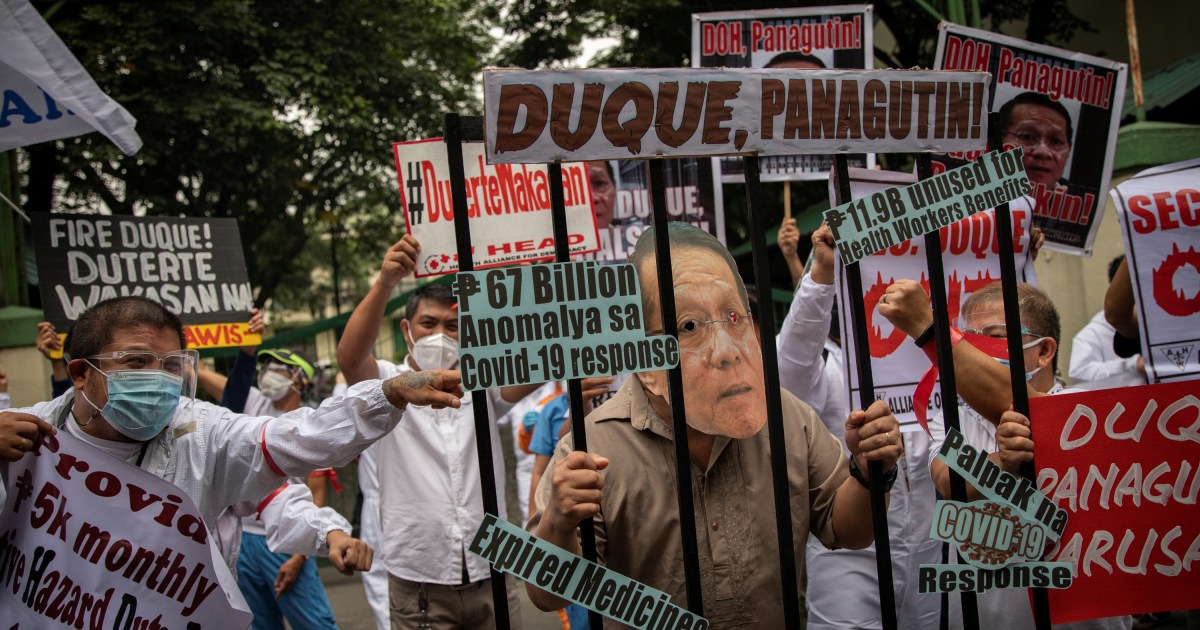 Scores of healthcare workers have protested in the Philippine capital to demand an end to what they say is government neglect and unpaid benefits, as pressure builds at hospitals fighting one of Asia’s longest-running coronavirus epidemics.

Protesters wearing protective medical gear gathered around the Department of Health (DOH) on Wednesday, holding placards demanding their risk allowances and hazard pay, as well as the resignation of Health Secretary Francisco Duque.

Medical staff have been overwhelmed during the pandemic and 103 of them have been among some 33,400 coronavirus fatalities in the Philippines.

“It is sad that many of us have died, many of us became sick, and many have resigned or opted to retire early, yet we are still kneeling before the DOH to give us our benefits,” Robert Mendoza, president of the Alliance of Health Workers, said from the back of a pick-up truck.

“The government promised it will give the benefits today but up to now, it has not. I pity us because we are the ones begging,” said nurse Nico Oba.

Many facilities are overstretched as the highly transmissible Delta variant sees deaths climb and cases soar, like elsewhere in Southeast Asia, where vaccination rates are low compared with Europe and North America.

The Philippines was the first country outside China to report a coronavirus death and has since logged nearly two million cases, including a daily record of 22,366 on Monday.

Duterte has stood by Duque during repeated calls for his resignation as far back as last year, the latest after state auditors flagged “deficiencies” in more than $1bn of COVID-19 spending