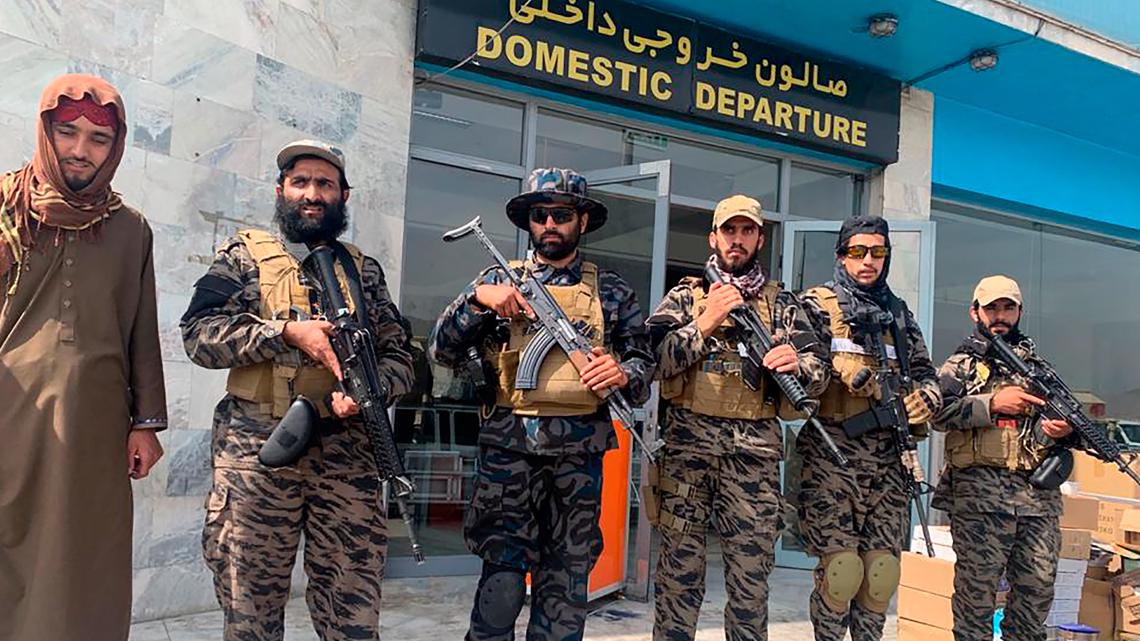 Vehicles with armed Taliban fighters raced back and forth along the airport’s sole runway on the northern military side of the airfield.

In a show of control, turbaned Taliban leaders were flanked by the insurgents’ elite Badri unit as they walked across the tarmac. The commandos in camouflage uniforms proudly posed for photos.

Getting the airport running again is just one of the sizeable challenges the Taliban face in governing a nation of 38 million people that for two decades had survived on billions of dollars in foreign aid.

“Afghanistan is finally free,” Hekmatullah Wasiq, a top Taliban official, told The Associated Press on the tarmac. “The military and civilian side (of the airport) are with us and in control. Hopefully, we will be announcing our Cabinet. Everything is peaceful. Everything is safe.”

Wasiq also urged people to return to work and reiterated the Taliban pledge offering a general amnesty. “People have to be patient,” he said. “Slowly we will get everything back to normal. It will take time.”

Just hours earlier, the U.S. military had wrapped up its largest airlift of non-combatants in history.

On Tuesday morning, signs of the chaos of recent days were still visible. In the terminal, rifled luggage and clothes were strewn across the ground, alongside wads of documents. Concertina wire stills separated areas while overturned cars and parked vehicles blocked routes around the civilian airport — a sign of measures taken to protect against possible suicide car bombers entering the facility.

Vehicles carrying the Taliban raced back and forth along the Hamid Karzai International Airport’s sole runway on the military side of the airfield. Before dawn broke, heavily armed Taliban fighters walked through hangars, passing some of the seven CH-46 helicopters the State Department used in its evacuations before rendering them unusable.

Taliban spokesman Zabihullah Mujahid addressed the gathered members of the Badri unit. “I hope you be very cautious in dealing with the nation,” he said. “Our nation has suffered war and invasion and the people do not have more tolerance.”

At the end of his remarks, the Badri fighters shouted: “God is the greatest!”

In an interview with Afghan state television, Mujahid also discussed restarting operations at the airport, which remains a key way out for those wanting to leave the country.

“Our technical team will be checking the technical and logistical needs of the airport,” he said. “If we are able to fix everything on our own, then we won’t need any help. If there is need for technical or logistics help to repair the destruction, then we might ask help from Qatar or Turkey.”

He didn’t elaborate on what was destroyed.

The airport had seen chaotic and deadly scenes since the Taliban blitzed across Afghanistan and took Kabul on Aug. 15. Thousands of Afghans besieged the airport, some falling to their death after desperately hanging onto the side of an American C-17 military cargo jet. Last week, an Islamic State suicide attack at an airport gate killed at least 169 Afghans and 13 U.S. service members.

During the evacuation, U.S. forces helped evacuate over 120,000 U.S. citizens, foreigners and Afghans, according to the White House. Coalition forces also evacuated their citizens and Afghans. But for all who got out, foreign nations and the U.S. acknowledged they didn’t evacuate all who wanted to go.

On Tuesday, after a night that saw the Taliban fire triumphantly into the air, guards now blearily on duty kept out the curious and those still somehow hoping to catch a flight out.

“After 20 years we have defeated the Americans,” said Mohammad Islam, a Taliban guard at the airport from Logar province, cradling a Kalashnikov rifle. “They have left and now our country is free.”

“It’s clear what we want. We want Shariah (Islamic law), peace and stability,” he added.

Zalmay Khalilzad, the U.S. special representative who oversaw America’s talks with the Taliban, wrote on Twitter that “Afghans face a moment of decision & opportunity” after the withdrawal.

“Their country’s future is in their hands. They will choose their path in full sovereignty,” he wrote. “This is the chance to bring their war to an end as well.”

But the Taliban face what could be a series of major crises as they fully take over the government. The majority of the billions of dollars Afghanistan holds in foreign reserves is now frozen in America, pressuring its now-depreciating Afghani currency. Banks have implemented withdrawal controls, fearing runs on their deposits in the uncertainty. Civil servants across the country say they haven’t received their salary in months.

Abdul Maqsood, a traffic police officer for the past 10 years on duty near the airport, said he hadn’t paid for the past four months.

“We keep coming to work but we are not getting paid,” he said.

Medical equipment remains in short supply, while thousands who fled the Taliban’s advance remain living in squalid conditions. A major drought also has cut into the country’s food supplies, making its imports even more important and raising the risk of people going hungry.

Also in question are the rights of women, who faced oppression under the Taliban’s earlier rule.

Schools have reopened, and on Tuesday morning dozens of elementary school students headed to schools in a neighborhood near the airport. The Taliban have ordered schools to be segregated but it is often not enforced for younger children.

“I am not afraid of the Taliban,” said Masooda, a fifth-grade student.

During the evacuation, U.S. forces helped evacuate over 120,000 U.S. citizens, foreigners and Afghans, according to the White House. Coalition forces also evacuated their citizens and Afghans. But for all who got out, foreign nations and the U.S. acknowledged they didn’t evacuate all who wanted to go.