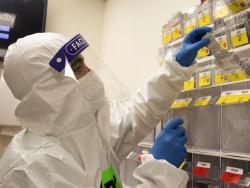 MISSION, Kansas (AP) — The COVID-19 surge is stretching oxygen supplies and sending hospitals scrambling for more ventilators, even as there are signs of hope that the spread of the virus is slowing down in pockets of the United States.

In Tulsa, Oklahoma, a hospital recently called 911 after coming within just a few hours of running out of oxygen because they needed an emergency transfer for a patient on high-flow oxygen.

The hospital got a shipment later that day, but the experience was a warning to other hospitals, said Dr.= Jeffrey Goodloe, the chief medical officer for the EMS system that serves Tulsa and Oklahoma City.

“There is no, ‘that is happening over there.’ There is here in a heartbeat.”

The oxygen shortages are yet another sign of the toll that the summer COVID-19 resurgence has taken on the nation’s hospital system.

A handful of states including Florida, Oregon, Hawaii, Mississippi and Louisiana have set pandemic records for the number of COVID-19 hospitalisations, and many hospitals are dangerously short of staff and intensive care unit beds.

There is some good news, however.

The country is averaging 155,000 new infections a day, but the caseload trajectory has slowed down dramatically from earlier in August.

Florida, Missouri, Arkansas, Louisiana and Mississippi had slight declines in cases over the last two weeks.

Florida has seen a dip in COVID-19 admissions in recent days, as have hospitals in Springfield, Missouri, an early epicentre of the delta variant-driven surge.

Vaccination numbers are also up, and White House COVID-19 coordinator Jeff Zients credited vaccine mandates that have been implemented across the country, including restaurants, workplaces, sports stadiums and schools.

In August, we got over 14 million.

But the numbers haven’t budged much in the one week since the US Food and Drug Administration gave full approval to Pfizer for its vaccine after reviewing six months of safety data.

The seven-day average for vaccine doses administered across the US rose to 898,000 on Monday, up from 853,000 one week earlier.

Deaths are also on the rise, averaging more than 1,300 a day, in what health officials have predicted would happen as a result of the massive rise in cases and hospitalisations over the last month.