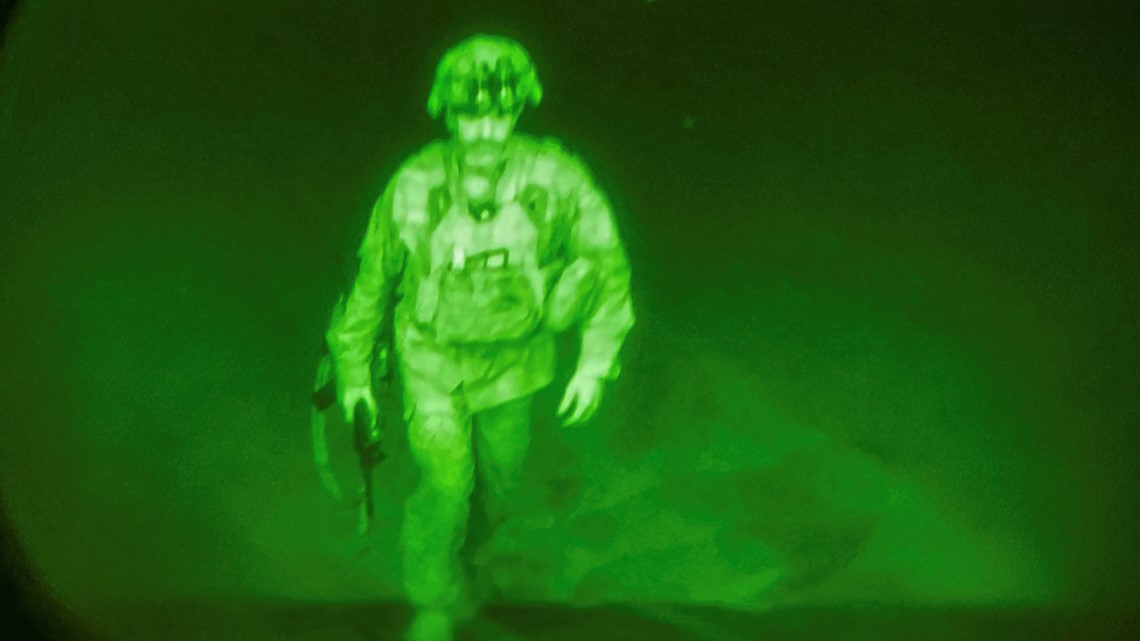 The Pentagon released a photo of the final American soldier to step foot off Afghanistan soil, ending a nearly 20-year war.

The United States ended its nearly 20-year war in Afghanistan Monday and the Department of Defense has released the name of the final service member to step foot off Afghan soil.

Hours ahead of President Joe Biden’s Tuesday deadline for shutting down a final airlift, and thus ending the U.S. war, Air Force transport planes carried a remaining contingent of troops from Kabul airport. Thousands of troops had spent a harrowing two weeks protecting the airlift of tens of thousands of Afghans, Americans and others seeking to escape a country once again ruled by Taliban militants.

In announcing the completion of the evacuation and war effort. Gen. Frank McKenzie, head of U.S. Central Command, said the last planes took off from Kabul airport at 3:29 p.m. Washington time, or one minute before midnight in Kabul.

The Pentagon released a night vision image of Maj. Gen. Chris Donahue, commanding general of the 82nd Airborne Division, as he boarded a C-17 at Kabul Airport and identified him as, “The last American soldier to leave Afghanistan.”

His biography on the Army’s website said he has deployed 17 times in support of operations in Afghanistan, Iraq, Syria, North Africa, and Eastern Europe.

“His military education includes the Infantry Officer Basic and Advanced Courses, the Naval War College, and the US Army War College Fellowship at Harvard University,” the website said.

Secretary of State Antony Blinken put the number of Americans left behind at under 200, “likely closer to 100,” and said the State Department would keep working to get them out. He praised the military-led evacuation as heroic and historic and said the U.S. diplomatic presence would shift to Doha, Qatar.

Biden said military commanders unanimously favored ending the airlift, not extending it. He said he asked Blinken to coordinate with international partners in holding the Taliban to their promise of safe passage for Americans and others who want to leave in the days ahead.

The airport had become a U.S.-controlled island, a last stand in a 20-year war that claimed more than 2,400 American lives.