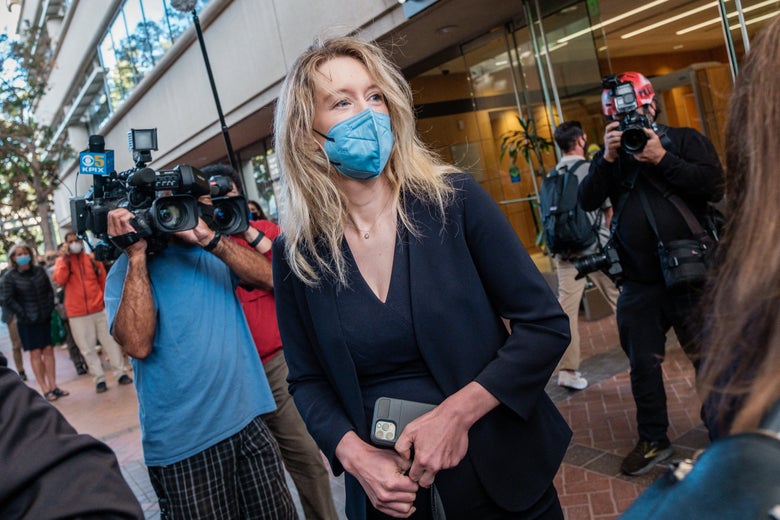 Jury selection for the trial of Elizabeth Holmes, founder and CEO of the disgraced blood-testing startup Theranos, began on Tuesday. Federal prosecutors have charged Holmes with multiple counts of fraud and conspiracy, alleging that she misled patients, doctors, and investors about the effectiveness of her company’s technology, which could supposedly diagnose a wide variety of medical conditions with a finger prick. Investigations by the Wall Street Journal and federal officials beginning in 2015 found that Theranos’ devices were providing inaccurate results, and that in many cases the company was using its competitors’ technology to run tests with diluted blood samples. Over the weekend, unsealed court documents revealed Holmes’ planned defense: that emotional and sexual abuse from Ramesh “Sunny” Balwani, the former president and chief operating officer of Theranos, during their romantic relationship impaired her mental state.

Holmes, 37, and Balwani, 56, worked together closely to build up Theranos and maintained a secret relationship during that time. They first met in Beijing while Holmes was attending a Mandarin language program in the summer before her first year at college, and they later formed a partnership in leading Theranos in which Holmes reportedly handled big-picture ideas and the board of directors, and Balwani oversaw partnerships and day-to-day operations. Filings indicate that she intends to accuse Balwani of controlling and manipulating her by withholding affection if she displeased him and dictating how much she could eat, what she wore, how much she could sleep, and whom she could speak to. She is also prepared to claim that he threw “sharp, hard objects” at her. Holmes’ lawyers wrote in a court document, “This pattern of abuse and coercive control continued over the approximately decade-long duration of Ms. Holmes and Mr. Balwani’s relationship, including during the period of the charged conspiracies.” Her lawyers also plan to have Mindy Mechanic, a psychologist who specializes in intimate partner abuse who evaluated Holmes, testify during the trial.

While Balwani has his own trial next year for alleged crimes committed as a Theranos executive, it is Holmes whose face, name, and voice became practically synonymous with the company. Reporting on the rise and fall of Theranos has often portrayed Holmes and Balwani as collaborators in the alleged deceptions. So Holmes’ legal strategy may come as a surprise. But could it work?

By raising these abuse allegations, Holmes is mounting what’s known as a “mental disease or defect” defense in which she’s arguing that she can’t be held responsible for her actions because of the trauma from the relationship. “If a jury finds that she has proven this, it’s essentially finding that because of a severe mental disease or defect, she was either unable to appreciate the nature of her acts or the wrongfulness of her acts,” said Miriam Baer, a professor at Brooklyn Law School who specializes in corporate and white-collar crime. The accusations against Balwani complicate what otherwise might’ve been a traditional fraud case in which the government would set out to show what Holmes knew, analyze ways in which her statements were allegedly misleading, and perhaps brings up ways in which she tried to conceal certain information. Holmes’ defense partly shifts the narrative away from fraud. “This claim of intimate partner abuse introduces a whole new narrative, and that narrative has the potential to cause the jury to question the story that they hear from the prosecution’s witnesses,” said Baer. “That means the jury is potentially going into that deliberation room unsure of what really happened, and that lack of certainty and ambiguity can’t help but benefit the defendant.”

This kind of defense is fairly unusual, particularly in corporate cases. “The classic case is an abused partner then harming or killing the abuser,” said Thomas Joo, a professor at the University of California–Davis school of law who specializes in white-collar crime and corporate governance. In order for this defense to succeed in Holmes’ case, her lawyers have to first prove that the abuse actually happened, and then show that it in fact influenced her to lie about Theranos’ technology. Joo notes that this strategy may be more effective in neutralizing allegations of misleading investors than of misleading doctors and patients. “Balwani appears to have been the finance person, and he’s not a scientist, so the idea that he manipulated her may be a stronger argument with respect to statements she made about finances, because he controlled that area,” Joo said. “With respect to the patients and doctors, the financial health of the company is not relevant. It’s really about whether the product worked or not.” Balwani initially joined Theranos in 2009 to help with its e-commerce operations after working at Microsoft and Lotus as a software engineer. He quickly rose the ranks of the company to become one of its top executives, though Holmes was clearly the face of the company in the media, and famously convinced famous figures like George Shultz to invest and serve on the board.

It’s unclear how Holmes’ defense will play out in the court room because we don’t know what and how much evidence her lawyers are planning to present regarding the alleged abuse. The strategy does have its risks, though, partly because Holmes’ lawyers have to do the extra work of proving something rather than just casting doubt on the prosecution’s arguments. “The defense is difficult to prevail on; it requires the defendant to prove it with clear and convincing evidence,” said Baer. “It’s such that it may result in a defendant deciding that he or she would be best served by testifying, which can itself open up new problems.” Indeed, defense lawyers are typically wary of having defendants take the stand because it opens their clients up to cross examination. At the same time, though, the strongest evidence that Holmes’ lawyers can introduce to prove that she was psychologically damaged due to abuse is likely her own personal testimony. “It’s always an enormous risk when a defendant testifies, but in this case, it appears that the jury will likely be very eager to hear her side of the story,” said George Demos, a former Securities and Exchange Commission enforcement attorney and adjunct professor at the UC–Davis School of Law. “The big risk for Holmes is that if she lies about anything on the stand, no matter how seemingly irrelevant, the jury will then conclude that she’s lying about the underlying charges in the case.” Demos adds that the prosecution is likely to try to poke holes in the defense’s claims about her mental state and lack of agency by examining “evidence about her control of communications, employment decisions, legal matters, and other financial decisions that would demonstrate that, in fact, she was the one in control and making the decisions, not Sunny.”