Sign up to myFT Daily Digest to be the first to know about Canadian National Railway Co news.

UK hedge fund manager Chris Hohn has demanded that Canadian National abandon its $34bn pursuit of Kansas City Southern, after a US railroad regulator rejected the way the transaction was structured as it held the potential to harm the public interest.

In a letter to the board of CN seen by the Financial Times, the head of TCI, one of the largest shareholders in the Montreal-based company with a 5 per cent stake worth about $4bn, also called for the resignation of CN’s chair Robert Pace and chief executive Jean-Jacques Ruest. TCI has recommended Jim Vena, who has worked at CN in the past and at rival Union Pacific, as the person to run the company.

The activist investor’s move followed a decision by the US Surface Transportation Board to reject CN’s request to create a temporary voting trust, whereby shareholders in KCS would be paid before the transaction had received full approval by the regulator. CN shares rose 7.3 per cent on Tuesday.

CN and KCS could still choose to go ahead with the transaction without using a voting trust, but the regulator’s decision is likely to derail the deal altogether as shareholders of the US company are more likely to back an alternative union with rival railway group Canadian Pacific.

“CN should immediately withdraw from its agreement to by KCS,” Hohn told the FT. “The CN board should not proceed without a voting trust because it would be hugely value destructive, cost billions in break fees and would distract management at a time when the business is underperforming.

“The CN board has consistently misjudged the STB and the predictions of the board have been consistently wrong. As a result the [CN] board now lacks all credibility and so the chairman and CEO should resign,” added Hohn.

CP had previously reached an agreement to buy KCS, but it was later terminated after the US company received a better offer by CN. CP made a new offer to buy KCS in early August that was worth about $31bn, including debt, as it expected that STB would reject the use of a voting trust for CN.

“The STB decision clearly shows that the CN-KCS merger proposal is illusory and not achievable,” said Keith Creel, CP chief executive. “Knowing this, we believe the August 10 CP offer to combine with KCS, which recognises the premium value of KCS while providing regulatory certainty, ought to be deemed a superior proposal.”

CN did not have immediate comments on the matter. 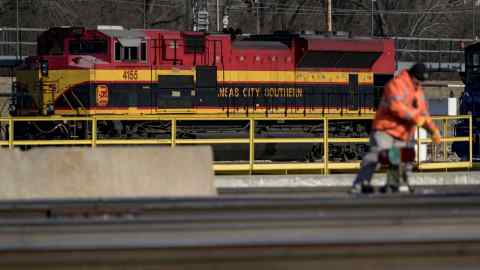 TCI is also the largest shareholder in CP, with an 8.4 per cent stake. The hedge fund manager is in favour of a deal between CP and KCS as a merger between the two smallest players in the industry would have a higher chance of obtaining regulatory approval. KCS’s combination with CN would create North America’s third-largest railway operator.

The bitter takeover battle for the US freight railroad company underscores how crucial KCS is to both Canadian companies as it would allow either to link their existing operations from Canada to Mexico through the US at a time when cross-border trade is expected to pick up significantly.

Under the terms of the $34bn agreement, CN could be forced to pay a $1bn termination fee, but that could be waived if both sides agreed to part ways amicably.