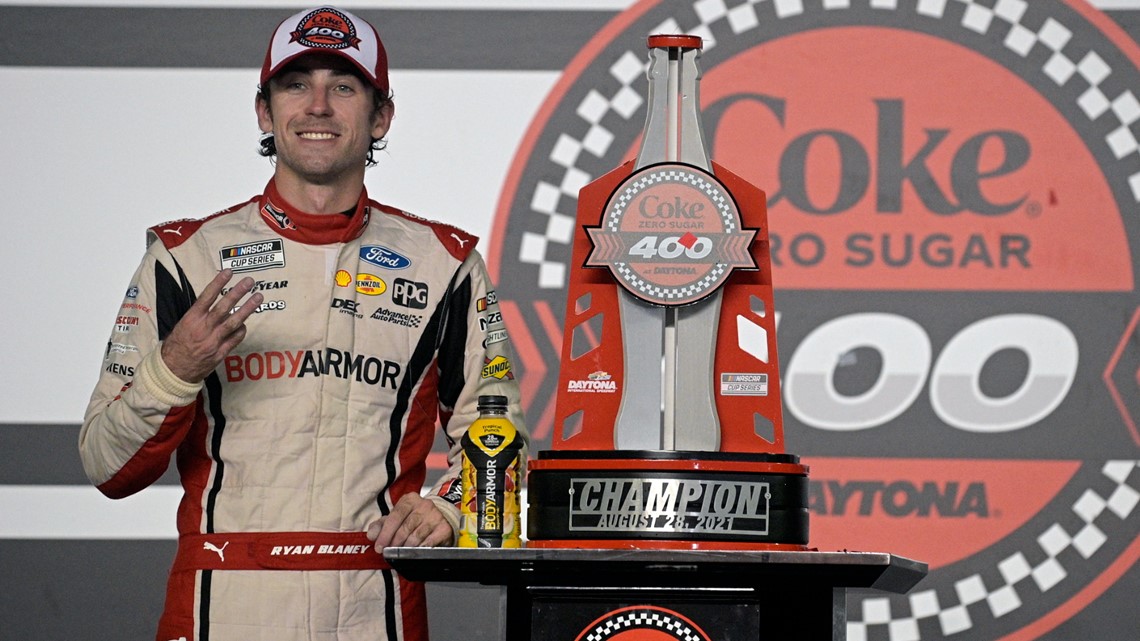 Ryan Blaney, the winner in Michigan last week, heads into next week’s playoff opener at Darlington Raceway with three victories this season in his Team Penske Ford.

DAYTONA BEACH, Fla. — For all the potential outcomes that could have occurred at Daytona International Speedway on Saturday night, the NASCAR Cup Series regular-season finale was somewhat predictable.

Ryan Blaney ended up in victory lane for the second straight week. Kyle Larson, the most dominant driver all year, took home the regular-season trophy. Tyler Reddick ended up with the 16th and final playoff spot. And the race ended in overtime with a fiery crash that involved nearly half the field.

Take a look at the incident that brought out the caution on the final lap of the #CokeZeroSugar400. pic.twitter.com/zA7a6LVpKm

He was hardly alone. Drivers ripped the revamped aerodynamics package and bemoaned the usual aggressive driving that caused three wrecks in the final 20 laps.

Reddick got caught up in the first one but rebounded to finish sixth. He needed only to beat Richard Childress Racing teammate Austin Dillon and hope for a repeat winner to earn his first playoff berth.

Reddick and Dillon were both in contention to make a desperate, last-gasp push for the win in the two-lap overtime sprint to the finish. But Blaney, who was second on the restart, cleared traffic thanks partly to a bump from Corey LaJoie and was well ahead of the pack when a crash ended the race.

Daniel Suarez, one of 10 drivers in the front pack trying to win the race to earn the automatic playoff berth, turned Kevin Harvick to trigger the multi-car melee. Suarez seemed to be pushed into Harvick from behind by Kurt Busch.

Blaney, the winner in Michigan last week, heads into next week’s playoff opener at Darlington Raceway with three victories this season in his Team Penske Ford.

The regular-season finale had fairly low stakes since 15 of the 16 playoff slots were claimed beforehand. It meant only a first-time race winner could edge Reddick or Dillon for the final spot.

Neither had a smooth night: Reddick’s car suffered crash damage in an earlier incident and Dillon was first flagged for speeding on pit road and also battled voltage issues in his Chevrolet.

“I don’t know how to smile at this point. It was a lot tonight,” Reddick said. “I’m excited to be past it.”

Dillon had still rallied to fourth on the final restart but was collected in the race-ending crash.

“We gave it all we could and fought until the end,” Dillon said. “We’ll finish hard this year and build on next year.”

Hamlin held the regular-season lead for 22 weeks until Larson claimed it two races ago at Indianapolis. Larson overcame a 166-point deficit to Hamlin to earn the title.

“What an awesome year he’s had,” said team owner Rick Hendrick, who gave Larson a job this season after he missed most of 2020 while suspended for using a racial slur.

Chris Buescher finished second, one spot short of earning the automatic berth into the playoffs he was seeking. But it was a 1-2 finish for Ford.

“To miss that playoff spot by one spot, that’s a tough ending to a day,” Buescher said. “I’m sure I’ll play it back and find something else different.”

Bubba Wallace was a season-best third but frustrated he had no help from any Toyotas at the end of the race. Hamlin, his team owner at 23XI Racing, was the closest Toyota driver to Wallace at the finish — way back in 14th.

“I’m a little frustrated, I’m the one who gets called out for not working with teammates and I’m the one that gets left hanging,” Wallace said. “There’s a reason why Ford’s in victory lane, cause they always work together.”